LAST week I wrote a story about the jazz guitarist Kenny Burrell, who celebrates his 80th birthday with a concert at Royce Hall on Saturday. In the course of it, I corresponded with music historian Ted Gioia about Burrell and some related issues concerning the past and future of the art form. 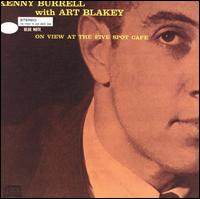 I’ve included here our exchange. Gioia’s The History of Jazz, on Oxford University Press, was recently published in a new edition.

1) Two of his Midwestern contemporaries — Wes Montgomery and Grant Green — had signatures: Octaves and an expanded harmonic sense for the former, a churchified single-line style for the latter… Does Burrell have anything as immediately recognizable? What defines his playing?

Younger jazz players pride themselves on their skill in mimicking different styles or approaches, but Kenny Burrell embodies the jazz tradition.  He is a master of the blues.  He understands Ellington, bop, hard bop and cool at a very deep level.  When I hear him, I feel as if the best of the music’s past is channeled effortlessly through his guitar.
I sometimes think that phrasing is a lost art in jazz, and perhaps especially among guitarists.  Even first rate performers can end up playing with their fingers, when they ought to be guided by their heart and ears.  But Burrell knows how to shape a phrase, where to place the proper emphasis, how to construct a solo.  He has unerring instincts — like a great boxer, who has a feel for right move at the right moment.
2) He’s outlived those two, and most musicians of his generation. Has his style evolved or his playing deepened since then, or did he sort of peak around the time of Midnight Blue?

Burrell has made outstanding recordings in every decade.  His early albums, such as Guitar Forms and Midnight Blue, are probably the best known, and rightly praised.  But check out his 75th birthday album, which shows him still at the top of his game.  And don’t underestimate the poise and self-confidence Burrell demonstrated during the fusion period and after, serving as a champion for the jazz heritage even while his peers imitated the theatrics of rock.   With his mastery of the guitar, Burrell would have been forgiven for watering down his music in exchange for a taste of rock auditorium fame, but he stayed true to his own core values.

3) JL Collier describes the guitar as being unusual among jazz instruments in being pioneered and defined largely by white players — Lang, Django, and on. (It strikes me that today’s Big Three are also all Caucasian.) Is there anything to this, and if so, what do we make of a player, like Burrell, who is so consistently drenched in the blues. There’s something interesting, isn’t there, about his use of an African-Amer form for an instrument that has not been defined by African Americans.

The African-American tradition in the development of jazz guitar is much stronger than Collier’s comments may suggest.  No one had greater influence on the role of the guitar in jazz than Charlie Christian, and the whole blues guitar tradition — which strongly shaped the jazz sensibility — is almost entirely the contribution of black players.  The more interesting  change happened later.  With the rise of rock music, the electric guitar entered the mainstream as a default instrument of Middle American teenagers and the defining sound of popular music.  Burrell came of age during this period, but he held firmly to his own tradition, his own approach, his own set of values.  In any era, jazz artists earn praise by channeling their own personal vision through their instrument, but Kenny Burrell did this at a time when there were many, many ways for a jazz guitarist to go astray.

4) Burrell faults the classical establishment for not embracing jazz as “America’s classical music,” leaving this stuff to be crushed by the pop world…He admires Wynton’s formal take on jazz and his assertion of jazz’s status as an art music that needs the kind of support and concert halls as orchestras/chamber music. I recall this battle from the early ’90s and founding of Jazz at Lincoln Center. How do you come down?
I feel that much of the hostility aimed at Jazz at Lincoln Center or Wynton is misguided.  We need institutions to preserve the tradition.   This does not come at the expense of those who want to move the tradition ahead.  Blowing up the Mozart Festival does nothing to enhance the opportunities for modern composers.  Burning old books doesn’t get people to read new ones.
5) Because of the number of talented and well-trained players leaving universities to find limited playing opportunities, Burrell wants to launch an LA based big band (18 pieces) that will start small but eventually have a real season and become a West Coast version of Jazz at Lincoln Center and inspire similar projects in other cities. Does this seem at all feasible?

You need more than great players to create a vibrant jazz scene, you also need the right institutions.  People who only know Kenny Burrell as a guitarist probably aren’t familiar with all the work he has done off-stage to support and advance jazz on the West Coast.  His vision of a LA-based counterweight to JALC is very much in accord with his other efforts over the years.  I hope he succeeds.

6) I imagine Burrell, who has taught at UCLA since 1978 and founded the jazz program in ’96, is to some a symbol of the move of jazz into academia. Does this transition from brothels and commerce into universities seem to have helped the music at any level?

If I can compare the jazz scene today with the situation when I was coming of age during the 1970s, most of the conditions have worsened.  There is less jazz on the radio today, less jazz on TV, fewer jazz clubs and less visibility of jazz in the broader culture — but the single area that has changed for the better is the growing support of jazz from universities and arts institutions.   Many complain about jazz turning into an academic discipline.  But those of us who remember what it was like when jazz was excluded at universities find it hard to see this as a negative trend.

Here is some information on my book, which Yale University Press published in 2015. (Buy it from Powell's, here.) Some advance praise: With coolness and equanimity, Scott Timberg tells what in less-skilled hands could have been an overwrought horror story: the end of culture as we have known … END_OF_DOCUMENT_TOKEN_TO_BE_REPLACED