THE other morning — it was the 4th of July — the phone rang. It was Eddie Izzard calling from England. I’d had no caffeine yet. And due to the holiday — on a Monday no less — and a kid who’d just gotten out of the emergency room, I’d completely forgotten that he’d be calling. 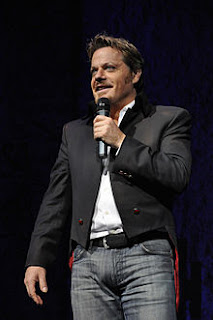 But Izzard ended up being a perfect gentleman and we spoke for a while about his career and the figures who’d shaped him, including some of my very favorites, The Beatles and Monty Python. He talked very sincerely about his debts to earlier comic figures and referred to himself as an inheritor of a rational, humanistic tradition going back to Darwin and beyond.

HERE is my brief feature on the comedian, who I look forward to seeing perform tonight at the Hollywood Bowl. Be there or be square.

Here is some information on my book, which Yale University Press published in 2015. (Buy it from Powell's, here.) Some advance praise: With coolness and equanimity, Scott Timberg tells what in less-skilled hands could have been an overwrought horror story: the end of culture as we have known … END_OF_DOCUMENT_TOKEN_TO_BE_REPLACED