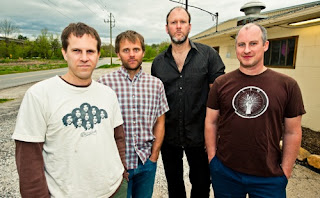 WHEN the band filed at the Troubadour the other night, I wondered if this might be an Archers of Loaf cover band — a Chapel-Hill-meets-’90s nostalgia version of Beatlemania. But despite the fact that gawky, bespectacled Eric Bachmann has transformed himself into a lumber jack since the band’s late-’90s breakup (don’t rock musicians usually waste away?), this was the Archers of old — all the hummable melodies, modern jazz-meets-Sonic Youth-inspired harmonic weirdness, the onstage jumping around, and those unforgettable songs like “Web in Front” and “Wrong.”

This was one of those reunions I never thought I’d see, and I certainly did not think this North Carolina band that never got its due would make it to the West Coast. (They ended up with two sold-out nights at the Troubadour to kick off a whole West Coast tour.) I went to school in Chapel Hill in the early ’90s, so this is a band I’ve been seeing for a long time — real pleasure to see their genius undiminished.

HERE is a Spin piece by my Raleigh-based colleague on their reuniting. The tour still comes through New York, Chicago, Atlanta, DC, Phil, NC, San Francisco, Portland and Seattle.

The band’s albums are also being reissued by Merge.

All hail the Archers!!

Here is some information on my book, which Yale University Press published in 2015. (Buy it from Powell's, here.) Some advance praise: With coolness and equanimity, Scott Timberg tells what in less-skilled hands could have been an overwrought horror story: the end of culture as we have known … END_OF_DOCUMENT_TOKEN_TO_BE_REPLACED