SCOTT Avett plays his banjo like Will Sergeant from Echo and the Bunnymen played guitar. That’s what the Avett Bros. manager thought the first time he saw this North Carolina band, which is both deeply rooted in Americana and on its own trip. 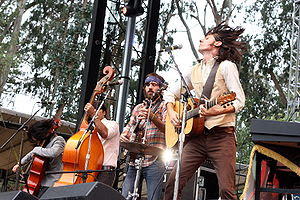 ALT-COUNTRY heroes The Avett Bros. are in town tonight, Oct. 1, at the Nokia Theater. I spoke to Scott and manager Rolph Ramseur for this story in today’s LATimes.


I was a bit late coming to these guys, but they remind me in some ways of The Band in their attempt to connect rock with old-time music. Scott was as convincingly sincere and humble as any musician I’ve spoken to. (I can — poorly — play a few of their songs on guitar, like “Murder in the City” and “Will You Return”.)


Here he told me how he discovered the banjo, which came later than you’d think:


“We were just totally into hard rock then — we were in a skate-punk scene,” he says. “I wanted something ironic. And when I started playing street corners, I could hear this thing just project. We went all over the country, all the way to San Francisco and Seattle, and that banjo just projects down the street!”

Here is some information on my book, which Yale University Press published in 2015. (Buy it from Powell's, here.) Some advance praise: With coolness and equanimity, Scott Timberg tells what in less-skilled hands could have been an overwrought horror story: the end of culture as we have known … END_OF_DOCUMENT_TOKEN_TO_BE_REPLACED