IT’S been four years since the Glasgow indie rock band Belle & Sebastian came to America. I remember that show, in which they were accompanied by the Los Angeles Philharmonic, in part because of its sheer wonder. Also, because my wife and I were such fans we left our newborn son — less than a full month old! — to see the group. (Yes, we got a sitter.) 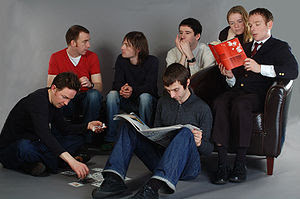 Belle & Sebastian of course, are a band that mixes a gift for melody with instrumental harmonies that recall classic West Coast rock. Their early songs often resembled folk rock or chamber pop; some of their more recent stuff, and their new record, Write About Love, are funkier and more expansive. Either way they are great live, and perhaps the greatest indie pop band since Pavement broke up.

HERE is my piece on the group before their ’06 Bowl show.  It begins this way:

When they started out in the mid-’90s as a project for a college business course, the group of Glaswegian students who called themselves Belle and Sebastian tried to keep things low-key. They named themselves for a French children’s TV show, played gigs in churches and libraries, shunned the media and pressed only 1,000 copies — on vinyl — of their debut album.


I’m sure I’m not the only reader of The Misread City looking forward to the band’s show Sunday night at the Hollywood Palladium.

Here is some information on my book, which Yale University Press published in 2015. (Buy it from Powell's, here.) Some advance praise: With coolness and equanimity, Scott Timberg tells what in less-skilled hands could have been an overwrought horror story: the end of culture as we have known … END_OF_DOCUMENT_TOKEN_TO_BE_REPLACED