THE new television season is starting, and there are a lot of new cop shows. So far the best I’ve seen is the mellow, low-key Terriers, which I reviewed for The Hollywood Reporter last week. Two new shows try a lot harder but achieve less.


Here’s my review of the Hawaii Five-0 reboot, which begins: 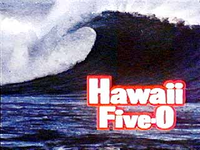 By the time the shooting begins in earnest on “Hawaii Five-0,” about halfway through the pilot, the action comes across well-directed, the camerawork crisp, the pace just right. But it took half an hour to get to this, and it just wasn’t worth it.


And here’s Chase, and its lead:


“Chase” begins with a fit blonde in tight jeans and a sharp leather jacket chasing a criminal through the streets of an unnamed city, brow furrowed in concentration. Pretty soon they’re in a stockyard — this turns out to be Fort Worth — then a rodeo. We’re all over Texas in this hourlong drama from NBC, and by show’s end we’ll be everywhere from Houston’s skyline to a cowboy bar in San Antonio to a border crossing into Mexico.


In short, Chase seemed to me formulaic, but it has potential and the lead is quite good. Hawaii Five-0 — which has some serious talent behind it — only shines during the action scenes. The original is much smarter and cooler. Maybe they’ll both get better.


I’m sure some people will like both shows, and many critics like Five-0 quite a bit. But here’s the thing: We are supposedly in a golden age of television, and shows like Deadwood, The Wire, Sopranos, The Office, etc., have shown how good TV can be. Does every new show have to be as good as those? Of course now. But they’ve gotta be better than this.

Here is some information on my book, which Yale University Press published in 2015. (Buy it from Powell's, here.) Some advance praise: With coolness and equanimity, Scott Timberg tells what in less-skilled hands could have been an overwrought horror story: the end of culture as we have known … END_OF_DOCUMENT_TOKEN_TO_BE_REPLACED