THE Los Angeles-based novelist and recovering Englishman Geoff Nicholson had a smart, counter-intuitive and oddly funny essay in Sunday’s New York Times Book Review about his passion for old Guinness Books of Records and “the joys of outdated information.”
Geoff, whose book The Lost Art of Walking I like very much, was part of a small posse I ran with at Guadalajara’s International Festival of Books a few months ago. The piece brought back the Sheffield native’s slightly skewed and generous way of looking at things. Here’s my Q+A with the man himself. 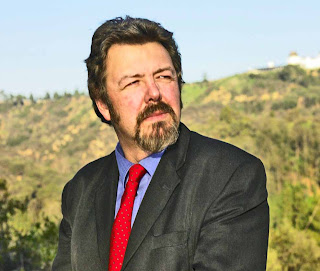 1. Sunday’s piece was quite charming. What fascinates you about outdated or discredited information?
The piece is partly about the joys of old encyclopedias.  I find the whole idea of the encyclopedia, a book or set of books containing everything worth knowing, a fascinating and in many ways a very attractive one.  It suggests stability, eternal truths, the power of facts, etc.  But of course our ideas of what’s worth knowing and what’s worth including in an encyclopedia, even of what’s a “fact,” are changing all the time – in the case of Wikipedia, on a minute by minute basis.
And it seems to me that by being so thoroughly inclusive, Wikipedia is heading towards some Borgesian notion of an encyclopedia that contains everything in the world, and is in some sense the same as the world, like a map on a one to one scale.
I also find it quite instructive, for example, to read in my 1969 World Book Encyclopedia that “Most Angelenos are American—born whites.”  I don’t think we’d put it quite that way now, would we?
2. I was pleased to see a reference to my school-librarian wife and her struggles to get kids to sort out facts from conspiracy theory. What drew you to include this?
Well partly because, my English grammar school didn’t have a full-time school librarian.  Certain teachers volunteered or got forced into it, and I don’t recall they did much more than tell you to sit down, shut up and get on with your reading – which is perhaps not the worst advice to library users.
English grammar schools of that period, or at least mine, were a nightmare.  All male, both teachers and pupils.  Joyless, cold, Philistine, and very strict though not to any obvious end, least of all educational. The idea that somebody might teach us “research skills” would have been a fantasy beyond comprehension.
Even so, our school library was a place I spent a lot of time, a place of refuge in a way.  I still dream about it once in a while, and within the dream I always wonder why I haven’t been back in so long.
3. You run an intriguing blog about food and culture — Psycho-Gourmet. Tell us a little about it.
The subtitle is “ruminations on food, and its relationship with sex, decadence, obsession and the madness of the mouth,” which remains my best stab at describing it.
After I’d written The Lost Art of Walking (which has been, I suppose, my “greatest hit”) I was looking round for another non-fiction subject and food seemed a good one, given my interests and the world’s. So it started as a kind of public notebook to work with some material that might turn into a book.  And it might yet.  I didn’t want it to be restaurant reviews, and I didn’t want to give my mom’s rhubarb pie recipe, so I let it go where it would, and after a while it took on a life of its own and it turned into the quirky, occasionally dark and overripe smorgasbord you see today.
4. So you do and don’t have a new book out?
Well, my latest novel Gravity’s Volkswagen was published in England in the second half of last year, by a small interesting publisher, Harbour Books.   As an Englishman, it’s nice to be published in England. As an American resident, it’s slightly galling that it’s not published here. 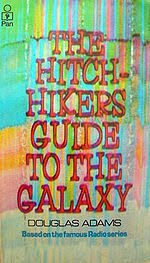 It got some great reviews, but didn’t cause as much of a stir as I’d have liked it to.   It isn’t a mighty tome, but you know, there are no small novels, only small advances.  It struck me as fun and commercial and culty, and potentially cinematic, but I guess the author is never the best judge of these things.
5. You close your essay with a reference to Douglas Adams of The Hitchhiker’s Guide to the Galaxy. You knew him a bit, didn’t you?
Yes.  I knew Douglas fairly well for a very short time, then I’d see him once every 5 years or so and he’d bring me up to date on what he’d been doing, which of course got ever more glamorous.
We were both at Cambridge.  He was only one year older than me (as I now see by checking Wikipedia) but he was a few years ahead in terms of college.  So by the time I was graduating he’d been away to do great things – including write with Graham Chapman of Monty Python – but it had all gone a bit flat – and he’d come back to direct the end of term Footlights show.
I know Footlights has quite a reputation (Peter Cook, John Cleese, Hugh Laurie et al), but at that time – mid 70s – it seemed to me to be just incredibly unhip and old fashioned, but I did do some writing for that show (I believe the words “good career move” may have been invoked), and I saw a lot of Douglas at that time.
After that we largely lost touch, but every once in a while I’d see him walking down the street in London – and I’d ask what he was up to, and first it was writing for Dr Who, and then he had this idea for a SF comedy radio show, which seemed like a real shot in the dark.  And the rest of course is history.
Photo credit: Naomi Harris
—

Here is some information on my book, which Yale University Press published in 2015. (Buy it from Powell's, here.) Some advance praise: With coolness and equanimity, Scott Timberg tells what in less-skilled hands could have been an overwrought horror story: the end of culture as we have known … END_OF_DOCUMENT_TOKEN_TO_BE_REPLACED