Followers of the UK indie scene have been aware or the chimey, reverb-drenched Clientele for several years now. The band’s current tour, which brings them to LA’s Spaceland on Friday and Saturday night, could likely be their last.


Here is my LA Times piece on the band, which goes up Friday. I spoke to lead singer/guitarist Al MacLean about his early schooling in classical guitar, his fondness for LA bands like the Byrds and Love — and his sense that The Clientele may have reached the limits of his vision for them. 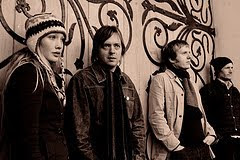 The Clientele are more proof that the West Coast sound of the 1960s is often best mined by English and Scottish groups.


He sees several possibilities for the group, but adds: “What I don’t think we can do is a record like the five we’ve already done.”


Weirdly, the collapse of the band could happen after one of their best records — the hypnotic Bonfires on the Heath — and their most serious tour. Either way, I’ll be at Spaceland Friday. I caught them at the Knitting Factory the last time around, and MacLean’s encore with the guitarist for Great Lakes was like seeing a jam session between Johnny Marr and Chuck Berry. Don’t miss them.

Here is some information on my book, which Yale University Press published in 2015. (Buy it from Powell's, here.) Some advance praise: With coolness and equanimity, Scott Timberg tells what in less-skilled hands could have been an overwrought horror story: the end of culture as we have known … END_OF_DOCUMENT_TOKEN_TO_BE_REPLACED