AMONG the very few things yours truly has in common with Alan Alda is a love of science. (Though my wife tells me he was her first crush, so there may be a joke in here somewhere.)

In any case, it was as pleasure to have a beer with the star of the most successful tv show of all time and discuss the new three-part special he’s hosting on PBS, “The Human Spark.” The show tries to get at what makes us different from the other animals, and what made us that way. HERE is my piece from today’s LATimes.  (The show, which I keep trying not to call “The Human Stain,” starts tonight.)

Alda, who is tall, almost awkwardly lanky and far sharper than I expect to be at 73, was quite amiable and un-actorly, radiating a powerful curiosity even as we pursued little tangents. We discussed the show, of course, his scientist hero Richard Feynman (“a completely human person… he was a very deliberate communicator about his work, it wasn’t an accident”), the workshops he runs for scientists to help describe their work more clearly, and the importance of bringing science to a general audience. “I think their lives will be enriched by it, and science will be enriched by it.” 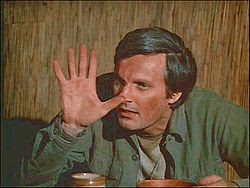 He also discussed — or chose not to discuss — his politics: After his work trying to help pass the ERA, he said, “I came to feel that I’d talked enough about my political views — for about 25 years I haven’t said anything in public about them. I have plenty of opinions, but I keep them to myself.”

My interest in science has been somewhat subdued by my fascination for the arts and culture, but science (esp. physics and astronomy) was my first intellectual love. Needless to say, television shows like “Cosmos” — and “The Human Spark” — are an important way to keep curiosity and knowledge alive in the popular culture. Check it out.

Here is some information on my book, which Yale University Press published in 2015. (Buy it from Powell's, here.) Some advance praise: With coolness and equanimity, Scott Timberg tells what in less-skilled hands could have been an overwrought horror story: the end of culture as we have known … END_OF_DOCUMENT_TOKEN_TO_BE_REPLACED