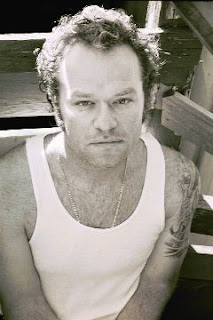 SAN francisco writer stephen elliott is the baudelaire of the mission district.
after reading his new book, “the adderall diaries” — which begins with a possible murder and winds its way to a certain one — i wasnt sure what kind of guy i’d be meeting for my interview at alcove cafe in los feliz. this is a man with numerous drug episodes, childhood years in rough group homes, a heroin OD after a year of stripping, and a career of what i will call “unconventional” sexuality.
but the writer ended up being well-adjusted, an engaging conversationalist, and, like his very fine memoir, without an ounce of either self-pity or self-indulgence.
here is my LATimes story on elliott.
i’ll just say one more word about the book, which is subtitled “a memoir of moods, masochism and murder”: i dont tend to read books about addiction, psychological flameouts, kinky sex, etc — i outgrew my interest in the demimonde (as well as alliteration) in my 20s. but elliott’s memoir is so crafted, so precisely distilled, so damned well written, it comes up with a blend of apollo and dionysus of the sort i have very rarely seen.
i also urge everyone to check out the blog he runs with a gang of other literati, the rumpus. today elliott has a new post about liz phair.
Photo Credit: Lydia Lunch

Here is some information on my book, which Yale University Press published in 2015. (Buy it from Powell's, here.) Some advance praise: With coolness and equanimity, Scott Timberg tells what in less-skilled hands could have been an overwrought horror story: the end of culture as we have known … END_OF_DOCUMENT_TOKEN_TO_BE_REPLACED