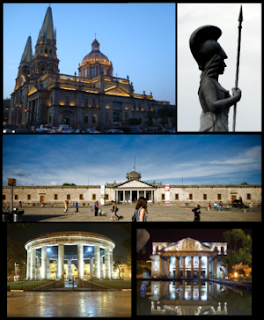 NEXT week I will visit Mexico for the Guadalajara International Book Fair — the biggest event of its kind in the Americas, second in size only to Frankfurt, and this year dedicated to the writing of Los Angeles. I was invited to moderate two panels partly because I co-edited a book on literary LA, and am in the process of renaming this blog for the book: The Misread City. (You can now get to the blog with themisreadcity.com.)

In his Slate review of my book, critic Adam Kirsch suggested that the title could make a good literary quarterly on the city and its culture, and I’ve come to think of this blog as the 21st century equivalent. (Even if a few posts on evil Eastern and British subjects sometimes creep in — LA, of course, welcomes all kinds.)
Anyway I will be running a panel called “The Short Story: LA in a Shot Glass,” with writers Sarah Shun-Lien Bynum, Ana Menendex and Mary Otis, on Tues. Dec. 1 at 630 pm. And a second panel, “They’re From Where? LA Bred Writers Who Live Everywhere But,” with Jane Smiley, Dagoberto Gilb and Paul Beatty, on Dec. 2 at 530 pm. (Please note that I did not name these panels.)
Hope to see some of you there. I will be enjoying the tequila, mariachi, Orozco murals and what I hear is a mellow pace of life there, and trying to catch as many writers and panels as I can myself.
HERE is a piece I wrote on my visit to Mexico City and the colonial silver city Guanajuato.
And wishing everyone a great Thanksgiving, with or without cactus salsa.

Here is some information on my book, which Yale University Press published in 2015. (Buy it from Powell's, here.) Some advance praise: With coolness and equanimity, Scott Timberg tells what in less-skilled hands could have been an overwrought horror story: the end of culture as we have known … END_OF_DOCUMENT_TOKEN_TO_BE_REPLACED