THE Misread City just landed in Guadalajara, where an enormous book festival will pack in 500,000 or so by week’s end.

Tonight I took in a panel on one of the best movies ever made about Los Angeles — “LA Confidential.” Actually, it was just die-hard Angeleno David Kipen interviewing the film’s director, Curtis Hanson, but the conversation was quite revealing.

Hanson talked about his fight with Warner Bros. to cast lesser-known actors in the role of Bud White (which went to Russell Crowe) and Ed Exley (Guy Pearce) and said he almost lost the film because of the casting issue. “But here’s the deal,” he said. “I want to shoot unknown.”

He also described trying to find parts of LA that still existed from the novel’s 1950s setting, to capture the city’s continuity rather than the fragmented memory that’s typically the way old LA is remembered. Hence the use of the Formosa Cafe, near his grandparents’ house, and where he took the actors to talk about their roles.

“I didn’t want the movie to feel like the snapshot of a period that doesn’t exist anymore,” Hanson said.

And he talked about the role of “Chinatown” as a precedent for his film, and how he showed the actors the great Bogart film, “In a Lonely Place,” as well as Billy Wilder’s “The Apartment,” to set the tone.

Even then, by the way, Crowe was known — as the director put it — as “trouble.” 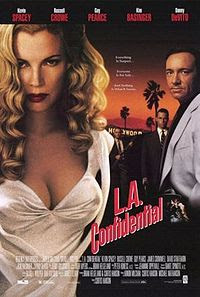 By the way, here is my LATimes piece about films based on Ellroy’s work. All in all, a fascinating discussion about one of the great works of art about the city.

This movie came out a month or so after I moved to town and was a very big deal for me and everybody I knew back then. For me, the movie stands as an important step — as well as Kevin Starr’s histories, most of Ellroy’s work, and books on West Coast jazz and Central Avenue — in which this city that often has amnesia began to recover some of its own past.

Here is some information on my book, which Yale University Press published in 2015. (Buy it from Powell's, here.) Some advance praise: With coolness and equanimity, Scott Timberg tells what in less-skilled hands could have been an overwrought horror story: the end of culture as we have known … END_OF_DOCUMENT_TOKEN_TO_BE_REPLACED