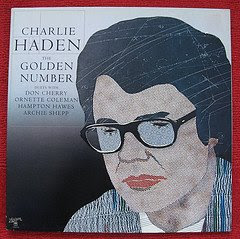 I want to talk for a minute about los angeles’ Haden family: you could define true musical eclecticism as the ability to dig all the branches on this multigenerational family tree. jazzheads know missouri-reared bassist charlie haden for his ability to match the country twang on ornette coleman’s early (and best records) — charlie grounds free jazz stuff that might otherwise be rootless: some of CH’s solo stuff is awesome too: lester bangs once called him “hypnotically inventive.”

the new haden family LP, “rambling boy,” includes the whole gang, which means rachel and petra haden, both of whom made that dog’s “retreat from the sun,” from 97, one of the best sunny-LA records since brian wilson cracked up. (petra’s all-chick-a-capella version of “the who sell out” must be seen to be believed.) tanya is violist for let’s go sailing, another fine LA group, and — fun fact — she and hubbie jack black camped in the hospital virtually next to my wife and me and had their first kid the same week we had ours. (i did not say hi.)
but my favorite member of the haden family these days is Josh, whose band Spain is one of the great lost groups of the 90s. in the dark days before xmas i found my old copy of “she haunts my dreams” — 10 years old this year!! and let’s just say it has actually haunted my dreams. some of what i wrote about in the 90s sounds dated today — this has only gotten better. (here they are at the getty, btw.)
listening to it now, it’s striking how much it pulls from the haden tradition of stripped-down, plainspoken, ozark mtn country music: it’s also a cousin to such wonderfully bittersweet records as the scud mountain boys’ “massachusetts” and the works of LA’s Acetone, Radar Bros, and the career of gene clark, the great, yearning, semi-tragic byrds singer/songwriter. (and now we are back in missouri.) spain’s “spiritual” was covered by johnny cash.
“she haunts my dreams” is also one of the BEST BREAKUP RECORDS of all time. it begins with the simple, heartsick repetition of the song “i’m leaving you,” and just gets deeper and deeper into its theme… anyway, if you think LA music is all about shallow narcissism or studio trickery or hipster bs, check this one out on a dark night of the soul…
WONDERING: what do my distinguished readers consider the other great breakup albums??? i’m thinking richard and linda thompson’s “shoot out the lights,” beulah’s “yoko,” beck’s “sea change”… and anything  by quasi, a great band that actually >is a divorced couple.
Photo credit: Flickr user 9

Here is some information on my book, which Yale University Press published in 2015. (Buy it from Powell's, here.) Some advance praise: With coolness and equanimity, Scott Timberg tells what in less-skilled hands could have been an overwrought horror story: the end of culture as we have known … END_OF_DOCUMENT_TOKEN_TO_BE_REPLACED