It’s commonplace to talk about the need for “audience engagement” – but what does the term actually mean? And how does an arts/cultural organization know if its succeeding?

Perhaps it’s an intentionally amorphous concept – akin to Supreme Court justice Potter Stewart’s famous characterization of the nature of pornography: “I know it when I see it.”

Or perhaps it’s best considered an aspirational notion –  sacred words etched into mission statements and strategic plans that bear homage to the ultimate ideal of connection between art, arts organization and audience.

Might anyone like to argue for the establishment of an objective and quantifiable standard of “audience engagement”? If so, how might your organization behave differently if it held itself accountable to a Richter Scale of audience engagement?

What else could/should be encompassed in the definition “audience engagement”?

Let’s have that discussion!

Today – and for the next few – I’m delighted (and grateful) to offer the insights of several friends and colleagues to whom I’ve asked this specific question:

What is the meaning of the word “engagement”?  And how does an arts organization know if it is succeeding?

Greg Sandow – who writes on the future of classical music

When I worked in pop music, no one ever talked about audience engagement. Why? Of course because they had an engaged audience. So our use of the term is a danger sign, first because we’re saying something’s missing, but more profoundly because the words are so abstract.

I wouldn’t use the term myself. Instead I’d ask:

Answer yes to these questions, and you don’t have to ponder audience engagement. Your audience is engaged.

How to get there is a harder question. But I’d suggest going straight for the things I’ve listed (and others like them we could easily name). Which you do by genuinely loving the art you do, and genuinely loving your audience.

And never using words like “audience engagement” at all.

I really despise the word engagement because it’s become a watered down buzzword that is so unspecific that it can mean anything to anyone. It can mean anything from loudness of the applause, to click rates on an email, to number of posts on Facebook about a performance. One way for an organization to know if it’s successful is to set a very specific and measurable goal within a timeframe ( ie: increasing their email list by 10% in three months) and then celebrate when they achieve it.

Diane Ragsdale – who writes on “what the arts do and why” on her blog, Jumper

Work that is engaging hooks one’s attention and results in an experience that is meaningful. Whether or not a work hooks one’s attention has a lot to do with individual tastes and cultural background and other factors. What happens between getting hooked and finding meaning is also personal and dynamic: first you lean into the work, you come with curiosity, and then a dialogue begins. That dialogue is probably also informed by what others think of the work. At its best, an engaging aesthetic experience feels a lot like flow, according to some researchers.

But this is not the only kind of engagement that arts organizations trade in. Going to an arts event is also an invitation to engage socially—to witness together and then to discuss, debate, enthuse, recall, and reanimate. Sometimes an arts/cultural experience can be meaningful primarily because it is about bringing people together; the art becomes secondary.

How do arts organizations know if they’re succeeding in engaging people? Well, repeat attendance would seem to be a good indicator of some level of engagement. These days, lots of organizations are using surveys to try to capture intrinsic impacts of the arts (including levels of engagement). However, I suspect the best way to know would be to hang around … and observe people in your theater or concert hall or exhibition space … and talk to them.

So, what is YOUR definition of “audience engagement”?  Please post your comments below! 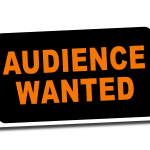 Audiences, they're not just for arts & cultural organizations anymore. My favorite part of any show or concert takes place precisely when the houselights dim and the curtain rises.  It's at that remarkable moment that an assembly of individuals … END_OF_DOCUMENT_TOKEN_TO_BE_REPLACED