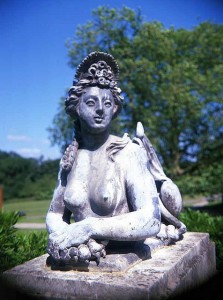 As I considered Walkers’ sugar baby, I wanted to know about sphinx sculpture in general.  I was very surprised to learn the 17-18th century feminization of the sphinx with a subtle dose of sexuality in Europe.  In the ancient times, the memorable sphinx’s are male with a sense of pride and self-importance, not sex.  The great sphinx at Giza Egypt fools the memory as a female with its head dress and  a clean shaven face.  (The archaeologists  believe the great sphinx is MALE and the likely the same pharaoh as the pyramid behind it).

FYI.  Sometimes the sphinx has wings, which then leads to male-female confusion.  Another mythological figure popular in the ancient Greece, medieval Europe and contemporary tattoo / amine, the harpie is a woman’s head on the body of a bird or a winged woman with claw feet.

With the interest in all things ancient, the late Renaissance artists started combining the heads of contemporary women with the lion body.    The sexualization starts with a female head with pretty hair and then add breasts.  The lion body can be shaped more cat-like which links to a 20th century ideas of the sex kitten.  ( Made literal in the 1960s TV “catwoman” on Batman or the 20o4 movie with Haley Berry.)

Walker’s sugar baby exhibits these Renaissance conceptions and sex.  Walker joins Ernst Fuchs in taking the final steps of retaining the “cat-form”, but the body is really 100% human.  Walker’s sphinx is posed capable of sexual intercourse and the curve of back visually raises the butt.  Fuch’s sphinx is like a true cat waiting for penetration.   (Just scratch any cat near the tail and watch the butt rise) 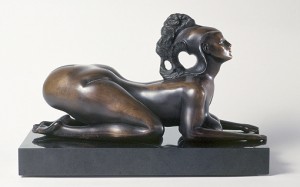 Walker only slighty attempts to de-sexualization the sculpture by recalling the static, proud sphinx of Giza.  Imagine sugar baby with her head tilted back or turned just a little.  Is Walker playing it safe?  Or is de-sexualization of the sexual sphinx mandatory like all the naked and semi-naked women on a hundred years of 19th & 20th architecture?  Without the de-sexualization we cannot contemplate the other messages?  Has she found the right balance?

And finally – the sphinx is covered with sugar to be licked by someone.  Small servant sculptures run about to keep sugar baby sweet for her next encounter.  OK did I go too far?  Ignoring the artist’s purpose with my own male interpretation?  Or without saying so, does Walker want to pull me into the internal dialogue of sexual being and asexual carton nude? 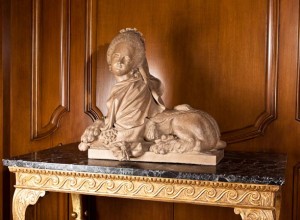 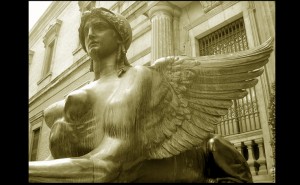 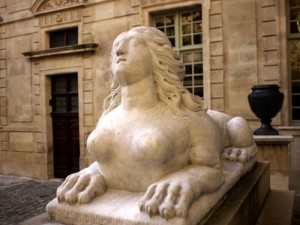 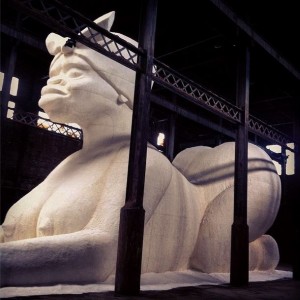