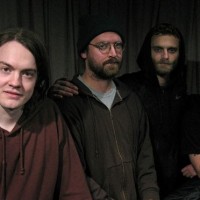 David Garland interviews my son's black metal band Liturgy on Spinning on Air. At the end, all the band members say hello to their moms, over the radio. That's Bernard, second from left. … END_OF_DOCUMENT_TOKEN_TO_BE_REPLACED

Only one student in my theory class today recognized the song "Lydia the Tattooed Lady," and I had to sing it to jog his memory. There is no hope. UPDATE, 3.28.15: Sometimes I feel impelled to resolve to no longer attempt to make jokes in this space, but if I ever come to that point, there will truly be no hope indeed. I can provide more context for the above remark for people who might want it. My students often surprise me with what they know. I would be neither disappointed nor dismayed if they were unfamiliar with Oklahoma or The Music … END_OF_DOCUMENT_TOKEN_TO_BE_REPLACED

In the next month I have five performances of my music coming up, three of them in New York City. On this coming Sunday, March 22, James Bagwell will conduct the Dessoff Choirs in three movements of my Transcendental Sonnets, 7 PM at Peter Norton at Symphony Space in New York. On Wednesday, April 8, students of Dawn Upshaw's will premiere my song cycle Your Staccato Ways (on poems of Karen Schoemer) at Bard College's Bito Auditorium, at 8 PM. That's a preview performance for the real premiere the following Sunday, April 12 at the Morgan … END_OF_DOCUMENT_TOKEN_TO_BE_REPLACED

My subject heading is from Jung. Today we went to our usual Saturday breakfast diner. Our favorite table by the window was being vacated, a young guy still sitting there. Nancy brought to my attention that the book in front of him was Music Downtown. This had never happened to me, and I couldn't resist: "Is that a good book?," I asked, ready to slink away quietly if he replied "Not really." "Yeah, it's really good!" "I wrote it," I replied. "Really?" He looked like I had to be joking. His breakfast partner, who turned out to be his uncle and a … END_OF_DOCUMENT_TOKEN_TO_BE_REPLACED 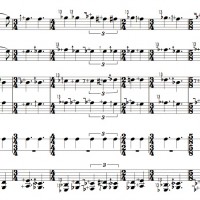 Below is the paper I delivered Saturday at the University of Pittsburgh's microtonality conference. I altered the title from the original "How the 13th Harmonic Saved my Sorry Ass." I think my approach to microtonality is rather unusual, and the conference offered little counter-evidence. I feel like most composers use microtones to add an extra layer of complexity, or just to create an exotic out-of-tuneness, and sometimes (especially Europeans) deploy the harmonic series as little more than a background structuring device. I'm looking for a … END_OF_DOCUMENT_TOKEN_TO_BE_REPLACED