The news is so disgusting these days I try not to follow it. But I have followed the Michael Brown case in Ferguson, MO, closely. Because we are all Michael Brown. UPDATE: Look, before anyone else writes in, I did not mean to say that we are all literally Michael Brown. I, for instance, am Kyle Gann. But in 2004, some of my students peacefully protested the election and were physically harassed by the cops, one girl pushed to the ground and injured for having "stepped over the white line in the street." Some local cops pulled a gay gentleman … END_OF_DOCUMENT_TOKEN_TO_BE_REPLACED 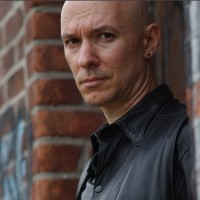 Composer Andrew Violette came to Bard to give a composer's forum last week. I'd followed his music via CDs for years and we'd corresponded, but I'd never met him. He's known for some really long, intense pieces, such as his three-hour-long Seventh Piano Sonata, which I wrote about years ago. He looks less tough in person than he does in his photos, and he spent several years as a Benedictine monk. He wanted to play something live, and since he hadn't written anything for piano since that 2001 sonata, he chose to play half of a book of chorale … END_OF_DOCUMENT_TOKEN_TO_BE_REPLACED

I wrote a symphony. It came to pass in this wise. I visited my friend Robert Carl at Yaddo. He was telling me his plans for his next two symphonies, one of which would be an orchestration of a two-piano piece he had written. I replied that I had a two-piano piece myself, in five movements (Implausible Sketches) that I think of as an unorchestrated symphony. He said I should arrange it for orchestra. I replied, Nah, I wouldn’t do that. The next morning I woke up obsessed with the certainty that I needed to make an orchestral version of … END_OF_DOCUMENT_TOKEN_TO_BE_REPLACED