You are here: Home / Archives for Lyon 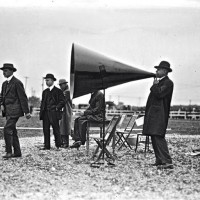 During October, I gave four performances in France (Paris, Lyon, Orléans, Paris) in clubs or alternative, non-classical venues. For each of these shows, the piano was amplified (some engineers prefer the term "reinforced"). Mics were positioned fairly close to the strings of the piano, the sound processed, and piped through a PA system. In one instance, the resulting sound heard by the audience was louder than what the acoustic piano could … END_OF_DOCUMENT_TOKEN_TO_BE_REPLACED

Music is changing. Society's changing. Pianists, and piano music, and piano playing are changing too. That's PianoMorphosis. But we're not only reacting... From the piano -- at the piano, around the piano -- we are agents of change. We affect … END_OF_DOCUMENT_TOKEN_TO_BE_REPLACED