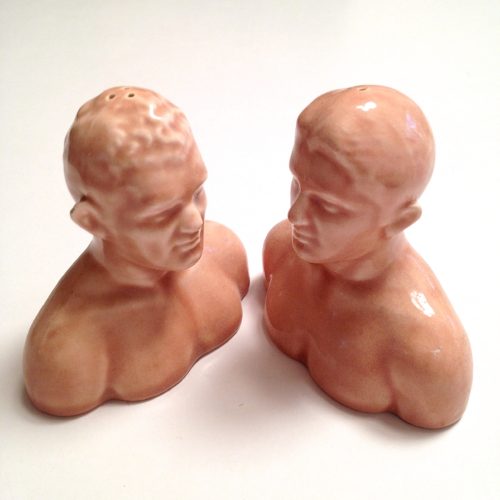 One dating app I’ve used is called SilverDaddies, and my straight friends usually belch a laugh when they hear the name.

“What’s funny?” I ask, and they never have an answer. Silver threads among the gold? Hair turned quite gold from grief? It isn’t Salt-and-Pepper Daddies, although I giggled at age 8 when “salt-and-pepper” was applied to the head of movie heartthrob Jeff Chandler (born Ira Grossel, went to Brooklyn’s Erasmus High) by my mom or dad, can’t remember which. That was the first time I heard language stretch from table to scalp.

“Did you name me after him?”

When I look beneath my chair at East Village’s Neighborhood Barber, there’s no pepper, just doodles of salt. The hungry Midwood boy tucked under my finely pleated skin grabs a memory pretzel to lick all over and roll on the unswept floor.

The everywhere of salt and ground black pepper, at least on this nation’s tables, has become such a Lazy Susan media topic that today’s bright idea, in which I banish both from my eating for a year, loses steam before any fun comes of it.

While waiting for at least one witty conceit in those promising magazine features, we are first reminded that halting salt may be more dangerous than having “too much,” which isn’t bad advice — though not everyone agrees. A coffee-shop stranger once leaned over and chided me for “oversalting” some al dente pea soup, as if she were some doctor of the universe. You can imagine my reply. 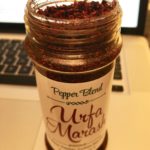 Then we are served an abbreviated S&P history that always involves some Louis from France, and finally we find out the name of the hot new black-pepper replacement, which always involves Amazon Prime. For a while it was “fruity, medium-heat” Aleppo flakes, but perhaps readers were skittish about a cruel, unending war too close to that name, so Aleppo was bumped by the similar but “smoky, raisiny, chocolatey” Maras or Marash pepper, although its home country, Turkey, isn’t exactly Eden.

Flakes can’t get through holes. And no homemaker fills shakers anymore, greasy Liberace shapes butt-plugged with cracked corks. We fill mills, or do a Costco plastic twist.

Restaurants are another story.

I recall when salt was made plural. I’m not good with dates, but the Food Network egg, laid in the early 1990s, flattened the girl in the yellow slicker in no time. Different salts have uses and flavors, but not so long ago I scoffed at such an obvious Keynesian ploy. Finishing salt? Just finish me.

Now, Maldon is my middle name. And gifting travelers know that distant salt can taste better than food.

Salt-and-pepper people sometimes need reminders of everything, although, as stiff fingers type this, I understand again that constancy is fiction. When I lift a diner shaker to consider the shake, what falls out is brain dust, calling up a whispery childhood and tales of Marco Polo. The dull, sandy salt smells of iodine that could prevent goiters or save the best of us after the blast. Decades ago, zealous restaurants asserted the chef’s and not the customer’s primacy by leaving both salt and pepper off their tables. Servers sneered if you asked where the couple went, to what fashion prison they were taken. 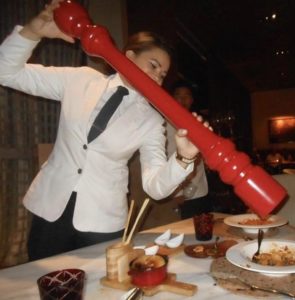 I’m not talking about those delightful knights wielding pepper lances. More than a few times I put my palm under their delivery ends, and it remained unsullied. I tried so hard to remember “I’ll be your server’s” name, to alert her or him to the comic aspect, but never could. And I wasn’t salt-and-pepper yet, which is a melancholy relief.

So what do we want from our food, continuity or novelty, a bridge between leisure and work, a connection to our most-loved cook, or nothing, really nothing? I’m all salt and water, like the dying oceans, and I haven’t any answer that will convince anyone with an appetite, myself included, to keep salt and pepper on the table, or off.

The one peppercorn I crack in my mouth still tastes sweet to me.

The media make a potentially fatal mistake by dividing arts coverage into high and low, old and young, and by trivializing our passionate attraction to things. In Out There I propose that all creative expression has the potential to be both … END_OF_DOCUMENT_TOKEN_TO_BE_REPLACED