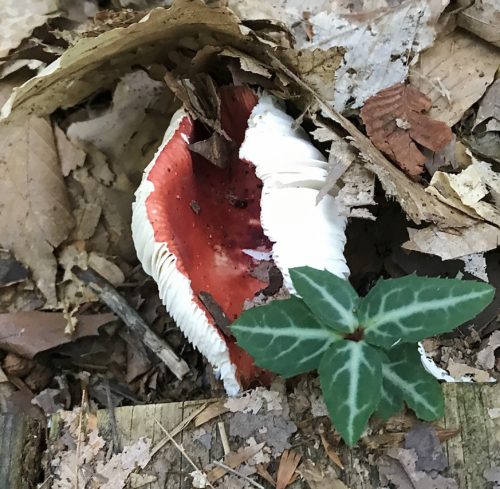 “Once only imagined” is a familiar phrase, no?

What happens to imagination when we walk past the bloody slash on the ground and the other eyes walking with me call to stop. A short time before, my companion and lover said quietly but in amazement, “Look at that big fella!” as an elegant plum form swam under our walking bridge, oblivious as leviathan in its moment. “Snapper” is a name that doesn’t match the majesty of the turtle or its wonderful disinterest in us.

Because we are in Provincetown, an errant finger of Cape Cod, the language of Dickinson, Emerson, Thoreau penetrates whatever I try to say, throwing me between Puritan exhortation and the domestic — still Puritanical — slow explosions of P-towner O’Neill. No matter how fast my partner strides, I barely escape the 17th century in this enveloping beech forest, no less the hundreds of reading and writing years to come.

It must be poisonous. How could a dirt-stuck drag queen not be, at the very least, a caution? I immediately name the alluring specimen “Hester” and click it in the dim light. Our air has a rotting mulch scent, “dark and rich,” that I’d bottle and keep in a New York moment.

Then my scout finds these: 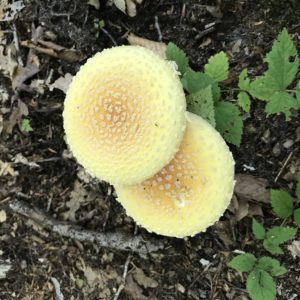 Sickly Gemini, to be sure, never meant to fill a corn tortilla. They resemble something with warmth in their centers, silent radiant heaters.

Sex should never come up at this juncture, but flecks of moist, dangerous matter stick on backs and fronts as we roll like kitchen tools over Colonial American ingredients.

Do you recall your first? Were you afraid, disgusted, concerned in a grownup way that you couldn’t really ascertain why you should eat something like this, a shape without a flavor? Or was mushroom just a pizza choice, a name on a list others wanted that you could scrape away?

For fancier Brooklyn evenings, my mother served large button mushrooms now marketed as portobellos, stuffed with breadcrumbs, garlic, floury canned “Parmesan,” curly parsley — and sometimes tarted up with tinned clams. I admit that I’ve written about these hefty babies before, when in my 20s I prepared dozens at a time for student gatherings or hippie Thanksgivings, trying to conjure and monetize my obedient childhood. Rows of brown soldiers spurting steam on cookie sheets gave me a drill sergeant’s thrill.

Also around that time, a person in a circle passed me a mayonnaise jar with a spoon in it, from which I was told to scoop a clot of cloned psilocybin, chalk-white and not nasty at all. Shroom in a tube, like those new fake potato chips! So I chewed the flesh, swallowed it dry (mayo would have helped) and spent hazy, eucalyptus-scented hours musing how something like this or that could be. The brittle leaves over us made sounds I had never heard before, with or without a breeze.

Then I “learned” about eating mushrooms and cooking them, the way one figures out how to open unexpected gifts. It’s like that with cheeses, too, when you’re new, gaining a sense of self as you sample, later than you’d have liked, a series of alien pleasures. Pleasure and passion often came late to me, but in some ways one is never prepared, on time or not, for a clotted surprise.

So core cookbooks and foreign destinations wrote my mushroom lexicon, first from Europe and then Asia, long established as the ingredient’s favored place. Still, in Provincetown, where those starchy merchants landed first and starved for lack of farming sense before they escaped to Plymouth, what would such desperate scroungers have done as they happened upon our mushroom?

Puritan receipts from either side of the water are scarce, and I can’t see that mushrooms were included in any researched Thanksgiving pottage. So let’s stroll from Massachusetts’ veiled 17th-century forest to a British bog a century later, when extraordinary amateur Richard Bradley, first professor of botany at Cambridge University, wrote 1728’s The Country Housewife, a male-voiced cookery book that spends most of his month of September telling us how to do things with mushrooms. It just so happens that the Summer, 2017 post by British Food in America digs up all sorts of dramatic Grub Street stuff about Bradley, a misnomered “Eighteenth Century Rogue” who, by the author’s lights, could do no wrong.

What Bradley did right (or we shall see if he did) was offer the first recipe for Mushroom Ketchup. A year before, Eliza Smith printed instructions for “English Katchop” that read like those for an anchovy fish sauce, her toddler Worcestershire. I expect that readers have at least one spice-trade ketchup story under their belts and know that Heinz, with all its varieties (“57” was chosen as a number that would be effective, not accurate) is the grinning American brake that stopped ketchup innovation.

Ketchup seems to be a sauce, early of fermented soybeans and later of other pickled vegetables, that’s spiced and maybe sweetened. It’s not to be eaten by itself. Tomato ketchup didn’t show its red face until the beginning of the 19th century, but Bradley’s four, salt-free ingredients result in a soyish liquid that’s meant to lift and rescue the unfortunate sauces, he writes, that routinely immure the otherwise faultless fish and meats served to English “Travellers.”

To make Mushroom Ketchup.
Take the Gills of large Mushrooms, such as are spread quite open, put them into a Skellet of Bell–Metal, or a Vessel of Earthen–Ware glazed, and set them over a gentle Fire till they begin to change into Water; and then frequently stirring them till there is as much Liquor come out of them as can be expected, pressing them often with a Spoon against the side of the Vessel; then strain off the Liquor, and put to every Quart of it about eighty Cloves, if they are fresh and good, or half as many more, if they are dry, or have been kept a long time, and about a Drachm of Mace: add to this about a Pint of strong red Port Wine that has not been adulterated, and boil them all together till you judge that every Quart has lost about a fourth Part or half a Pint; then pass it thro’ a Sieve, and let it stand to cool…

Bradley featured the gills, a word that makes the comic-book child in me think that amphibious fungi with foot-fins lurk beneath the marsh. The remains he called “Parings” and “Parts towards the Roots,” though admitting they could be valuably cooked into “Gravey,” “Loaves” or “Ragous.” Mushrooms then were gathered, seldom cultivated. Their lovers could swoon from flavor, from visions, or from death.

A pound of midsize portobellos costs less than $5 at Costco. So I bought my port, counted cloves and began the opposite process of scraping the gills: to save, not toss. Rereading the recipe, I knew something was amiss, that there wouldn’t be enough liquid to make even a cup, no less a quart, of “Liquor.”

But the cooking became an exercise in mushroom mindfulness during which I learned that when you pull the stem you also begin to peel a thin, damp brown cover off the cap, leaving a fleshy naked knob. You spoon the almost black backsides and find they separate naturally into sections. Ten, 15, 30 of these go into a warm pot.

And my recipe mind was right. It doesn’t work, unless you have a sow’s weight of floppy umbrellas with buckets of muck underneath. The dribble you do press out sizzles and disappears, leaving a scum. 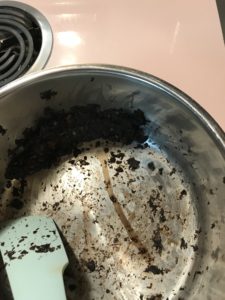 Pour a volume of port equal to the gill mash in the pan and mix. Make sure you run it all around, dissolving the dried streaks. Heat until you smell the spirit coming off, then press your pallet in again and run the sable liquor to a clean side of the pot to decant. Here’s how it looks before you squeeze (left), and the few tablespoons of mushroom ketchup that result (right). Check out the splot: it’s thin. 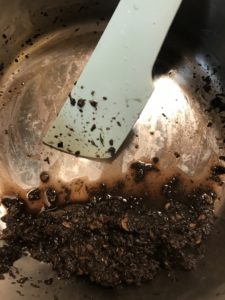 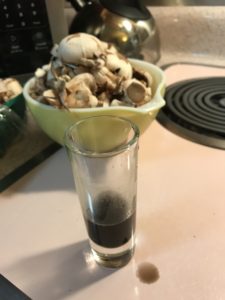 But that mere drop tastes thunderous, fast and dusty, as if a herd of mushrooms were stampeding through my mouth. “Tincture” doesn’t capture its earthen power; perhaps “bitters” does.

I haven’t a clue as to how to use my eccentric elixir in any way that would make its presence known and welcome, except as reminder of what it is like to touch, over and over, the velvet but slightly halting, draggy surface of a mushroom’s dome, its head:

Always cool and beckoning, like what it makes me dream of in my particular forest.

The media make a potentially fatal mistake by dividing arts coverage into high and low, old and young, and by trivializing our passionate attraction to things. In Out There I propose that all creative expression has the potential to be both … END_OF_DOCUMENT_TOKEN_TO_BE_REPLACED