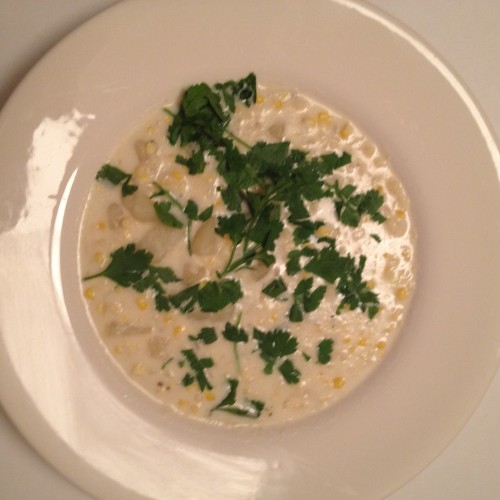 Corn season on the East Coast is ending, sweetness flying off cobs to hole up for the winter and be retrieved — if we are lucky — for our next warm time. Still, there’s an autumn corn-ucopia to be had. The few farm stands that remain open are stocking swollen cauliflowers and glossy leeks, hard parsnips, more and still more carrots. But the late corn in their coolers, tassels limp, allow us a final chowder.

Brooklyn kids from the ’50s rarely saw corn on a cob. Canned corn, even dairy-free “creamed style,” was considered lazy roughage, so modern moms like ours selected “fresh frozen.” Dad, though, saw through Birds Eye and tried to foist his city boyhood onto us by taking the family to Coney Island, not far from where we lived. Each time, brother Les and I thought we were going to Nathan’s for hot dogs and those crinkled fries, but that was just an excuse for Harry to pull us outside to his favorite silver cart.

When the short guy with smudged white cap flipped open a top door, steam would erupt, and with long tongs and a sideshow flourish he’d extract one after another golden ear of corn. Depending upon the vendor, it would be pierced with thin wooden spikes so you could hold it, or handed over in a patterned paper coffin, glistening with what may have been salted butter.

Edythe watched us with wide, Shelley Winters eyes (her hair was always the Clairol color of the month, often Strawberry Blonde), embarrassed at the spectacle of her boys and husband eating something so messy and direct. Maybe she thought the corn was “dirty” from its common hot bath. I can’t recall that Mom, in all her long life, ever ate corn that way.

But Mickey, Bugs, Goofy? Corn on the cob probably made me a writer.

Who Do I Think I Am?

So, trying to find the merest hint, as they say, of who my mother was, I go online and read all the Westfield, New Jersey newspapers from the late 1920s to 1930s, when she lived there — if her assertions that she grew up in Westfield were true. I was looking for evidence that her unnamed father, a man I never imagined as my grandfather, was a hunting-dog trainer, as she had said. Or traces of her piano-playing student self (“I won an award”) in either the public or Catholic high school of an ordinary midsize town. You may have read in my last post that I haven’t a name, first or last, for any of my maternal ancestors.

And when you don’t know your mother’s true last name, she becomes an ancestor, too.

All I had to go on was “Edythe” and its variants, and a belief, confirmed by the 1940 census  — the first record of her life I could find —  that she was born in 1917. Here’s those who graduated from both Jersey high schools, with commencement dates:

Mom said she was raised Catholic and converted to Judaism to marry Harry, so “Rothstein” wouldn’t fly. So many Ediths! I have one friend now with that same name, which stretches easily into the past: Edith, meet Gwendolyn, Hortense, Mabel. Of course, we can’t help but wonder where those Westfield Ediths flew and settled. Many must be long gone, Ediths on gravestones.

Names always evoke stories, no matter how fanciful, so I began to sketch a teenage life for Edith A. Della Serra:

The ‘A’ is for ‘Aida,’ a part her Neapolitan nonna  had sung three decades before in that city’s opera house, but one that young Edith would never dare attempt, because she stuttered — in Italian but, oddly, not in her halting English. Yet she knew and silently mouthed every Verdi note because of the 19 double-sided 78s her family treasured and played on Sundays, with the grand Dusolina Giannini singing her, Edith Aida’s, role.

The term “blind alley” applies here, because after searching for genealogical details about each Westfield high-school Edith/Edythe during the years that made sense, no mother materialized. Could it be Mom didn’t graduate? Perhaps she was shy, took to corners and avoided all record of adolescent existence. When I was older, Edythe told me a few times that her unnamed mother “ran away” with a man; the adulterers lived together in the same town, Westfield, which created a scandal. Because of that, she said, her mother’s mother (also no name) had the task of raising her and her two older brothers. She said this in an offhand way. In my mother’s past, both my unnamed, unmet uncles were musicians. One got work in Hollywood, and the other stayed nearby but “married a Nazi,” so she stopped speaking to him. I think she thought I’d like that.

Sure, got work in Hollywood, a male Esther Blodgett. “I don’t know where they are, and I don’t care.”

If I shut my eyes, I can see two or three or her creased, faded snapshots: one of a frowning, formidable woman in a dark cloche, leaning on the hood of a coupe in Bonnie and Clyde style. Another was an older man, out of focus, crouching in front of hand-tinted hydrangeas. But I can’t be sure. Weinstein family photos — even most of my own, young father — vanished 50 years ago.

I’ll probably never know why Edythe couldn’t tell the truth about her birth, her childhood, her self. Did she struggle to escape her own Great Depression? Was there something unspeakable she had to bury? I’m afraid the reasons for her many silences died with her.

“Did your grandma teach you to cook any French dishes?” I once asked Mom in our Brooklyn kitchen as the just-invented TV dinners went into the oven. (She had told us her parents came from France.)

“What did you eat, what did she cook for you?”

She didn’t remember or care to remember, saying only that her grandmother, always in a starched white apron, was “strict.”

In another of her rare reminiscence moments, Edythe told Les and me that an aunt of hers had died because a spark jumped from a fireplace and ignited the trim of her dress, which instantly spread and enveloped her in flames. Someone tried to roll her in a blanket, but it was too late.

Edythe recounted the awful story in detail, as if she had been there, but the accident happened, she went on, before she was born. Who told her? Mom’s past rarely surfaced, but when it did, it wobbled.

I have nothing like this chowder in my past, yet when I taste it, it seems familiar, as if it had been spooned to me in a highchair. Would it surprise you to know that I feel the same way about the dals and stews of India, as if I had been raised on them?

An emotional palate doesn’t mirror genes or genealogy. It has a family tree of its own.

Quantities are flexible, because ears of corn differ in size and so does love of butter or potato. A simple logic of assembly makes the dish.

What kind of potato should you use? The most local and plentiful, the ones that look the best. Russets will fall apart and thicken our soup more than Yukon Golds, and you may like that, but any spud will add its character in a signature way.

What kind of corn? Supermarket ears are almost always old, so scout for farmers markets or stands. 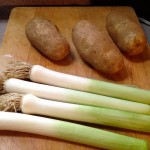 The trick is in the broth.

Shuck the ears and, unless you have one of those fancy stripping gadgets, slice the kernels off with a sharp knife into a bowl, making sure to catch any dribbling juice. Important: Save the cobs.

If you’re using leeks, cut the roots and green tops off and reserve.

Measure 1 cup water for each ear and pour into a large — at least 6-quart — soup pot or kettle. Snap naked cobs in half (kind of sexy) and add to pot. 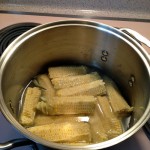 Add leek tops and some salt, stir, and heat on high until boiling. Reduce heat and simmer for 15 minutes or more. That’s your broth. 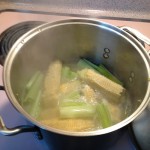 Remove hot cobs and wilted leeks with tongs and dispose. Strain remaining broth (be careful) into a large bowl or Pyrex measuring cup and reserve.

Rinse and dry that warm pot and heat butter at medium until it bubbles or oil till it’s hot and ready. Add chopped potatoes, leeks/onions, salt and pepper, then stir and cook till your allium melts. The usual aroma may evoke appreciation. 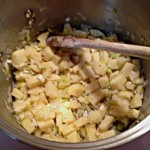 Add the warm cob-broth, stir, bring to a boil, then reduce heat and simmer until potatoes taste done. You can break up a few pieces to thicken the chowder. Stir. Add water if the potato mixture is not just covered. 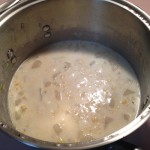 Now add the corn and cook at low to medium heat until the tough late-season kernels are tender; should be 5 to 10 minutes. Their sweetness will seem to increase, which is odd.

Slowly add milk and/or cream, heating all the while, until you reach the “soup or stew” balance you like. Keep it hot, but don’t boil, because some folks think a corn chowder, any chowder, can overcook.

Many things improve with warmth and age, at least until tomorrow, so I am not so sure of that.

The media make a potentially fatal mistake by dividing arts coverage into high and low, old and young, and by trivializing our passionate attraction to things. In Out There I propose that all creative expression has the potential to be both … END_OF_DOCUMENT_TOKEN_TO_BE_REPLACED