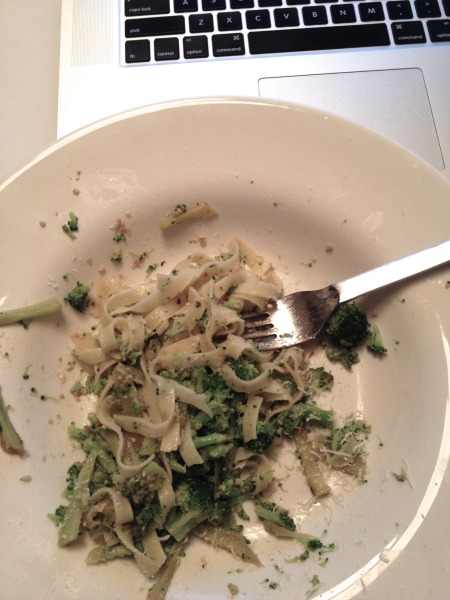 Writers, even on Facebook and Twitter, are solipsistic. Writers burrow, like moles or voles, in whatever dirt we find ourselves to make some kind of momentary home.

Because cooking is a form of writing, as eating is a form of reading, I’ve always felt most comfortable and free when I’m cooking in a tunnel, for myself. Solo menu choices narrow to a slim juggle (no whole turkey tonight), but the ego of one’s appetite has the final say.

Too bad there’s no microwavable answer. Just as some of us don’t know what we think until we write it, I don’t know what I’m hungry for until I cook it. Yet I try to sort through what I’m afraid I must call the kitchen of my brain to find some direction.

Tonight, the ordinary dish you see above did exactly what good writing does: created an appetite for itself. So here’s the paradox. Can my personal accidental dinner transfer to a foreign receptor, to you? I won’t labor the answer, but will make an offering, one without a list of ingredients, but instead a short report of the easy manipulations that resulted in an almost inebriate pleasure.

I already had decent broccoli. An open tin of anchovies in olive oil, it said from Morocco. A shadowy package of “artisan” tagliatelle from Calabria.

Got out the three-quart, low-side saucepan and on low to medium heat melted a thumb of sweet butter and equal amount of olive oil (odd bottle from Arezzo), enough to cover the bottom the pan. Tilted them into each other: they meld much more naturally than you’d think. Cut about a quarter of the florets from the broccoli stalk into manageable pieces, enough for me only, then knifed off their little stalks and roughly julienned them. The slivers went first into the hot butter and oil. A heavy toss of red-pepper flakes next, although I knew I should be using some sort of real pepper. Chopped the three orphan anchovy filets: added, sizzling. Not a beckoning aroma. I had already skinned half a garlic bulb and minced the cloves (I’m good at mincing), so the garlic last, all on the same moderate heat. Stir and stir again.

Do this as your pot of water is boiling. Watch the garlic, though I hoped it would turn just past yellow, for a touch of that bitterness everyone says to avoid. Take the saucepan off the burner when it darkens.

A handful of pasta goes into the roiling water, then a twist of salt, and after five minutes, so does the waiting broccoli. In another five minutes, with the vegetable still green, pour the batch into a colander and, when drained, quickly tip it, dripping wet, into the warm saucepan. Scrape some Parmesan over the mass and stir carefully for a full minute, bringing up the bottom, until you smell your supper. If you have dried bread crumbs, add and stir one last time.

That’s not my recipe, of course, because it’s not a recipe at all, merely a series of logical, alchemical steps.

I tried the food before the wine — a cheap sauvignon blanc, already in the fridge. Needed salt. Then tasting again at the quiet table, as a dull New York sky darkened, I could see, literally see, the light over Firenze, gray going to bright lapis blue after sudden rain. [contextly_auto_sidebar id=”U0lk45lKJsHwizGb2zVc2namV5SAIOU4″]

The media make a potentially fatal mistake by dividing arts coverage into high and low, old and young, and by trivializing our passionate attraction to things. In Out There I propose that all creative expression has the potential to be both … END_OF_DOCUMENT_TOKEN_TO_BE_REPLACED