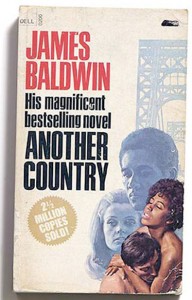 This would normally be where a guy like me concludes by showing how I resolved my dirt issues, or at least negotiated a balance between cleaning and living free. But that would be a kind of cleaning up, wouldn’t it.

At the same time, because pornography has entered the building, the dirty-string gatherer is tempted to state that he can literally visualize dark-blue passages in his introduction to printed dirt: James Baldwin’s  Another Country, which was passed around in high school till it disappeared.

“Did he fuck you in the ass, did he make you suck his cock?”

A furious husband was breaking up with his wife because she cheated … with a homosexual, a faggot. I was 14, burning, and I bet I got that right, word for word.

To continue in the porn vein, I scoured textbook Freud for penises and explanations. Read de Sade on a train I took to see my first boyfriend, a lying creep. Wrote an essay that’s now in some book about how pornography educates queer men because we can’t get useful details anywhere else. Got out of writing a whole year of numbing graduate-school papers by giving a bunch of lectures on the history of pornography – they weren’t bad, I must admit, with plenty of details about the Vatican’s giant collection of smut and a meticulous outline of Victorian fetishes. The pissy smell of library archives became my personal scent.

One more thing. In my emotional lexicon, dirt has never withered to a concept, a symbol, a metaphor. It’s always been utterly real, beneath or around me, whether I look down at my feet or up at the sky. For that, who could be anything but grateful.

The media make a potentially fatal mistake by dividing arts coverage into high and low, old and young, and by trivializing our passionate attraction to things. In Out There I propose that all creative expression has the potential to be both … END_OF_DOCUMENT_TOKEN_TO_BE_REPLACED