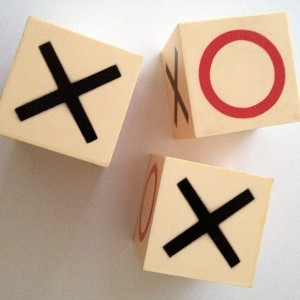 When I was a youngster, I thought writing blocks were cubes with different letters that I could arrange into words. I’d do it horizontally, left to right, just as I had learned to print letters in penmanship class, or I’d do it by piling the blocks into towers and read the result from top to bottom. In that case, I’d have to lift the whole pile each time I added a letter, and if the word were too long it would topple.

To prevent that, I tried to fashion my words from the bottom up, but I’d be stumped. What’s “DISNEYLAND” backwards? Even spelling straight wasn’t easy, so reversing the order was next to impossible. Sometimes, I couldn’t figure out how to spell a particular word like button — buttin, buttan, buton? — in any direction.

Yet I preferred to spell vertical because I loved to recite the accidental nonsense that formed on the tower’s other three sides or, best of all, to erect “dirty” words for my brother and I to giggle at and knock down.

But all that stopped (the crash you hear is a giant name being dropped) when Stanley Kubrick’s parents taught me to play Scrabble. The Kubricks tried to teach little Jeff Scrabble, as they probably taught little Stanley years before.

I was 6, maybe 7, and the Kubricks were memorably generous and sweet, but these new writing blocks were tiny and flat — and at my first lesson I simply could not think of a single word that used the letter X. Mr. K, who was a doctor, got up, walked around to look at my rack, picked out an A, then an E, and put them on either side. He didn’t say anything, but general disappointment was obvious.

You won’t be surprised that soon after my initiation to the word-game called Humility, a new writing block entered my life. At the time, smart adults and early TV shows spoke about this block with a confidence and assurance that it existed, pairing it with sweating palms, neurosis (remember that?) and the image of a man, always a man, staring at a blank page. Much later, of course, we all stared at a blank screen, bright white except for the constantly winking cursor that mocked our dead fingers.

Shy of a year ago, in the middle of writing a piece about my lifelong fascination with pasta fagioli (in vintage Brooklynese, pasta fazool), I stopped. Stopped quiet, stopped cold, stopped completely. Did I “run out of gas,” as my dad the car dealer would have said? Every writing-block cliché I could summon did a brief pirouette in front of me, auditioning as my excuse: “You’re tired.” “You’ve lost your mojo.” “Something primal is keeping you from going on.” (I laughed at that one.) “You’re afraid of failing!” “Written too much, no new ideas.” And that, which sounded convincing, led to the twirl that won the part, a veritable double cliché: “Your well is dry.”

Well, well. Nothing novel to say. Yet I Tweet like a baby bird and treat all of Facebook as my confidant. With one martini, I’m noisy and unstoppable at parties.

So this is what I decided to say to myself and to my wonderful upper- and lower-case friends: “With just a few breaks, I’ve written for a living and for pleasure every week for almost four decades. It’s turned my hair disco silver. I want to see what it feels like to stop.”

Would my bright locks darken? I anticipated guilt and for the first few months wasn’t disappointed, but that heritage emotion evaporated, replaced by the sentimental correlative to a sunrise, or a smile. No deadline today! Not even one self-imposed.

Then something happened: cooking became my writing. Not every week, but every day. The sooty oven, the pink electric stove, the three-bear outdoor Webers imposed a new set of deadlines, and my patient, hungry husband, a writer himself, became my food editor, one I’d rather not fail.

Yet, in both cooking and writing, failure is inevitable.

The media make a potentially fatal mistake by dividing arts coverage into high and low, old and young, and by trivializing our passionate attraction to things. In Out There I propose that all creative expression has the potential to be both … END_OF_DOCUMENT_TOKEN_TO_BE_REPLACED