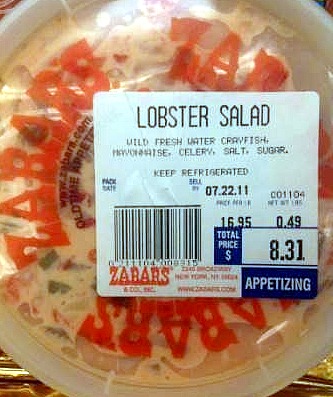 Oh, the sadness in Friday’s New York Times. Hundreds if not thousands of Upper West Siders have been scooped, scooped! by one Doug MacCash, art critic at the Times-Picayune in balmy New Orleans. Doug, who’s a charming and sensible guy, usually gets embroiled in what-price-graffiti tussles or wins team Pulitzers for rowing the newsroom skiff with his managing editor on the night Katrina visited. But this time, he was visiting New York with his family and must have hopped on the wrong subway, because he found himself on the Upper West Side — where no art critic goes unless bribed.

A bagel from Zabar’s sounds good. Here’s how Doug puts it:

The tiny tubs of lobster salad in the refrigerator case caught my eye. Lobster salad on a bagel; why not? It was delicious, but the pink/orange tails seemed small and somehow familiar.

Yes, of course they were familiar: they were crayfish — or crawfish. That’s what’s on the list of ingredients, fresh-water and free-range (well, wild). Even Doug’s ostensibly definitive paper swings both ways on the spelling: “cray” in his copy, “craw” in his hed. I would love to be a crustacean on the wall of those fractious copy-desk meetings. Doug, who is much amused by the ruckus, just told me that “mudbugs” is the only decent compromise.

He is also looking for the imaginative wit who styled the scandal “Lobstergate.”

So, as some of you probably know, my city’s paper of record picked up the story and strolled with it. Metro reporter James Barron got 83-year-old president and co-owner Saul Zabar to quote from Wikipedia, impeccable souce for all things edible, about why crawfish or crayfish or crawdads or mudbugs are actually lobsters because they resemble or are “related to” them.

As one of many shocked, shocked! commentators wrote in the Times, that would be “like making chicken salad with sparrow.” (Take a subway to Bologna for that.) Those Comments are so delightful that I am going to do something I have never done before and link to them here, providing Out There readers with a genuine Seinfeld flashback. You can troll for your own droll favorites and save me the trouble.

Now, I am no fan of Zabar’s. I do not care if those in the know remember George the “Sturgeon General” or go on about sliced, smoked this or that.  Lox at its best is a memory with cream cheese.

Don’t think I am immune to such nostalgia, and feel free to invite me over any Sunday. But I am skeptical of any super nova that’s not in the nearby Museum of Natural History’s planetarium.

One could say that Zabar’s has committed fraud, fraud that hundreds if not thousands of Upper West Siders, even those who do not write for the Times, have overlooked. Yes, one could say that. The postmodern solution would have been to employ quotes: “Lobster” Salad.

Do you wonder, as I do, if those mudbugs are indeed wild or farmed in a place like Chile or China? Maybe poor Saul has a Wiki-definition of “wild” that would prevent him from eating more free-range crow.

The Trouble With Labels

Doug didn’t need a label to tell him what he was eating, which makes him my kind of critic. But labels always lead to trouble, as poor Bert and Ernie have found out. The same day we lost our faith in Zabar’s, Bert and Ernie read in the Times that they couldn’t marry, even though they are New York residents. And why? Labels. They each have a label, a label that says “puppet.” 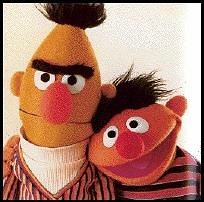 Bert and Ernie are Upper West Siders, and most of their neighbors have seen them walking on Columbus, never holding hands, but close together in that subtle way that tells anyone with any brains that they are, well, intimates.

No one recalls seeing them in Zabar’s.

Imagine their red-faced consternation when they spotted their names in a headline, and then saw a statement from the Sesame Workshop about them!

Bert and Ernie are best friends. They were created to teach preschoolers that people can be good friends with those who are very different from themselves.

Even though they are identified as male characters and possess many human traits and characteristics (as most Sesame Street Muppets™ do), they remain puppets, and do not have a sexual orientation.

Oh my lord. They could hardly speak. Of course we’re puppets, they thought. What else would we be?

They often thought the same thing and finished each other’s sentences, which is something their closest friends loved about them.

We don’t have an “orientation.”

They grabbed hands and, holding back tears, quickly returned to their one-bedroom apartment on 110th Street, which gets beautiful afternoon light.

“Maybe Miss Piggy will have some advice,” Bert said to Ernie. They were meeting her for dinner, but downtown. After all these years, they never found a restaurant in their neighborhood that was any good.

“Don’t worry, sweetheart,” Ernie said. “It’ll be forgotten tomorrow. And nobody we really like reads the Times.”

The media make a potentially fatal mistake by dividing arts coverage into high and low, old and young, and by trivializing our passionate attraction to things. In Out There I propose that all creative expression has the potential to be both … END_OF_DOCUMENT_TOKEN_TO_BE_REPLACED