You are here: Home / Archives for Esperanza Spalding 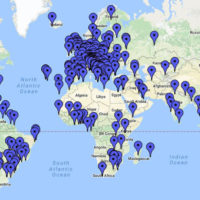 April 30 -- yesterday -- was celebrated as the sixth annual International Jazz Day with a global webcast from Havana, hosted by Will Smith, headlined by pianist Herbie Hancock and including a couple of dozen top notch musicians from the U.S., Russia, Cameroon, France and Korea as well as Cuba. Did you know? Advance publicity and followup coverage has been but a dot on the attention focused on IJD last year, when President Barack Obama hosted a splendiferous Jazz Day in the White House. Considering the leader of the regime replacing Obama's … END_OF_DOCUMENT_TOKEN_TO_BE_REPLACED

Best New Artist of the Year, according to the Grammys, is Esperanza Spalding, a 26-year-old jazz bassist and singer whose most recent album is titled Chamber Music Society. What!? or should the question be, How?! Full congrats, she's as bright a rising star as has emerged from jazz by virtue of her charm and chops since 2006 -- when Junjo, her first CD, was released. She beat out some kid named Justin Bieber, whose fans are enraged. … END_OF_DOCUMENT_TOKEN_TO_BE_REPLACED

Women are making future jazz history -- despite seldom showing up in top high school band competitions. My new column in City Arts - New York's Review of Culture, has local names and immediate dates; jazz gender parity is a slow movement but my bet is it's irreversible. … END_OF_DOCUMENT_TOKEN_TO_BE_REPLACED

Biographer of H L. Mencken and (coming soon) Louis Armstrong, ArtsJournal blogger and scribe for the Wall Street Journal Terry Teachout has raised a fuss by pointing to the National Endowment for the Arts' study citing declines in jazz audiences from 2002 to 2008 (and indeed from 1982 to 2008). That this data was released in June and been reported on earlier, elsewhere, (like at Jazz.com by editor Ted Gioia) without getting much attention suggests either the broad reach and high profile of Murdock-owned media or it's August and a writer getting … END_OF_DOCUMENT_TOKEN_TO_BE_REPLACED

What if there's more to jazz than you suppose? What if jazz demolishes suppositions and breaks all bounds? What if jazz - and the jazz beyond, behind, under and around jazz - could enrich your life? What if jazz is the subtle, insightful, stylish, … END_OF_DOCUMENT_TOKEN_TO_BE_REPLACED

Reviewing a sleeping giant, ESP Disks before its early '00s revival  Howard Mandel c 1997, published in issue 157, The Wire It was a time before psychedelics. Following the seismic cultural disruptions of the mid '50s, rock 'n' roll had hit a … END_OF_DOCUMENT_TOKEN_TO_BE_REPLACED

[contextly_auto_sidebar id="IFeXJPobvykRyuU4dU68FilRPv0EE8oC"] This is a complete version of the feature on pianist Matthew Shipp I wrote for The Wire, published in February, 1998 Is this the face of New York's jazz avant now? Pianist Matt … END_OF_DOCUMENT_TOKEN_TO_BE_REPLACED

A 1990 interview with drummer Rashied Ali, about his relationship with John Coltrane. … END_OF_DOCUMENT_TOKEN_TO_BE_REPLACED

Miles Davis intended On The Corner to be a personal statement, an esthetic breakthrough and a social provocation upon its release in fall of 1972. He could hardly have been more successful: the album was all that, though it has taken decades for its … END_OF_DOCUMENT_TOKEN_TO_BE_REPLACED