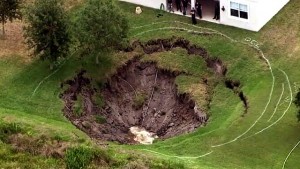 What happens when an artist uses a phenomena that is just vaguely known or not really understood by the public.  For me and others,  a sinkhole exists as a unclear image in my mind as a big hole that houses can fall into.  Why it happens – I don’t know.   Why it happens in Florida (where I live) seems tied to “goofy Florida” or just another piece of human stupidity in the sunshine state.   I blame the homeowner for not knowing about the big hole. 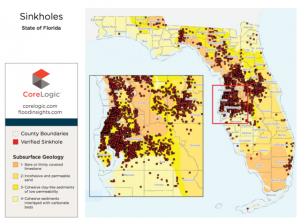 Our lack of knowledge about sinkholes is very simple to explain.   Sinkholes are just not very exciting as national and international news.  Sinkholes have no ACTION like a hurricane, fire, tornado, tidal wave, earthquake, volcano, flood, etc.  Very, very few people die in sinkholes.   Only one (very unsuccessful) disaster movie “On Hostile Ground” was ever made.  Sinkholes strike one at time, and the “disaster” is limited to one person’s property.    Except for Florida, sinkholes occur in rural areas outside the major media markets – Texas, Alabama, Missouri, Kentucky, Tennessee and Pennsylvania.  Even in Florida, a sinkhole story makes the evening new once and is forgotten.  The number of new sinkholes is unknown, but on average 17 insurance claims are filed each day in Florida for 6,000 per year. 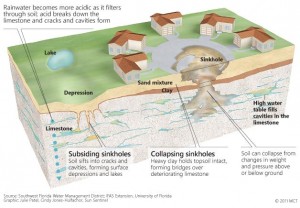 So what is a sinkhole and why Florida?  According to geologist Clint Kromhout, “The bulk of Florida’s peninsula is made up carbonate rock (limestone and dolostone) overlain by variable thicknesses and mixtures of sand and clay (i.e., overburden). Carbonate rocks store and transmit groundwater. Through a slow chemical process these carbonate rocks may dissolve, resulting in karst terrain (topography). Karst terrains are characterized by sinkholes, caves (wet and dry), springs, disappearing/reappearing streams, and other land surface depressions all of which are commonly found throughout Florida.”

Basically, below a layer of sand and clay on the surface, the limestone dissolves due to acids in the rain or ground water.  After the limestone is gone and the sand & clay is saturated with water in a rain storm, the sand and clay falls into the cavern.  Older sinkholes are now the lovely surface lakes that dot central Florida.

At Socrates Sculpture Park in NYC this summer, artist Heide Fasnacht installed a 3D drawing of a sinkhole swallowing an idealized hip roof suburban house.  Through email exchange, Fasnacht graciously sent the specific photograph upon which she based the project. 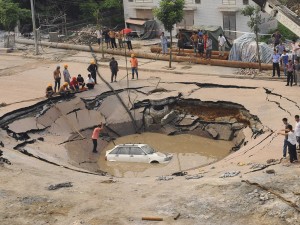 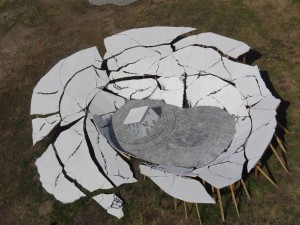 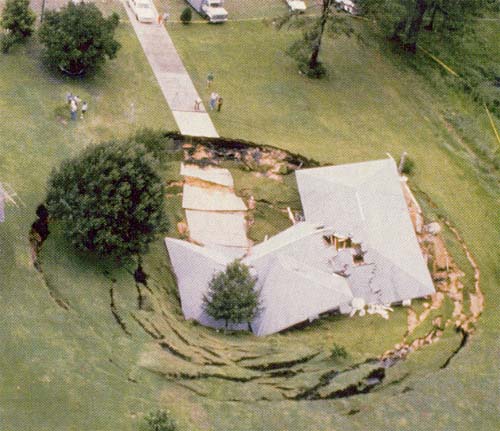 Fasnacht could have used this image.

Fasnacht did not use the house photographs because in real sinkholes the house crumbles apart.  Fasnacht wants the house (or home) to float in purgatory – neither dead or alive.  A crumbled house merges with sod or asphalt into one geological event without a protagonist.  There is no difference of human and non-human.  Just physical matter. 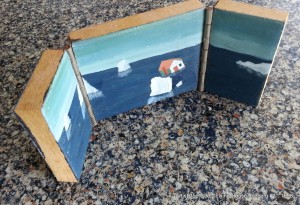 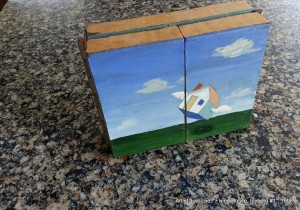 In 1998, Joel Lee gave me one of his small artworks – “Flying House, Iceberg #1”.  Similar to Fasnacht, Lee has personified the house.. He provides two choices as a directed happy spirit flying in the sun or a floundering spirit doomed among the icebergs.  For several years based on my feelings or hoped for feelings, I would expose the elevated or deflated spirit.

In “Suspect Terrain”, Fasnacht uses the personified cartoon house to illustrate the pun – “sinking into a depression”.  Emotionally we sink with the house and with little hope as the normal safe zone – the terrain or land or earth –  also cracks and falls into the hidden hollows deep in the ground.

Fasnacht distances us from the emotional event by drawing or printing the sculpture with dot patterns in black & white to mimic a old enlarge xerox copy or newspaper photo.  No drama through color or expressionistic lines.  She raises the cracking land to a height of the standard exhibit at the science center, therefore continuing the push toward rational contemplation. 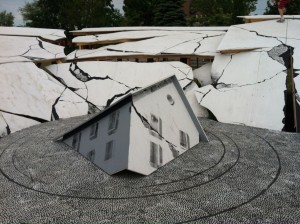 Fasnacht’s sculpture correctly diagrams the confused American attitude toward depression.  We know it is an emotional disease, but we look toward rational solutions of neutral pathways enhanced by drugs or cognitive therapies with step by step processes to mitigate disruptive mental habits.   She correctly titles her work “Suspect Terrain”.

CLARIFICATION:  This interpretation of the sculpture is only my imagination working from south Florida.  Heide Fasnacht herself has not written any such ideas as far as I know. 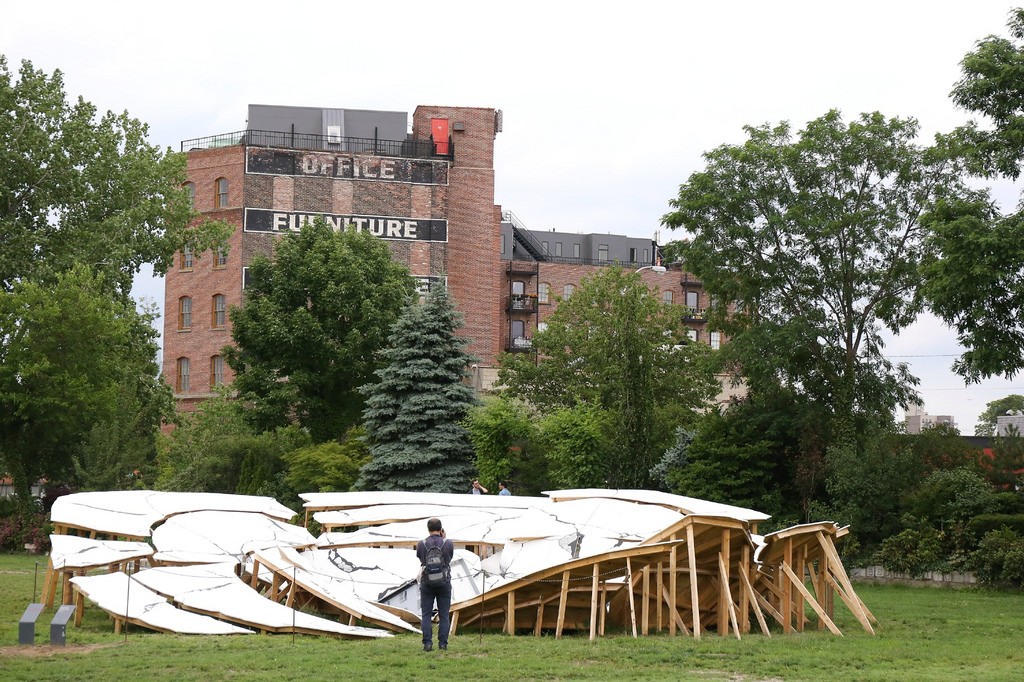 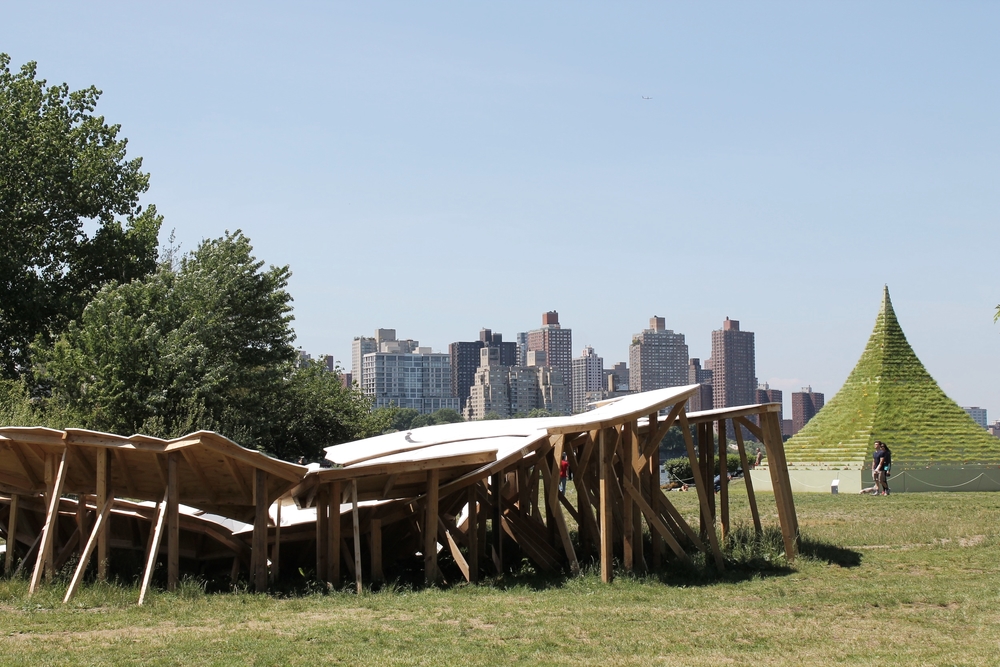