EVERYONE in PUBLIC ART and PUBLIC SPACE UNIVERSE…….. 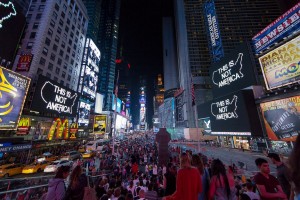 Over the last couple of weeks the Mayor and Police Commissioner of NYC have proposed to return the new Times Square pedestrian space to the cars.  REASON:  Topless women with painted breasts and few aggressive cartoon characters.  Yes these “street entertainers” working for tips can be annoying for a second,  but it is Times Square !!   If NYC would declare the plaza as a “park”,  then regulations could be enforced.  As a “street”, the police can only stop activities for endangering the public, generally for blocking the flow of pedestrians.  If the plazas are eliminated, then the police can easily remove the “entertainers” from the sidewalks which they do through out NYC.  The plazas have too much space. 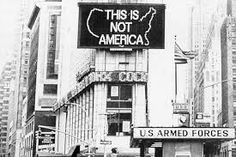 Alfredo Jaar, This is not America, 1980s

Personally, as the 2008-2011 Public Art Manager for the Times Square Alliance, I think this is a great opportunity to solve the legal issues pedestrian Broadway.  Either “park-like” regulations could be established for the pedestrian spaces in the roadways throughout NYC — or  — some, like Times Square, could become parks.  The problem with both ideas is that the wide-open, anything can happen feeling of Times Square may be lost.  This “feeling” is the only thing left of the old Times Square and old New York that arts community baby boomers miss so desperately.  As a NYC resident from 1979-86  ( age 23-30 ), I missed it too much.

In 2010, I had lunch at the “Polish Tea Room” (Edison Hotel) with City College’s leftist philosopher, Marshall Berman.  Berman LOVED Times Square despite and because of its commercialism.  I asked him what the art program should do.  He replied “Keep it a little dirty.”  Is the  Police Commissioner and Mayor listening? 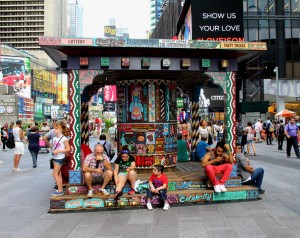 “Times Square is the heart and crossroads of our city and the world for tourists and New Yorkers alike. Since Broadway first closed in 2009, Times Square has become less dangerous and more enjoyable. Retail has thrived and pedestrian injuries have been reduced by 35%—think Vision Zero. The new $27 million plazas have helped commuters get onto subways faster and made it easier for workers to get to their jobs. Plazas give tourists a place to rest, theatergoers a place to buy tickets and wait for shows, and office workers a place to eat lunch or watch the world go by.

“NYC Police Commissioner Bratton and Mayor de Blasio want to rip up the pedestrian plazas. We can’t let that happen.

“Aggressive street performers and ‘desnudas’ are an enforcement problem. They aren’t a plaza problem. Ripping up the $27 million plazas won’t stop the behavior; it will simply move it onto already crowded sidewalks and into traffic. 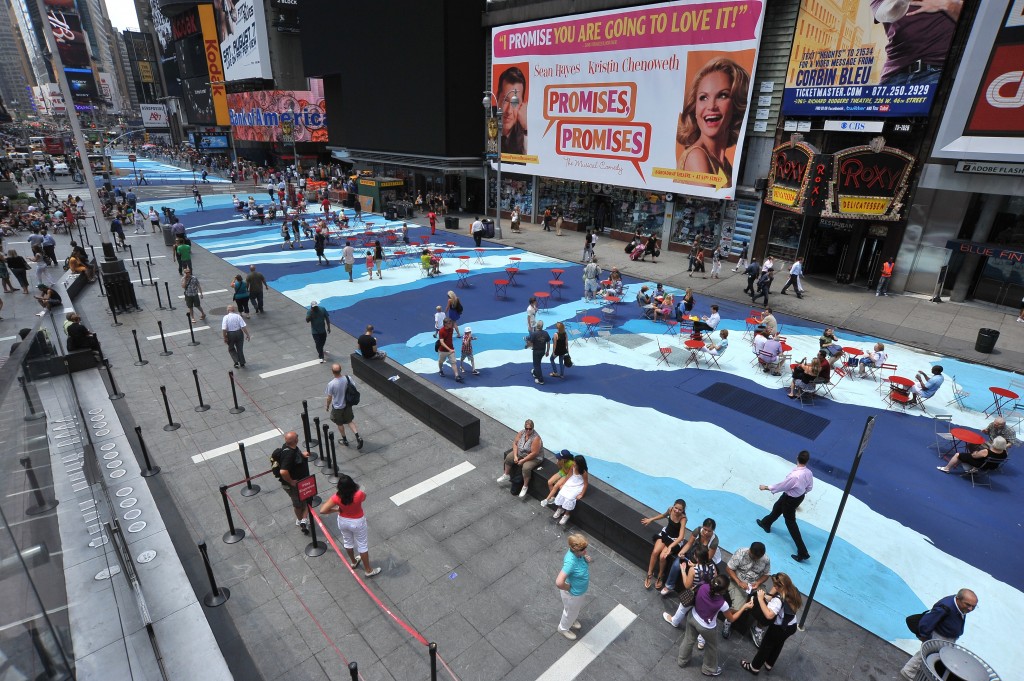