“Violent mobs have rampaged through several Indian cities this week in a last-ditch effort to stop the film [Padmaavat], based on a five-century old poem about a Hindu queen, Padmini, who immolates herself rather than be captured by a conquering ruler. … The film crew has been attacked, sets have been vandalised, hardliners have threatened to mutilate the lead actor and Indian states have pleaded with the supreme court and prime minister to ban the film.” 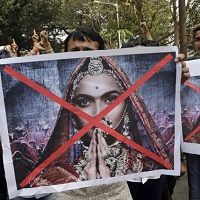