When the medieval-era shrine at the Church of the Holy Sepulchre was restored last year, archaeologists found a previously unknown marble slab with a cross carved on it lying atop the limestone presumed to be the burial bed. Mortar on that marble has now been dated to the 4th-century reign of the Emperor Constantine – seemingly verifying the traditional history that he sent his mother, Helena, to find the location and have the original church built. 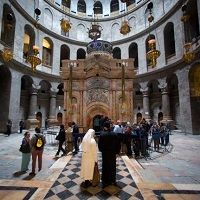