Taylor, the pianist beyond genre (age: 80) and still-groundbreaking music of Davis, the trumpeter/conceptualist (dead 18 years) are at major Manhattan venues this week, continuing to provoke and gratify. Cecil Taylor performs at the Blue Note tonight (Thursday, May 28) while “Miles From India,” mixing veterans of Davis’ electric bands with South Asian improvisers, has a four-night stand at Iridium. And last Monday, Davis’ prophetic On The Corner was revisited at Merkin Concert Hall.

Frequent readers of this blog know I’m fascinated (not obsessed) with Davis, Taylor and Ornette Coleman, who (as I write in my book published in 2008) opened myriad possibilities for jazz and other forms of music by leaving conventions behind. They didn’t do this alone: all three musicians created their best-known works with the help of imaginative collaborators, and generations of players have taken up their directions, continuing their explorations.

Yet Taylor’s complexly harmonic, multi-themed and abstractly rhythmic sound is most approachable when he’s playing solo or with one or two close compatriots (his format for tonight’s performance remains unannounced). And nobody plays Miles’ electrically-charged music, which evolved from 1967 past his death in 1991, quite as well as those who played it with him. Which is one reason why “Miles In India,” which features a rotating cast that includes guitarist Pete Cosey, saxophonists Bill Evans and Dave Liebman, tabla player Badal Roy, drummers Lenny White, Ngudgu Chancler and Vince Wilburn (Miles’ nephew), pianist John Beasley and bassist Victor Bailey besides trumpeters Nicholas Payton and Tim Hagans, saxophonist Rudresh Mahanthappa and Indian virtuosi Hidayat Kahn (sitar) and V.K. Raman (flute) seems so promising, and why the Merkin On The Corner tribute with Liebman and Roy, staged the day before the 83rd anniversary of Davis’ birth, worked so well.
Liebman and Roy were both being introduced to Miles’ ensembles when they recorded On The Corner in summer 1971, though they were in company with established Miles’ co-players Herbie Hancock, Jack DeJohnette, John McLaughlin and producer Teo Macero. There were two sessions for what resulted in an album of less than an hour in length (but now rereleased as a six-cd boxed set), brashly presenting beat-heavy, melodically dense jams, inspired by Sly Stone, James Brown, George Clinton and Karlheinz Stockhausen but surging past them to depict the challenges and contradictions of the era’s street culture — which foreshadowed the emergence of rap and hip-hop, studio manipulations of music-made-live, global, trance and dance styles that dominate today.
Though Liebman and Roy weren’t very happy with the sessions after they were done, they acknowledged in a pre-concert talk I hosted at Merkin (I also wrote the program notes) that Miles must have had some plan, and that the music has indeed endured. That doesn’t mean they returned to it for note-by-note repetition — that would have been an anti-Miles way. Instead, with Graham Haynes on cornet (using a paper plate and plastic cup to approximate Miles’ wah-wah pedal), creative pianist Karl Berger, guitarists Kenny Wessell and John Benthal, bassist Dick Sarpola and drummer Tim McLafferty they were spontaneously interactive and expressively evocative. They played Davis’ songs “Ife,” “Rated X” and “Jean Pierre” besides On The Corner‘s titular groove and “Black Satin,” which Lieb identified as the “one melody” that was sketched out in advance for the album. Liebman played tenor and soprano saxes and a simple wood penny-whistle, conjuring moods of the moment that harkened back three decades without lapsing into nostalgia. The band’s attentiveness to shaping the overall improvs matched its feeling for the skronk of the Davis original; the musicians, initially unsure if their efforts would come off, were pleased at the show’s end as was the audience of some 300, which brought them back with a standing ovation to encore by dipping for a second time into the nursery-rhyme motif of “Jean Pierre.”
Miles In India, produced in 2008 as an two-cd album by Bob Belden, extends both electric 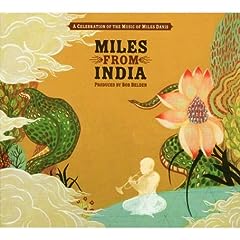 and acoustic-era Miles (like tracks from his 1959 masterpiece Kind of Blue) to a likely, if not predictable intermingling with the high art of Indian improvisation. Miles was famously an early proponent of modal jazz, and Indian traditional musics have been characterized (wrongly, according to Rudresh Mahanthappa) as modal — that is, not based on Western European chords and harmonic concepts. These principles matter more directly to musicians than to listeners; in practice, Miles’ music (interpreted by such of his stalwards as Liebman, Roy, Ron Carter, Jimmy Cobb, Chick Corea) and the South Asian players’ (notably keyboardist Louis Banks) cohere without conflict, arriving at new if not always revelatory conclusions.
Still, the album was a studio concoction, the musicians recording tracks separately that were eventually assembled whole. I haven’t heard Miles In India performed live, and I’m eager to. Eager to hear Ornette Coleman, who’s just returned from a tour of South America, as well. But those of us in New York may have to wait until next September 26 for that opportunity — when Coleman opens the 2009-2010 season with his Jazz at Lincoln Center debut.

What if there's more to jazz than you suppose? What if jazz demolishes suppositions and breaks all bounds? What if jazz - and the jazz beyond, behind, under and around jazz - could enrich your life? What if jazz is the subtle, insightful, stylish, … END_OF_DOCUMENT_TOKEN_TO_BE_REPLACED

Reviewing a sleeping giant, ESP Disks before its early '00s revival  Howard Mandel c 1997, published in issue 157, The Wire It was a time before psychedelics. Following the seismic cultural disruptions of the mid '50s, rock 'n' roll had hit a … END_OF_DOCUMENT_TOKEN_TO_BE_REPLACED

[contextly_auto_sidebar id="IFeXJPobvykRyuU4dU68FilRPv0EE8oC"] This is a complete version of the feature on pianist Matthew Shipp I wrote for The Wire, published in February, 1998 Is this the face of New York's jazz avant now? Pianist Matt … END_OF_DOCUMENT_TOKEN_TO_BE_REPLACED

A 1990 interview with drummer Rashied Ali, about his relationship with John Coltrane. … END_OF_DOCUMENT_TOKEN_TO_BE_REPLACED

Miles Davis intended On The Corner to be a personal statement, an esthetic breakthrough and a social provocation upon its release in fall of 1972. He could hardly have been more successful: the album was all that, though it has taken decades for its … END_OF_DOCUMENT_TOKEN_TO_BE_REPLACED