“As [Kelvin Moon] Loh sees it, the new show preserves the integrity of Gilbert & Sullivan’s composition while stripping away the irrelevant junk that has crept into productions over the years. … There are no taped-back slant eyes or faux-hawkish Samurai hairlines, just stage makeup and severe Victorian middle-parts.” The key device is a newly-created prologue featuring Gilbert, Sullivan, and producer Richard D’Oyly-Carte themselves.

“The 30,500 sq. m museum will be funded with a $450m donation from the Hong Kong Jockey Club, the city’s biggest private charity. The Hong Kong outpost will likely have a contemporary style as it will be designed by Rocco Yim, the Hong Kong architect who designed the new Hong Kong government complex.”

“Portraits of gay life in mainstream culture are no longer rare; they have been proliferating for decades. As a result, no one play (or movie) bears the burden of either seeming to affirm, or attempting to negate, stereotype. You might argue that it’s a sign of progress that these writers felt no compunction in writing about troubled, lonely gay characters. Nobody seeing any of these plays today would come away assuming it represented the sum total of gay men’s experience.”

We appear to be confronted with two very different sets of criteria regarding what can be considered a “safe space.” One is rooted in alternative populations seeking respite from the omnipresent social factory and its all-pervasive marketplace; the other is based on municipal fire-code regulations intended to prevent the type of tragedies that the Ghost Ship now signifies.

Streaming music services such as Apple Music, Spotify and Tidal are shifting not just how music is consumed, but increasingly how it is funded, created and marketed. The talk of the industry is increasingly about playlists and how labels and artists can seed their music into high-rotation mixes on streaming services to blend their new offerings with old favourites.

“With streaming rather than downloads, access replaces ownership and the commitment is of time, not money. That’s still significant, but it doesn’t feel so irrevocable. Where downloads and playlists favored the lone song, streaming gives the artist and the album a fighting chance again. Anyone interested in a particular artist, from die-hard fans to novelty seekers, can listen to a whole album repeatedly — not just song samples, not just YouTube choices — and let subtler material sink in.”

“When we looked at how many active Facebook users in a given ZIP code “liked” certain TV shows, we found that the 50 most-liked shows clustered into three groups with distinct geographic distributions. Together they reveal a national culture split among three regions: cities and their suburbs; rural areas; and what we’re calling the extended Black Belt — a swath that extends from the Mississippi River along the Eastern Seaboard up to Washington, but also including city centers and other places with large nonwhite populations.”

Anne Midgette: “My keenest experience of the Kennedy Center Honors this year had to do with the marginalization of the high arts. This is not usually my position: I have no problem celebrating the artistry of popular culture, placing Beyoncé’s “Lemonade” above the level of many works of contemporary art music or recognizing the quality of “The Wire” and other high-level made-for-television series. And I have been comfortable with the idea that in what is essentially a knockoff awards ceremony, the Kennedy Center should seek to honor the best of American art. But fully recognizing just how marginalized my field is, both before and during the ceremony, was sobering.”

The young demimonde celebrity of the ’00s had a hell of a backstory, which turns out to have been made up by a middle-aged “fat Jewish girl” from Brooklyn. (Her sister-in-law made the public appearances in a red wig.)

The Adams family (specifically, Abigail and John Quincy), like many of their day, saw the play as a tale of the dangers of race-mixing; white 19th-century Americans de-blacked the title role; Paul Robeson saw it as an indictment of white racism (and claimed the role for black actors ever afterward). “For more than 200 years, Americans have fought over Othello’s race as a way of fighting over the meanings of race itself.”

“Portraits of gay life in mainstream culture are no longer rare; they have been proliferating for decades. As a result, no one play (or movie) bears the burden of either seeming to affirm, or attempting to negate, stereotype.” Charles Isherwood looks at five shows presented in New York this year.

Indra Kumar Jha makes his living taking pictures of the funeral rites at the burning ghats on the Ganges River in Varanasi.

Mehta, the musical director of the Israel Philharmonic for nearly half a century, said that he’ll step down in 2019.

The autobiographical “Wishful Drinking,” which later went to Berkeley Rep, Broadway and HBO, got its start at the Geffen. That theatre’s artistic direector: ‘We found with ‘Wishful Drinking’ her appeal absolutely crossed all boundaries … men just love her, women absolutely love her, from young to old. She was just universally admired and loved and had such a unique brand of humor.’

“Is it naïve to be optimistic? Foolish to harbor hope? Three modes of inquiry – neuroscience, history, and psychology – supply complementary and contrasting perspectives. By putting them together, you can start to see what good hope and optimism might do you. And the country.”

Wear comfortable shoes to Broadway, people. Along with “Dear Evan Hansen,” other shows “that are regularly offering standing room these days are such favorites as ‘Hamilton,’ ‘The Book of Mormon,’ ‘Beautiful,’ ‘Waitress,’ ‘Kinky Boots’ and ‘School of Rock.'”

“Jeffrey Slonim didn’t shout. While the other red carpet reporters tried to get the attention of celebrities by yelling their names, he usually waited for them to come to him. And they usually did.”

“Literally meaning ‘whipped’ or ‘whisked,’ the move is comprised of 32 consecutive turns on one pointed foot. If it sounds impossible, it’s because it almost is. So much so, that this video has been made to explain the physics of it.”

Until now, the piece had only been referred to as “Play Without a Title, and the poet/playwright had completed the first of its planned three acts when he was murdered in the Spanish Civil War. Writer Alberto Conejero has now completed those two acts – and given the work a rather loaded title.

“Adams famously carved out one of the greatest second-acts in literary history, establishing himself as an important talent at age 52 after a career spent in civil service.”

For a start, it’s not the group that sang Pharrell’s “Happy” and the theme from Skyfall on YouTube. (That group is the successor to the KGB’s house choir.) The Alexandrov is altogether more prestigious. An explainer from Zachary Woolfe and Bolshoi Confidential author Simon Morrison.

Caryl Churchill is the presiding playwright of our era. At 78, every play she writes is an event – not because of their rarity, or a forelock-tugging spirit of sentimentality, but because … read more

Ray Brown wrote “Gravy Waltz,” with a lyric by comedian and talk show host Steve Allen. Allen recorded the piece on piano and got extensive airplay with it in … read more

If my family had any dark secrets, they went to the grave with my parents, grandparents, aunts, and uncles. But like all families, we did have a few subjects of which we preferred not to … read more

Patterns of rising and falling inflection are vital to a lot of music. Purely instrumental music often encodes emphasis-patterns that resemble speech, or song. (Linguists prefer the term “intonation” to signify these … read more

Arguments trying to make a case for the value of the arts usually come down to two ways of thinking about them: their intrinsic value as something inherently good or their ability to improve society in some way. David Ian Moss argues in the Stanford Social Innovation Review that this is an unproductive frame for the argument:

One problem with the intrinsic vs. instrumental distinction is that it’s something of a false dichotomy: Interrogate a dedicated arts supporter about why she believes funding is important, and you’ll eventually uncover reasons that are not specific to the arts. The arts teach us how to see and understand the world? So do history books. The arts provide a space for exercising creative potential? So does electrical engineering. One could reasonably argue that all the benefits of the arts are instrumental at some level, in service of some larger goal. But what is that goal, exactly? When we try to maximize the good in the world, what does that actually mean in practice?

If we think of wellbeing as a holistic measure of what is good in the world, then we can justify philanthropic support for the arts ever so simply by: 1) the arts’ contribution to wellbeing; and 2) philanthropy’s enabling of that contribution. Seen this way, the false distinction between intrinsic and instrumental benefits falls away, and instead we can think of them as direct and indirect contributions to wellbeing.

Makes sense. Particularly in a time when we’re obsessed with defining metrics to quantify engagement, impact and value. The problem with insisting on standardized measures for valuing art is that value is a relative and personal thing. Worse – standardized measurements might incentivize the wrong things. For example, measuring number of students served doesn’t measure the quality of that service. And yet, arts education funding is often dependent on numbers of experiences rather than depth of impact.

Some authors and publishers are wary. “We have seen it all before. … A few people are championed and then people lose interest because they think the issue has been addressed. And then it all reverts back to the way it was before.”

“You’re not going to luck into this career. … You have to work for it, nonstop, even once you have a job. And you have to be careful not to let that change your love of music.” (Ricky is the cello, y’all.)

Here’s what lies ahead after we all catch up with this year’s Oscar nominees and winners.

And social media is to blame: “People just want to share what they’re experiencing, even if it’s unsharable.”

The woman who played Princess (and General) Leia, wrote Postcards from the Edge, spent decades punching up scripts in Hollywood, and made it OK to publicly speak about mental illness, suffered a heart attack on a plane ride from London to Los Angeles on Dec. 23 and died on the morning of Dec. 27. 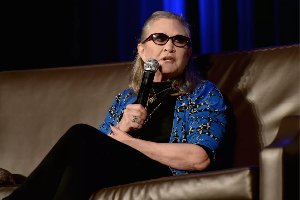