‘You live on one continent and work on two others.’ You have ‘a firsthand knowledge of the sunrise over the Po, the sunset over Shenzhen, the crackle of the midday sun as the Acqua Alta wets your calves’. You might be a poor culture-ronin, but you have accidentally attained an enviable ‘air of weary cosmopolitan glamour’, which follows you back to your shabby, expensive ﬂat. But with climate change… – Frieze

Most people who live near the Cateura dump outside Asunción, the Paraguayan capital, scratch out a living by digging out anything that can be resold, and buying a musical instrument would be an impossible dream. But local carpenter Nicolás Gómez and music teacher Favio Chávez decided that they could build musical instruments and give children there free music lessons — and so the Recycled Orchestra of Cateura was born. – Al Jazeera

UNESCO and the Fate of the Literary shows how, when confronted with people across the globe who perceived their own lives “in ways radically antagonistic to the requirements of capitalist production,” UNESCO’s cultural programming was developed to “acknowledge, integrate, manage, and assuage” that antagonism. – Los Angeles Review of Books

In 2011, “the industry itself was broken, transformed from a system of honor and veneration into one of shame and denigration, which treated its products as little more than commodities to be bought and traded.” Then Instagram happened. “In the end, the solution was so straightforward. Celebrities simply became their own paparazzi.” – BuzzFeed

This is bad. “From Bethune to Dijon, noted directors landed in the National Drama Centers – devoted to theatrical creation – thinking they were touching the Grail: a place and means to make their work exist on a large scale in the service of the greatest number. They discovered companies that were cumbersome to maneuver, using tools that were often obsolete or to renovate, and subsidies at half mast.” Now it’s all lawyers and consultants. – Le Monde

“The second decade of the 20th century began at the apex of naivete about the potential for the internet to enhance democracy and improve the quality of life on Earth. By the end of 2019, very few people could still hold such a position with honesty.” – Wired

The banality of encores has long been a frustration for some musicians, but, in recent years, a growing number of notable acts have taken a stand against performing them at all. – Toronto Star

“Like all stories, it’s just about cats, but none of these stories work without the big issues underneath. Eliot was writing as much about humans as cats; he was writing about humans through a feline prism. Ultimately, why I wanted human cats, not actual cats, [in the film] was that, if they’d been actual cats, it would have totally missed the point of the duality of the poetry.” – The Atlantic

“Writing is lonely; directing and acting, if you’re overlapping them, is challenging but fun. But producing is just pushing a rock up a hill. And sometimes it rolls over you on the way back down.” – Los Angeles Times

“Every morning, I wake up before dawn to take a walk with my dog around the countryside, before I return to my home (still before dawn) to bake a loaf of bread and write for four hours in my notebook.” – The New Yorker

From Noam Chomsky on the responsibility of intellectuals after 9/11, to our forum on why empathy can be a bad thing, the following were all ambitious efforts and help chart a decade of thinking. – Boston Review

“How should museums relate to their surroundings? What are the most meaningful ways for them to connect and work with their communities? … These questions date to the beginning of the community museum movement in the 1960s and remain foundational to the field.” Anna Diamond reports from a Smithsonian symposium on the subject. – Smithsonian Magazine

Since 2013, Radio Alwan, which started as community radio in a Syria just breaking out in civil war, broadcast politically neutral news and other programming to Aleppo and Idlib on FM as well as online. The U.S. funding that supported the station has been withdrawn by the Trump administration, Radio Alwan is now off the air, and its staffers are stuck in a country that seems not to want them. – BBC

“This past year saw no shortage of controversies in both the art world and the real world. And perhaps more than ever before, the distance between those two worlds seemed to collapse, as artists and activists began demanding with unprecedented strength that patrons — both board members and corporate sponsors — answer for their actions outside the confines of the museum. We zeroed in on 11 hot-button issues that ignited heated debate in the art world this year, and the particular questions they provoked.” – artnet

A previously unknown groups calling itself the “Popular Nationalist Insurgency Command of the Large Brazilian Integralist Family” has claimed credit for a Christmas Eve incident in which Molotov cocktails were thrown at the Rio de Janeiro offices of Porta dos Fundos, the comedy group that created The First Temptation of Christ, which depicts a stoner Mary and put-upon Joseph throwing a 30th-birthday party for Jesus as he returns from his 40 days in the desert with a “close friend” named Orlando. – BBC

He performed at the Berlin State Opera in his native East Germany and at Milan’s La Scala, as well as a 25-year run at the famed Salzburg festival. One of his specialties was performing and recording the songs of composers Franz Schubert and Robert Schumann. – Washington Post (AP)

In 2012, Burning Man organizers reimbursed the BLM nearly $1.4 million in expenses, a 60 per cent year-over-year increase, though the event population increased by only 4 per cent that year, according to the lawsuit. The following year, the same bill was $2.9 million, according to the lawsuit. In three years, the cost recovery charges increased by 291 per cent, and the Burning Man event population increased by 39 per cent, Black Rock City attorneys said. CBC (AP)

From “The Big Short” to Naomi Klein to “Normal People,” a list of books that made an impact. – The Guardian

Humor is about connection—shared references, shared emotions, shared perspectives. The best comedians both surprise and unite the audience. They create a moment. But moments keep coming. Over time, attitudes change, and humor has to change with them. When older comedians complain that they can’t perform at colleges anymore because the audiences are too “politically correct,” they are missing the point. – The New Yorker

This was the year of our national discontent and contentiousness, as manifested in the artworld by the rallying cry, “Decolonize Museums!” – Lee Rosenbaum

“I felt moved and buoyed by the idea that I could write something that didn’t exist, and that there’s a little girl right now still living on the short end of the street in New Orleans East where I grew up. And I wrote it for her, so that there could be some history already in existence. And, you know, one of the striking things about New Orleans East is the way in which it doesn’t always appear on a map of New Orleans. So I wanted to quite literally put New Orleans East on the map.” – PBS NewsHour 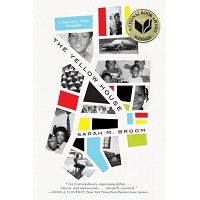