“The quest for increased personal productivity – for making the best possible use of your limited time – is a dominant motif of our age. And yet the truth is that more often than not, techniques designed to enhance one’s personal productivity seem to exacerbate the very anxieties they were meant to allay. The better you get at managing time, the less of it you feel that you have.”

Demetrius Cunningham, an inmate at an Illinois correctional facility, wanted to learn to play so he could accompany the prison’s chapel choir. But he had access to a piano for only an hour a week. So he mocked up a model keyboard and got busy.

Chattanooga Symphony concertmaster Holly Mulcahy writes about what she has performed for prisoners, how she gets them to talk about what they heard, and what they said.

No, it’s not in Paris or Bologna; it’s not even in Europe. Or Asia, for that matter. What’s more, this university was founded, almost 1,200 years ago, by a woman.

“Something rare happened this year: the best American film releases – Moonlight, La La Land, and Arrival – were also the most beautiful.”

“Gone is the lone genius with a shed full of goofy contraptions and bubbling liquids. Today’s fictional researchers work in realistic labs, with high-tech equipment, and in teams with others. Their dialogue is scattered with words from the latest scientific literature, and they have so much depth and personality that they carry entire shows.”

Ian David Moss argues that funders have tended to keep their arts programs in a “silo” rather than connecting them with their organizations’ wider goals.

In fact, he’s wanted to do it for as long as he’s had his own company. “Virtually every project I have undertaken in my career has had this potential problem attached to it,” he says. “Much-loved pieces that you touch at your peril!”

Perhaps there’s a crisis in the arts in rapidly gentrifying Denver. A new researcher at the University of Colorado Denver has some thoughts: “I want the city to work together with creative producers to benefit both. Sugar-coating anything or obscuring facts is not going to help either side.”

“It’s like when you want to make a dish in the kitchen, you have good prime materials. Good tomato, good zucchini, good fish. Everything is so fresh. You just need to put it on the grill. Me, Diana, a good conductor, a good director: The ingredients are so good that it’s going to come out something nice.”

“When it comes to evaluating information – and separating the real from the bullshit – kids aren’t that different from adults. .. [So why do] kids still happily wait on line to sit on a jolly guy’s lap and throw their energy into composing letters to the North Pole? The answer: Because we tell them it’s worth their while.”

“The saga started in 1987, when Eddie Murphy … thought the role of the son would be an opportunity to tackle serious material for a change, and Paramount Pictures bought the rights for him for more than $1 million, at that time one of the highest sums ever paid for a theatrical property.”

The list of “immersive” events on any given day is extensive. Why? “Immersive events carry the promise of intimacy and interactivity, of a unique experience, of relevance with youthful audiences who increasingly yearn to participate in their art experience rather than view it from afar. “

Sure, the infomercials speak all too highly of it, and it’s kind of pricey, but the Wave was created from genuine engineering expertise and hard work. Here’s the story of how the speaker system went from Dr. Bose’s lab at MIT to the Sharper Image catalogue and QVC.

“Gilt – gold’s application to metal, whether powder, leaf or plate – is the assertive surface of self-importance. We seem to be having a Midas moment. With the election of the commercial Sun King Donald J. Trump to the presidency, and the pedestrian aristocracy of gold sneakers walking the street … there is again the gleam of gilt in the public eye.”

“Premium tickets for Broadway shows can cost north of $200. Adjusting for inflation, the $25 ticket in 1984 should cost only about $58 today. Something is not sufficiently aligned. The questions I often ponder are: How do high ticket prices limit accessibility? How much profit is profitable?” Marshall Jones III, producing artistic director of the Tony-winning African-American troupe Crossroads Theatre Company, discusses the ways he and some of his colleagues have addressed this issue.

Shamel Pitts had spent seven years with Batsheva, Israel’s most famous dance company, when he created a solo work to a spoken-word soundtrack he assembled and recorded himself. A director friend of his filmed the work, and now Pitts is back in New York, touring the film and live show around the Western Hemisphere.

“Wages for actors and stage managers working in subsidised repertory theatre are expected to increase by £50 per week, under what Equity is calling a ‘massively good settlement’. The union estimates that the new agreement could result in ‘at least’ an additional £1 million going into members’ pockets by 2019.”

The Wild West of business models since music went digital hasn’t worked out very well for musicians. The old record labels that controlled the industry might have been good for the artists they turned into stars, but they weren’t particularly good for the average musician. When musicians suddenly could record, release and promote their own music, reaching fans directly, there was the brief hope that artists would have more control and that more musicians could make a good living. Hasn’t turned out that way so far.

And now, the big streaming companies and social media platforms are consolidating their power, and it’s starting to look like a new set of power brokers are emerging. Apple, for example:

Since its debut in the summer of 2015,  Apple Music has separated itself from Spotify, the industry’s streaming leader, by trying to become a one-stop shop for major artists — part platform and part promoter.

“I don’t think anybody could argue against the incredible value of Apple marketing,” said David Bakula, a senior music analyst for Nielsen. “There are artists they latch onto and say, ‘This is something we are going to heavily promote.’ It makes one of the largest publicly traded companies in the world a sort of tastemaker.”

So Apple is both the platform and the promoter. Meaning? Meaning that Apple is increasingly owning the front and back ends of the business. Be an Apple artist and you get preference and prominence in the huge iTunes/Apple eco-system. So if you’re not part of the Apple family? Will anyone be able to find your music?

“We all have to reinvent ourselves now that paid streaming is starting to lock in. There’s going to be a lot of new technology, and everyone’s going to be reforming their roles. We have no interest in being a label. But we do have interest in making our platform the one that’s best to communicate with the audiences.”

“The postmillennial comeback of Brutalism is not surprising, given today’s worldwide vogue for strenuously exhibitionistic architecture enabled by computer design, which has resulted in grotesque behemoths far stranger than anything achievable through the relatively low-tech means of concrete construction. Some older observers will see this fascination with grandiosity and ugliness as the return of the repressed, a reminder of why Brutalism fell into disfavor and disrepute in the first place.”

In fact, the datafication of everything is reductive. For a start, it leaves behind whatever can’t be quantified. And as Cathy O’Neil points out in her insightful and disturbing book Weapons of Math Destruction: How Big Data Increases Inequality and Threatens Democracy, datafication often relies on proxies—stand-ins that can be enumerated—that bear little or no relation to the things they are supposed to represent: credit scores as a proxy for the likelihood of being a good employee, for example, or “big five” personality tests like the ones used by the Cambridge Psychometrics Centre, even though, as O’Neil reports, “research suggests that personality tests are poor predictors of job performance.”

“I did not realize that the life I was living was considered in any way provisional or experimental by others: I thought it was just life. And when I wrote a novel about the London I grew up in, I further did not realize that by describing an environment in which people from different places lived relatively peaceably side by side, I was ‘championing’ a situation that was in fact on trial and whose conditions could suddenly be revoked.” 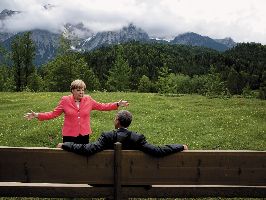