This falls into the category of what you’ve learned that you wish you’d known when you started out as an artist.

Phyllis Wheatley was abducted from the West African coast and sold to a Boston couple at roughly age seven. Their daughter taught the young slave to read, and within two years, Phyllis fluently read and wrote English and started learning Latin. When she was 18, her owners took her to London to publish a book of her poems, and – once disbelieving publishers and others were convinced that Phyllis had written them herself – she became famous on both sides of the Atlantic.

Most of us believe we’re working smarter not harder. The fact is though, we’re caught in scarcity’s flywheel and it’s cascading a fire fighting, scarcity mindset throughout our organizations, magnifying the problem as things become worse for everyone. We’ll never “catch up.” Worst of all, we’re often oblivious to what will help us out of the bind as we focus on the fires, or assume if we just score that big grant — come onnnnn, lucky major foundation grant! — or sell out our season, we’ll finally be able to get ahead.

“It turns out there is another – even two – out there. And at least one dealer thinks they could be worth as much as $200 million each. Both are smaller-scale, devotional paintings depicting the same image: the Virgin Mary with the Christ child in her lap. The baby is holding a cross-shaped stick used to wind yarn, which has inspired the shared name, The Madonna of the Yarnwinder.”

Not only does the scenario offer interpretative possibilities ranging from a simple child-oriented extravaganza to a sexual awakening for young Clara, it has proved flexible enough for localized versions everywhere from China to Hawaii to South Africa. (Not to mention Mark Morris’s trailer-trash Americana.)

“Lincoln Center was the crown-jewel project of the Mayor’s Committee on Slum Clearance, which was overseen by Robert Moses, the man who reshaped the city in the mid-20th century.” As Robert Caro wrote, “Moses was not making even a pretense of creating new homes for the [7,000-plus] families displaced.”

Anna Louie Sussman looks at the implications of the legislation.

Intuitively, most of us arts types sense (or at least want to believe) that the answer is yes. Now the Mellon Foundation is funding a study to get real data to back up that answer (or not).

Commenting primarily on the structure of the sector and noting that 6.7% of the workforce in 2016 were EU nationals and there were 2 million jobs in the creative industries, the publication has been met with scorn from the arts sector for glossing over issues such as freedom of movement and refusing to include ‘sector views’. The Committee received these from the Government but “decided not to publish”.

“Harry Potter and the Sorcerer’s Stone,” the first book in the series, was published in 1997. The film version of that novel appeared in 2001. This year’s crop of college freshmen was born between those two cultural milestones, which means a huge number grew up reading the Potter books or watching the movies or both. Many of them have an expectation (or perhaps a hope) that going off to college means going off to a campus that resembles the Hollywood version of Hogwarts, full of peaked roofs, gargoyles, stone floors, stained glass and huge dining halls warmed by multiple fireplaces.

This year (2017) was just of taste of what’s to come, the paper says. There’s political entertainment on its way, including A Wrinkle in Time and Black Panther, but that’s not all (not by a long shot). “If Trump is agreed to have killed off political satire, political history could well be taking its place.”

Artist Bridget Quinn and a friend were getting ready to do some improvisational singing in abandoned tunnels when they noticed something seriously wrong. “The smell was really bad. And I’m familiar with non-point-source pollution, which is, like, oil coming off of the street after the rain, but this seemed like a constant flow.” Then a fire department tested the water …

Basically, fame did him in. “His love affair with an idealized America was short-lived and hard-felt. Apart from the country’s great writers, he found Americans malodorous, ill-mannered and invading his privacy.”

Of course, they were two men, and of course, they made a YouTube video. “In the video, the two males are seen gaining entry into the building through an unlocked door that gives them access to the set of the National’s production of Follies. They are then seen leaving the London complex the following morning after spending the night sleeping backstage.”

Gomes resigned as a law firm investigation the allegation of behavior from eight years ago. Neither American Ballet Theatre “nor the law firm that was handling the investigation would give further details about the accusation against Mr. Gomes. ‘A.B.T. does not tolerate the alleged behavior,’ [the chairman of the board of trustees] said in his statement. ‘I am profoundly disheartened by this matter,’ he added.”

Plays running at 70 or 80 minutes are, according to Company Theatre’s co-artistic director Philip Riccio, “a newer phenomenon,” perhaps connected to the fact that “most of our playwrights come up through the Fringe festivals”; the majority of Fringe shows need to come in at under an hour.

“In a world filled with distractions and notifications and devices that do everything, the Kindle’s lack of features becomes its greatest asset. But readers also want to read everywhere, in places and ways a paperback can’t manage. They want more tools, more features, more options, more stuff to do. Amazon’s still working out how to satisfy both sides. Whatever route it takes, the next decade of Kindle is likely to be even more disruptive than the last. First it changed the book business. Next it might help change books themselves.”

“Across America, on both sides of the Mason-Dixon Line, the races were kept separate at the theater. Black people sat apart in the upper galleries or were excluded entirely, by custom and, in some southern cities, by law. As hybrid places—private associations open to the public—theaters were subject to municipal authority, but property owners possessed the liberty to exclude or restrict at will. The common law recognized no right of amusement seeking. After emancipation, statehouses controlled by Radical Republicans banned distinctions of race and color in public conveyances and resorts. But the legislation was evaded simply by tickets stating that proprietors had discretion to exclude anyone. Nor did it carry a positive grant of rights; it regulated places rather than entitling persons.”

“Rumours about Dutoit’s behaviour were rampant for years. I confess straightaway to having done precisely nothing with them. Possibly the first reference in the Gazette to the Dutoit dark side, thickly veiled, was in the column I wrote last week on the case of disgraced former Metropolitan Opera music director James Levine.”

The dilapidated 1919 structure, a former furniture store that was remodeled with an Art Deco flair in the late 1930s, has been on and off the market for more than a decade as a succession of owners unsuccessfully attempted to redevelop it as a dialysis center, a vegan restaurant, a brewery and an organic grocery store.

“This new school of public sculptures, monuments and plaques range from lifelike portraits of millennial rappers to boulders honouring the lives lost in the Orlando massacre. It proves a new vision is under way to commemorate America’s updated values.”

From the leotards in the Netflix comedy GLOW to a Janet Jackson backup dancer who got cheers of her own to the single-take episode of Mr. Robot, “these 12 blink-and-you-might-have-missed-them cultural moments of 2017 brightened up a year otherwise defined by the threat of nuclear war, natural disasters – from hurricanes to wildfires – that left hundreds of thousands homeless, a string of sexual harassment charges against some of the country’s most prominent political and entertainment figures and yet more terrorist attacks.”

“The museum, which opened to the public in February, has been at the centre of an ongoing battle over national memory. The right-wing Law and Justice party (PiS), elected to government in Poland in 2015, is determined to use the museum displays to present the “Polish point of view” while its critics argue for the autonomy of historians and museums.”

“What may seem disarmingly simple is actually incredibly complex. The dame is definitely a man in a dress, and one who needs to combine a character with strong maternal instinct, a mouth that’s full of broad innuendo and ensure that the joke is always on them. The great dames also form the bridge between the audience and the action on stage. … A great frock and wig can only take you so far.”

“Since claims emerged of a newly discovered chamber beneath the church, an archaeological debate has raised questions on the ultimate resting place of his remains. Theologians say the most logical possibility is that his body was smuggled to Italy in the 11th century. But Turkish officials believe his remains may lie beneath the Byzantine church.”

“Museums aren’t just working to cultivate new audiences because inclusiveness is a moral imperative — there’s also a strong business case for widening their nets. In an era of Snapchat videos and Instagram art, American cultural institutions are also trying to figure out how to cultivate the next generation of museum goers. 23 percent of the U.S. population is under the age of 18, according to census data — a generation that’s not particularly white, and not particularly wealthy. By 2020, more than half of all American children will be members of a minority population.”

“In terms of longevity, Al falls somewhere between The Simpsons and Saturday Night Live, though rather than an ever-cycling comedic ensemble, Al’s just one bespectacled, poodle-haired accordionist with an adenoidal voice who’s never done illegal drugs in his life and kept the same band and manager for the duration of his career.” Andy Beta looks at how he did it.

“The children who enter these competitions train up to 30 hours per week, primarily on weekends and after school. Because children must compete in many styles – hip-hop, ballet, jazz and others – versatility is essential, and training can be rigorous to the point of extremity.” Says one judge, “It was never like this when I was a kid. These kids are like gladiators.”

The two were suspended two weeks ago over allegations of “inappropriate conduct”; following an investigation, they were dismissed on Thursday. “It’s a stunning end for two of WNYC’s most recognizable voices: Lopate interviewed everyone from Barack Obama to Liza Minnelli on his long-running weekday show, while Schwartz maintained a devoted following for his weekend program dedicated to the American Songbook.” 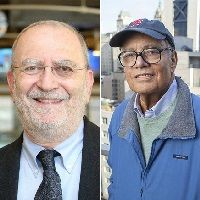