“The Lighthouse Guild sent a letter to students in June — in large print, for the visually impaired — notifying them that [the Filomen M. D’Agostino Greenberg Music School] would no longer be part of the Guild’s future and that it must leave the Guild’s building on West 64th Street [in Manhattan].” — The New York Times

Despite the occasional marketing hurdle, clearly these books are selling just fine. That’s the surprising thing about all of these supposedly irreverent titles. The premise of their humor is that they’re shocking, but they’re now so prevalent that it’s hard to imagine being shocked by them. They are “the product of a culture in which transgressing social norms has become an agreed-on social norm.”  – Slate

At least, most of them aren’t. Here’s an in-depth look at everything from Ruth Bader Ginsberg action figures to Ocean’s 8 to Halloween to Suspiria, with a final stop at Widows and Destroyer. – BuzzFeed

The community-minded Celeste Ng found wide success with her 2014 debut Everything I Never Told You, and absolutely wild success with Little Fires Everywhere, her novel of race, class, and adoption in an idealistic suburb. Her fans – and broadcast adapters – include Reese Witherspoon and Kerry Washington. Her focus is on lifting others with her: “Ng’s strategic benevolence is aimed at promoting her peers, of course, but also at fixing skewed, reductive notions of representation.” – The New York Times

Of course it was. That’s long been the plan – and 2018 was the year it finally went into effect. – The Guardian (UK)

When Bach’s heavy reliance on parody technique came to light in the nineteenth century, scholars found it embarrassing. It ran counter to the Beethovenian principle that composers must write new, highly original pieces, and the realization that several of the St. Thomas Cantor’s most-revered sacred works—the Christmas Oratorio and the Mass in B-Minor, in particular—were derived largely from secular tributes to earthly kings and queens was difficult to accept. In more recent times, scholars have moved beyond those prejudices and embraced Bach’s use of parody, devoting much study to the brilliant ways in which he carried it out. – New York Review of Books

The most common method for evaluating a candidate’s potential is the unstructured job interview, which is a weak predictor of future job performance. The interview is especially used to assess culture fit. At worst, it boils down to a gut feeling of good chemistry or rapport that interviewers get from the candidate. At best, this results in well-meaning interviewers trying to ignore the very factors that cause that experience, such as charisma, attractiveness, and likability, as well as any attributes or background they share with the candidate. – Fast Company

The tradition has its roots in religion, of course, but also in immigration patterns. At the beginning of the 20th century, Jewish people were one of the largest non-Christian immigrant groups in the United States, as were Chinese people. That meant there were new populations that, by and large, didn’t see December 25th as a holiday. While most other shops and restaurants in U.S. cities closed their doors for a day, many Jewish and Chinese immigrants found something of a shared experience. – CityLab

The authority shared the call for submissions on Twitter earlier this month, asking: “Do you have a passion for design and creative branding development? Can you create a simple but visually impactful logo that captures the spirit of an exciting cultural and creative programme?” But the message attracted more than a dozen critical responses, with several users seeing the competition as a request for design work at below market rates. – Arts Professional

Can computers actually think? Well, they are designed to perform functions that humans perform through thinking. They expertly process information, present it at appropriate points in a conversation, and use it to draw reasonable conclusions. But thinking in this sense can just be a kind of high-level functioning. It’s another question whether iPals’ calculations are accompanied by a subjective awareness of what they’re doing. – Commonweal

“There’s no definitive case law determining this.” When the Copyright Act of 1976 was passed, it finally established rules around choreography, with some limited fair use cases around criticism and dance education. Strangely enough, it covered even pantomime, but not an individual dance move as we’ve culturally come to understand it in the ensuing decades. – The Verge

Beloved Seattle bookstores were closing their doors throughout the aughts, and those who remained open seemed to face an impossibly uphill task — who would pay full price for a book when you could buy it for less online? But there’s more to an indie bookstore than the price on a book’s cover. In a manner worthy of a great writer’s unexpected third-act twist, independent bookstores have made an improbable comeback in the past few years, both nationally and locally.  – Seattle Times

“From his early short essay ‘A Christmas Dinner’ in Sketches by Boz (1836) to his incomplete ﬁnal novel The Mystery of Edwin Drood (1870), in which an uncle appears to have murdered his nephew on Christmas Day, Christmas is sunk into his imagination like a watermark. … [And some friends] observed that Dickens’s enjoyment of Christmas seemed more determined, even ruthless, than one might expect from someone with a genuinely boyish sense of fun.” — Literary Hub

David J. Skorton, who became secretary of the Smithsonian Institution in July of 2015, is leaving in June to become president of the Association of American Medical Colleges. A cardiologist by trade, he said of his decision that “the possibility of trying to contribute something to the national challenges of health care is important to me.” — The Washington Post

“American critics called Mr. Moffat a consummate pro who could play any supporting role from Shakespeare, O’Neill, Ibsen, Beckett, Pinter or Shaw, as well as the lawyers, doctors, husbands and tough guys who are the stock in trade of movies and television — characters that make the stars shine and place the accomplishments of the ensemble above personal glory.” — The New York Times

We were looking for the Future Book in the wrong place. It’s not the form, necessarily, that needed to evolve—I think we can agree that, in an age of infinite distraction, one of the strongest assets of a “book” as a book is its singular, sustained, distraction-free, blissfully immutable voice. Instead, technology changed everything that enables a book, fomenting a quiet revolution. – Wired

Heidi Reitmaier is moving on in January to become deputy director of the Art Gallery of Ontario, where she’ll also serve as chief of public programming and learning. – Toronto Star

“Proposals to maintain the salary threshold, as well as the failure to include any measures to address the challenges faced by freelances, are hugely disappointing. It demonstrates government’s blindness to the major strains that Brexit and the current immigration system will have on organisations’ ability to recruit the talent they need.” – The Stage

The “wisdom of crowds” refers to the result of a very specific process, where independent judgments are statistically combined (i.e., using the mean or the median) to achieve a final judgment with the greatest accuracy. In practice, however, people rarely follow strict statistical guidelines when combining their own estimates with those of other people; and additional factors often lead people to assess some judgments more positively than others. – Harvard Business Review

“It’s an elegantly constructed, effortlessly listenable series that does exactly what you’d hope a general-interest opera podcast would do. It also avoids most of what you’d hope it would avoid—pandering, dumbing down, trying to make opera seem hip. (It gets away with its silly name, just barely, by claiming to “decode” what makes arias great.) The show seems to understand that there are plenty of people who know a little bit about opera and might like to know more; to do that, it makes use of the Met’s archive and extensive community of artists and thinkers.” – The New Yorker

Bach scholar Michael Marissen observes that, throughout the set, the composer has solo instruments do things that, in the accepted order of things at the time, those instruments simply didn’t do. (Marrissen couches the argument in Christian terms — “the lowly shall be exalted while the exalted shall be brought low” — which is almost always a safe approach with J.S. Bach.) — The New York Times

Owen Bennett-Jones writes that the network is now so top-heavy with senior managers who are terrified of negative public attention that it takes months to get a project approved — and that reporters who have serious stories to break are sometimes reduced to leaking them to The Guardian or The Times because their managers will only feel comfortable broadcasting those stories if they’ve seen them in print. — London Review of Books

“In the studio we’re so often created on,” David Hallberg, the American Ballet Theater principal who dreamed up the workshop, said recently. “I really wanted to give the dancers a chance to have a more inclusive part in the creative process.” Mr. Hallberg first introduced the idea of a choreographic workshop in 2010, but after a few tries it didn’t stick and he was too busy with his international career (and a major injury) to help keep it going. Now, he’s determined to make the Incubator a yearly fixture at Ballet Theater. 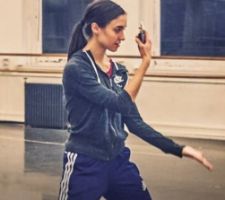