Even as the topical revue heads toward its final performance on New Year’s Eve, it still gets tweaked to reflect current news. (Donald Trump’s angry tweet at Greta Thunberg — he said she needed to work on anger management — made it into the script in a matter of hours.) Jo Schuman Silver, widow of Babylon creator Steve Silver, has been producing the show on her own since his death in 1995, and she gets a profile here from reporter Tony Bravo. – San Francisco Chronicle

In all of academia, not only theatre, women who teach become support for students rather than only academic help – and it’s burning the women out. One recent Ph.D. discovered that she could solve some of that burnout with the help of … a giant stuffed Pokémon character. – HowlRound

Just like Young Adult literature, YA theatre – or Teen theatre, perhaps – had an initially rapturous welcome, and a rapid cooling-off. “Critical consensus about Young Adult Theatre took a sharp turn when the subgenre became solidified, popularized, and canonized with the viral teen hit Be More Chill. Joe Iconis’s musical, which made it to Broadway thanks to a huge, enthusiastic teenage fanbase online, received vitriol from many critics who called it loud, hollow, and vapid.” – American Theatre

Students responded not only to one incident, in which the lecturer for the class was removed, but many other experiences at the college: “Some of the quotes and scenarios on the board read: ‘White male faculty member to a black female student: ‘Act more sassy,’’ ‘Holding a meeting about microaggressions where a student of color was told to stop being mean to white people,’ ‘Male director explaining to a female student what happens emotionally to a woman when she is assaulted’ and ‘Female-identifying students told to lower the pitch of their natural voices in production to ‘sound stronger.’'” – The Ithacan

Okay, Lois Smith is only 89 — and she’s currently on Broadway in The Inheritance. Estelle Parsons, 92, is at the Public in Tony Kushner’s A Bright Room Called Day. Vinie Burrows is 95 and begins an Off-Broadway play next month — and, as a Black actor, has spent much of her long career creating her own opportunities. Laura Collins-Hughes meets the three of them for tea and talk about staying in regular work at their ages. – The New York Times

“[She] is best known for having founded, in 1968, an electronic music studio at Hunter College in New York, where she taught composition and theory from 1966 until 1989. … [She] created a relatively small but prescient body of work, including pieces that used bits of recorded speech turned into music.” – The New York Times

“Researchers from University College London (UCL) found that people who engaged in the arts more frequently — every few months or more — had a 31% lower risk of dying early when compared to those who didn’t. Even going to the theater or museum once or twice a year was linked with a 14% lower risk.” – CNN

John Foxwell’s research found that 69 percent of authors hear voices of their characters, and 42 percent can enter into dialogue with them. Sixty-five percent say they can act on their own accord. – LitHub

A US Department of Agriculture spokesperson said the Kingdom of Wakanda was added to the list by accident during a staff test. The department’s online tariff tracker hosted a detailed list of goods the two nations apparently traded, including ducks, donkeys and dairy cows. – BBC

The country’s first parliamentary inquiry into its arts funding system concluded the Government should aim to commit at least 1% of its £425bn national budget towards culture. “Public funding of Scotland’s arts and culture will only become sustainable if artists are at the centre of policy and paid the fair wage they deserve.” – Arts Professional

There was a cultural difference between pre-boomer collectors, motivated by “connoisseurship and aesthetic appreciation,” and subsequent generations, who had “more of an awareness of the financial component of art.” As a result, boomer collectors have been less inclined to donate art to museums, either public or private, and lose a leverageable asset. – The New York Times

“In the more than 50 years since its debut, the animated special, directed by Chuck Jones and Ben Washam, has become a holiday classic and turned into a live-action movie, a Broadway musical, an updated animated film and a retailer’s fever dream of pantookas, fuzzle fuzz and fliffer bloofs.” – The New York Times

Good listening is not a matter of technique but of having the willingness to enter into another person’s life. Many bad listeners can’t be there for someone else because they are too locked into themselves. For them, everything has to be filtered through their own experience and concerns. – The New York Times

Like many of us today, the Soviet leaders misunderstood what humour is and what it actually does for people. Telling a joke about something is not the same as either condemning or endorsing it. More often, it can simply help people point out and cope with difficult or frightening situations – allowing them not to feel stupid, powerless or isolated. In fact, something the Stalinist regime failed to appreciate was that, because telling jokes could provide temporary relief from the pressures of daily life, in reality it often enabled Soviet citizens to do exactly what the regime expected of them: to keep calm and carry on. – Aeon

“Mexican muralism taught her the importance of expressing a political and social consciousness, but she softened the militancy that was common in the post-revolutionary era. In allegorical paintings, prints and murals with a subtle yet richly colorful palette, Ms. Lazo celebrated Mesoamerican cultures, especially the Maya, and the spiritual abundance of the natural world.” – The New York Times

We shouldn’t be surprised that Rieu is a box office sensation. In an era when, we are told, nobody sells DVDs and CDs anymore, Rieu has sold more than 40 million of them. Last year, the Dutch violinist and conductor sold more than 700,000 tickets to his concerts, bringing in $55.9 million (€50.6m) from 71 shows. It’s an impressive haul for someone who has seldom been the beneficiary of media hype. – Irish Times

Alexis Soloski: “These post-curtain moments have less to do with telling the story and more with telling the audience how to feel about the story they have just seen and what they should tell their friends. As someone who loves a Broadway musical, but is often ready to scurry up the aisle once that musical nears the three-hour mark, I spoke to some of the creators behind eight current musicals to discover how and why each of them had built in an encore.” – The New York Times

Conservators working on the five lower central panels discovered that the Van Eyck brothers’ original work had been painted over as early as the mid-16th century; removal of those additions (as well as the centuries’ accumulated grime) uncovered an unsuspected level of naturalism. Says the project’s head, “Botanists can actually identify every plant in there. The ones that couldn’t be identified — those were overpaintings.” – The Art Newspaper

“The House approved a $1.4-trillion spending package on Tuesday that includes a $7.25-million increase for the National Endowment for the Arts (NEA). This increase is the largest for the NEA since 2013 and brings the organization’s total funding to $162.25 million, its highest since 2010. The spending bills will also increase funding for the National Endowment for the Humanities, the Institute for Museum and Library Services, and the Corporation for Public Broadcasting. The House spending package, comprising two bills, now heads to the Senate, which is expected to approve both bills.” – Artsy

About 1 million Netflix subscribers made the switch last month, following the Nov. 12 Disney+ launch, according to survey results released Wednesday by brokerage Cowen & Co. The firm estimated that 6% of Netflix subscribers who signed up for Disney+ canceled their Netflix memberships after doing so. Cowen based its estimates on its survey of about 2,500 people. – Los Angeles Times

Laura Cappelle: “When this newspaper came up with the idea of sending an unsuspecting foreigner to a series of pantos, I wondered how different it could really be from family-friendly entertainment elsewhere. Reader, it is very different.” – The Guardian

Mrs. T, who is a very private person (that’s why I refer to her as “Mrs. T” in this space) and thus has been reluctant to be entirely frank about her illness in public, decided last night that it is time at last for me to start writing with complete candor about the increasingly desperate state of her health. So … here goes. – Terry Teachout

“Something that has increasingly bothered me over 20 years as a practitioner and educator, is that “music education” as we conceive it (right down to state/county/national syllabi/standards) is not really for everyone, even if it’s supposed to be. … [Anna] Bull’s Class, Control, and Classical Music is a book for our time, especially for those of us who went through classical music training (even just school-age instrumental lessons or choir/chorus rehearsals), loved or loathed it, and would like to point a critical lens to that part of our lives.” – James Humberstone

“A new exhibition at the Museum of History and Industry in Seattle offers a window into how the tech giant hopes to fuse art and AR for the public good.” – artnet 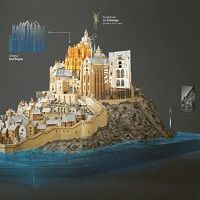