The Master of the Choristers at England’s Chapel Royal had the legal right to travel the land in search of the most talented young men and take them away to London to sing at the monarch’s religious services. This was, of course, a situation ripe for abuse, and in the days of Elizabeth I, Master Nathaniel Giles would conscript boys for his pal Henry Evans’s acting company at the Blackfriars Theatre — or they’d split the bribes from parents desperate to keep their families together. Then, one day in 1600, they chose the wrong target. – JSTOR Daily

“The way Ian Urbina tells it, musicians and journalists are both storytellers — one using sound, the other leveraging words. That kindred connection is part of what led the 48-year-old to launch, about a year ago, his venture The Outlaw Ocean Music Project. As of early November 2020, over 400 musicians from more than 60 countries have translated his stories into music that is heard by millions globally on more than 200 music streaming platforms, including Spotify and Pandora, according to Urbina.” – San Francisco Classical Voice

Les Ballets Trockadero de Monte Carlo, as skillful as its members are, basically performs affectionate parodies of classical ballet, and the dancers all have drag names (including the ones taking male roles). The men in the new San Francisco troupe Ballet22 may sometimes wear tutus, but they dance as themselves and the choreography is serious. – San Francisco Chronicle

In Canada, the most trail-blazing contemporary nonfiction is being produced by writers of colour and Indigenous writers, many of whom are women or nonbinary. – The Walrus

“The departure of McKeen, one of the city’s most prominent arts leaders, comes as something of a shock. He’d been OCT’s managing director since 2008. Before that he spent several years as a grant writer and fundraising consultant for several Portland arts organizations, served a year as the first manager of the Oregon Cultural Trust, and spent three years as general manager of Portland Center Stage.” – Oregon Arts Watch

Authorities seized the trove, which includes coins and jewelry from ancient Rome, bracelets and similar items from the Bronze and Iron Ages, and metal objects from the European Middle Ages, from a Frenchman in Belgium who claims he had found the objects in his apple orchard. Customs officials in both countries say they were probably smuggled from France. – Artnet

“I remember being the “concertmistress” of my youth orchestra and the vague embarrassment over the name. It was an honor that put me in front of everyone, but I couldn’t quite figure out why the “mistress” thing felt weird. I mean isn’t “concertmistress” simply the female version of “concertmaster”? Honestly, it really doesn’t convey the same sense of authority.” – Violinist.com

“There are decades when nothing happens; and there are weeks when decades happen,” Vladimir Lenin supposedly observed. It can sound profound and ominous when you read it the first time, but when three books on the coronavirus crisis all quote the same line, it reflects something between an intellectual consensus and a lack of imagination. Still, in the authors’ telling, the crisis didn’t just compress decades of history into 2020; it was also decades in the making.” – Washington Post

There’s a reason (beyond who’s paying whom), but it’s not easy for restaurant owners dealing with another shutdown and little relief to enjoy seeing film shoots near their closed dining facilities. On sets, it’s all about tracking, tracing, and control. – LAist

That’s right, an astronaut. Italian and other Catholic media have not been kind. But, says a ceramics teacher from Castelli, Abruzzo, where the original crèche figures were made: “It is rich in symbols and signifiers that offer a non-traditional reading of the Nativity scene.” – Hyperallergic

A show with 121 episodes? Sure. What’s going to interrupt you – your baking plans? In addition, of course, there’s the comfort-watch of familiar characters like the cast of Friends or Living Single. Then there’s the pleasant idea of things changing. “Character-driven shows about crime soon became my balm for the unrelenting sameness of daily life. These worlds follow a consistent storytelling logic. The plot changes as time moves along, and time—unlike in real life—always moves along.” – The Atlantic

Not so easy this year. “‘It’s the least festive I’ve ever felt in my life,’ Ashley says, of writing A Surprise Christmas Wedding amid the gloom of 2020. ‘Every word was a struggle.'” – The Guardian (UK)

Givers might favor the beautiful and dramatic because they think about gifts in the abstract: “What’s a good gift?” Recipients, in contrast, imagine themselves using it, and so focus more on utility. – The New York Times

Trump has been a singular challenge for writers in the late-night landscape. An obvious target as a candidate—with his verbal gaffes, body language, and appearance contributing to facile impressions and shallow punchlines—he killed the joke when he won the White House. As president, he placed traditional late-night shows in “a rock-and-a-hard-place situation. – The Atlantic

“We are all here because we believe in the power of theatre, right? We think it has the power to change minds, to catalyze conversations, to shift narratives. But we most often limit that to what’s on our stages, with the goal that our mostly wealthy, mostly white patrons might see our groundbreaking show and say, “Wow, I never knew that.” But if we approached theatremaking as cultural workers, we wouldn’t be measuring success only by the number of tickets sold, and our programming choices wouldn’t be driven primarily by the institution’s need to sustain itself.” – American Theatre

In its revamped form, Spiegel & Grau will produce 15 to 20 books a year, as well as original audiobooks and podcasts. It will also work on television and film adaptations and already has signed a first-look deal with Amazon Studios to develop projects from its titles. – The New York Times

The author of The Man Without Qualities worked in the theaters of Vienna as both critic and playwright. Author Genese Grill looks at how Musil’s two completed plays fed his most famous novel. – Literary Hub

Meeting culture in the middle meant Armstrong could change things from within. The list of firsts he oversaw is staggering. Knockin’ a Jug, which featured black and white musicians, was one of the US’s first integrated recordings. That same year, he cut the first integrated vocal duet, Rockin’ Chair, with white singer Hoagy Carmichael. Black and Blue, a 1929 B-side on Okeh Records’ “popular music” listings (a label that had previously marketed him for “race records”), has been called American music’s first bona fideprotest song against racial inequality. – The Guardian

“From strips of mulberry tree bark, she produced an intricate vase. To make a stout bowl, she folded hunks of poplar bark. She once wove a basket on a loom with lichen. She also created sculptures from wood, like a hollowed-out oak tree she encased with apple suckers and a work featuring branches of cherry and paulownia linked together like a necklace with glass and wire.” – The New York Times

“The art of dance is distinct in being the single art in which the body is the most easily decontextualized from the surrounding work—in order to be consumed as if it existed in and for itself. Yet, in the present controversies that swirl about nineteenth-century ballet classics such as La Bayadère, those which display the racial stereotypes of Orientalism, the problem is more complex than that of bodies alone.” – MassReview

“This week, The New Yorker attached its own extraordinary editor’s note to a National Magazine Award–winning 2018 article by staff writer and novelist Elif Batuman about Japan’s so-called rent-a-family industry, in which desperate and lonely people hire actors to play their absent fathers, wives, children, and so on. The New Yorker reported that three central figures in the story had ‘made false biographical claims to Batuman and to a fact checker,’ undermining the veracity of large swathes of the article and revealing this particular rent-a-family business to be something of a scam.” Ryu Spaeth looks into how and why this could have happened. – The New Republic

“While musicians at some major ensembles, including the New York Philharmonic and the Boston Symphony Orchestra, have agreed to steep cuts that would have been unthinkable in normal times, others are resisting. Some unions fear that the concessions being sought could outlast the pandemic, and reset the balance of power between management and labor.” – The New York Times

“Crowds of listeners gathering in front of crowds of musicians has been all but impossible, so ensembles have rushed to replace in-person performances with online programs — often well produced and sometimes more daring than the live concerts that had originally been planned. In the process, media departments, now much more than promotional supplements, have been the linchpins.” – The New York Times

“Adventure on a Bad Night,” brought to print by the magazine The Strand, “shows a microcosm of the racism and sexism in US society through a dissatisfied woman’s trip to a corner shop … [where] a pregnant immigrant … is being verbally abused by a shop clerk after asking for help.” – The Guardian

“On Thursday, the French Senate blocked a bill that would bring 26 statues back to Benin and a sword from West Africa to Senegal. Then, the National Assembly, which has the power to rule on matters on which the Senate cannot reach a consensus, decided that the plan must move forward, putting France on track to repatriate the objects within a year.” This after the Senate unanimously approved the plan last month. – ARTnews 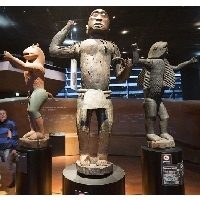