“In 1957, Ross Bagdasarian had an idea. … The story goes that [he] was down to his last $200 when he took a chance on purchasing a fancy tape recorder — one that could change the speed of the recording — for his songs. Playing around with the settings, he stumbled upon a technique that would change his life.” And, in a way, America’s. — Tedium

At what point does a social dance become so normalized, that no one flinches to see it? Because individual movements can’t be copyrighted, it’s not like they have an expiry date (like music) when they slip into the public domain.  With today’s rapidly evolving technology, where things are easily sharable and monetizable, it might be time to revamp the Copyright Office’s laws for individual dance moves. – Dance Magazine

Chad Cooper, a 45-year-old former managing director at Deutsche Bank in New York, left that lucrative job to become executive director of the conservatory, 121 years old but at that point nearly insolvent. And he seems to have rescued the BCM, which brings the only music lessons available to hundreds of public school students and provides music therapy to 1,500 clients, including seniors with dementia and children with autism. — Fast Company

According to the 2018 Americans for the Arts report, “40% of Americans believe that the White House is not spending enough on nonprofit arts organizations. A majority of Americans (53%) also approve of doubling the federal government’s funding to these organizations and generally financing the arts (65%).” — Hyperallergic

The teen rom-com, that is, revived by Netflix and Love, Simon to incorporate old tropes and new characters – including a Korean American nerd, a gay boy on the cusp of coming out, and a fat girl not as punchlines but as the protagonists of their own love stories. – BuzzFeed

The mural, by Brooklyn artist Beau Stanton, features Ava Gardner with a radiating starburst behind her head. And in a 16-page letter sent to the LA Unified School District last month, a neighborhood coalition president objected strenuously to the starburst as a symbol of Imperial Japan. The Times‘ art critic: “Given the motif’s architectural roots in Art Deco design, the prominence of stylized light beams in nostalgic wall murals is hardly surprising.” – Los Angeles Times

All told, the five men allegedly stole more than 25,000 digital files, including feature films, trailers, TV episodes and audio tracks, which they stored on a server in France, according to U.S. officials. The crime ring also allegedly operated a website called “BollyTNT” used to distribute pirated Bollywood films. – Variety

We think we’ve learned not to overlook outsiders. Yet the orchestral scene today remains in thrall to safety. It favours those who’ve studied with the right people, at the right schools and universities and have the right profile and publishers. Composing in the approved idioms is always preferred over something more raw, exploratory, problematic or new. Look at the recent major orchestral commissions, or the annual Proms new music programme. – The Guardian

The Good Chance Theatre was founded in the Calais refugee settlement known as “The Jungle,” where the touring piece by that title was created. Now that the Calais camp is gone, Good Chance has moved on to Paris, where, each week, migrants attend a workshop and create a theatre piece which they perform for visiting Parisians. Writer Verity Healey has a look. — HowlRound

The ideal upon which the University of Wisconsin was founded and expanded was not merely to train workers, but to “search for truth … [and] improv[e] the human condition,” ultimately reaching every family in the state. Reporter Adam Harris looks into the current state government’s attempts to change that idea, which is leading to budget cuts and the elimination of liberal arts majors. — The Atlantic

“The vast majority of assets and growth lie with a relative few of the largest stations. Every year, the weakest go dark, or they are absorbed. … Or their licenses are spun off for cash. … If this continues, the consequences are profound. So how shall we think about this?” Spokane Public Radio general manager Cary Boyce offers three possibilities. — Current

The institution, called Ocean Space and housed in a newly-restored historic church, will host workshops and lectures and “will also showcase the digital archive of oceanic projects organized in the last seven years by TBA21-Academy, a department of Thyssen-Bornemisza Art Contemporary (TBA21).” — The New York Times

Continuing its recovery from the crises of a few years ago, the DSO announced its sixth balanced budget in a row. Box office revenue rose by 1%, the popular neighborhood concerts were renewed for five more years, and the “Live from Orchestra Hall” webcasts were seen by 400,000 people. — Detroit News

Since 1986, the Hall has added 323 inductees to its rolls; they include 220 performers, 33 “early influencers” (a category largely composed of rock and roll’s African-American founding mothers and fathers, such as Lead Belly, Robert Johnson and Sister Rosetta Tharpe) and 34 non-performers (generally music-industry executives, but also songwriters, producers and instrument makers). – NPR

It is a rare thing when a book comes along that looks as magnificent as Jürgen Ploog’s Flesh Film and reads like an hallucination. — Jan Herman

“The first issue was published 25 years ago this month and distributed in bathroom stalls at the Metropolitan Opera. Now its writers are credentialed press at the Met.” Joshua Barone looks at the history of Parterre Box and talks to its founder and doyenne, James Jorden (aka La Cieca). — The New York Times

Gambling mogul David Walsh, who built and opened MONA (Museum of Old and New Art) in Hobart in 2011, has announced plans for a complex he’s calling Motown. In addition to 176 high-end hotel rooms, Motown will include a 1,000-seat theatre, a conference center, a library, a gallery, and a spa designed by no less than James Turrell and Marina Abramović. — The Art Newspaper 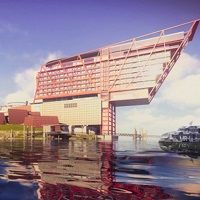