Mark Swed: “Last week there happened to be something remarkable: two different (and they couldn’t have been more different) performances of Handel’s oratorio oriented around the one percent – the top and bottom one percent, that is.”

“Lucas’s titanic achievement is even more stunning when you consider his modest roots: he is from, ironically, Modesto, a small city in northern California where his dad owned a stationery store that he expected his son to take over. The taciturn young Lucas had other ideas, heading to film school at the University of Southern California (USC) where he fell in with a new generation of cineastes — among them, Steven Spielberg and Francis Ford Coppola — who would be his co-conspirators in the takedown of the old Hollywood order.”

“For years now, some of the best, wildest, most moving or revealing stories we’ve been telling ourselves have come not from books, movies or TV, but from video games. So we’re starting an occasional series, Reading The Game, in which we take a look at some of these games from a literary perspective.” Exhibit A: Mo Man’s Sky.

Russell Tovey: “For so long, as a young actor, I had this anxiety about making sure I could get straight roles, and now I know that’s not necessary. The gay roles are the best for me. Being gay has made my career.”

“That, more or less, is what happened to Thaddée Prate, director of old master pictures at the Tajan auction house [in Paris] … In March, Mr. Prate recalled being ‘in a bit of a rush’ when a retired doctor visited Tajan with 14 unframed drawings that had been collected by his bibliophile father.”

The out-going director of the Tate museums will receive the $25,000 Audrey Irmas Award for Curatorial Excellence, given by Bard College’s Center for Curatorial Studies based on a poll of art professionals.

Her mushroom drawings hang in the Science Museum in London. “These drawings, most of them from the 1890s, are so accurate that even today, they are still consulted by scientists.”

A gift the organizations didn’t expect or look for, from a patron who had attended many private ballet functions and climbed the Great Wall with the dancers when they went to China, surprises – and helps – the Sacramento Ballet .

The writer, who battled alcoholism in his 20s but emerged one of the most elegant writers in the language, announced last month that he had cancer – and used his final column to rail at the British National Health System.

Will Google, Microsoft, Amazon, or something entirely new win this round of understanding how humans speak naturally? (It’s a big deal because real artificial intelligence depends on this point. Oh, and the machines are always listening.)

Yes, and it’s because theatres are different venues from comedy clubs. One comedian: “There are some parts of [my show] that are very emotional just for the sake of being open, honest, and vulnerable onstage. … I don’t know that that’s a quality that can fly in a stand-up club that has a two drink minimum, where people are there for a night out to laugh and you have to make them laugh.”

Here are five lessons, including the perhaps obvious pop singers aren’t Broadway singers, and they don’t show up well next to talent like Audra McDonald and Kelli O’Hara (but! They bring viewers!).

The thing about Brasilia is that it’s so carefully planned and geometric that it’s hard to find the place where people meet up. One photographer, originally from a rural town, figured out where to find everyone: The central transport station.

Ticket bots are the scourge of the live performance business. For popular shows, automated ticket purchasing programs buy up all the tickets within moments of them becoming available, then scalp them for a profit. For really popular shows, the scalping prices (er…secondary market prices) can be several multiples higher than the face value. This all but ensures that only the wealthy can afford to buy. Since the shows themselves don’t make any extra from the scalper sales, the scalpers take the profits. The only ones who benefit are rich ticket-buyers who can afford the higher prices. Lin Manuel-Miranda says the bots will ruin Broadway and has been campaigning for legislation to outlaw bots.

Now he’s got it, as the US Congress has passed legislation to ban bots from circumventing

…the security measures of ticketing websites, which bots often do, and would give enforcement authority to the Federal Trade Commission… Ticketmaster has estimated that bots have been used to buy 60 percent of the most desirable tickets to many shows.

But in a fight between legislation and technology, you can usually bet on technology finding ways around the rules.

The world of bots is shadowy and little understood, with much of the software being developed and even operated overseas, complicating enforcement. And there is an enormous incentive for scalping, which is legal and now largely integrated into the mainstream concert business through sites like StubHub and even Ticketmaster.

So what’s the solution? Aside from banning scalping altogether, there will be abuses, and that’s not likely.

While few spoke against the BOTS Act — the National Association of Ticket Brokers, which bars bots among its members, welcomed the bill — ticket scalping has become a standard part of the entertainment economy, and services like StubHub are often welcomed by fans for their convenience. Economists frequently endorse secondary markets as a true demonstration of supply and demand.

The news as it happens … and then collected after it happens. (We’ll post some analysis articles tomorrow.)

Adrian Gill would have been pleased and amused by the way his too-early death, aged only 62, has been noticed. It was repeatedly announced in the national BBC radio and … read more

Dancing Toward a Future

Robert Rauschenberg Retroactive II 1964, Museum of Contemporary Art (Chicago)   Though London is in pre-Christmas gridlock, making it difficult to go anywhere that can’t be reached on foot, there are some important shows to … read more

The weekend is a good time to consider music that the Rifftides staff has ignored, overlooked or allowed to languish among the burgeoning boxes of incoming CDs. Keeping up isn’t hard to do; it’s … read more

On Facebook and Twitter I’ve been talking about bad graphic design in classical music. Why does bad design matter? Because we need a new audience. Our new audience comes — will come — from the … read more

The proposed changes, including a central pavilion that features Mark Rothko’s work, are logical to fix the confusing layout of the museum and enhance it as well. But “to reach its $75 million total goal, it must crack Oregon’s historic stinginess about making large contributions to the arts.”

In the 50th anniversary of the St. Louis Repertory Theatre, one actor notches his 100th role for the theatre with a few weeks as Marley’s ghost. How the hell did the man do that while playing roles at other theatres around town – and spending eight seasons in Cincinnati? (The answer lies in the name of the company.)

It’s the first film directed by a woman to win best film – and she won best director and best writer as well, beating Ken Loach and Pedro Almodovar, among other strong contenders. What does this presage for the Oscars?

“A study in 2010 determined that the altarpiece needed conservation – to remove varnish and to adjust the colours of older retouches. A €1.3m grant followed and now – with the restoration one-third complete – the discoveries are astonishing, casting light on a touching story of fraternal love and admiration.” 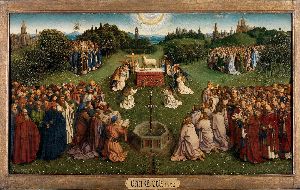