“This proposal would eliminate cultural diversity, which stems from freedom — which means artists are not kept on a political leash,” Budapest mayor Gergely Karacsony said. The Hungarian Theatre Society also issued a statement saying the plan would curtail artistic freedoms in an unacceptable way. – Reuters

“Ana Subeliani arrived at the film premiere for And Then We Danced by foot, but left in an ambulance, blood running down her face. … Before screenings in November, far-right protesters and members of the Georgian Orthodox Church, some holding religious icons aloft, tried to stop moviegoers entering theaters” screening the film, which depicts a romance between two male members of the country’s national dance troupe. – The New York Times

“Jonty Bravery, who turned 18 in October, … told the police he had to prove a point ‘to every idiot’ who said he had no mental health problems … As well as having an autistic spectrum disorder, Bravery has an obsessive compulsive disorder and is likely to have a personality disorder.” – The Guardian

There’s dance, but then there are podcasts, and then there’s the international dance film festival as well. – Dallas Morning News

Pen Parentis has lasted for more than a decade in a literary world that is decidedly unfriendly to working parents. “‘The way you hear it is in the people who don’t have kids and when you say, ‘We run this thing for parents,’ they say, ‘I’m too dedicated to my career; I could never have kids.’ … And that, to me, as a parent, makes me feel like someone who’s not as dedicated to my career because I decided to have kids, which is wrong.” – Literary Hub

Lisa Taddeo thinks her success is partially luck, and partially that she really digs into the nuances of women’s desire, and their relationships with men, at least before the Weinstein scandal broke. – The Guardian (UK)

This isn’t the why, but a result: “Guy Williams and his fellow visual-effects artists have spent so much time staring at Will Smith’s face, they’ve practically memorized his every pore. ‘We joke sometimes that we probably know his face better than his wife does,’ Williams told me in September, laughing. ‘I can tell you exactly how he forms a smile. I can even tell you the 12 different flavors of Will Smith’s smile and the subtleties of each one. It gets pretty obnoxious.'” Indeed. – The Atlantic

Talking NY Phil: “I’d wish for less attention and money to be squandered on overhauling the hall and more on improving the mix of musicians (guest soloists and visiting conductors) and on reimagining the programing, to make it more innovative and eclectic.” – Lee Rosenbaum

Leibman won a Tony Award for his portrayal of Roy Cohn in the 1993 Broadway production of Angels in America. At that point, he had Drama Desk Awards and an Emmy, but it was as Cohn that his reputation grew. “So striking was Mr. Leibman’s portrayal that no less an actor than F. Murray Abraham, an Oscar winner, found him a hard act to follow when he took over as Cohn in 1994.” – The New York Times

Grant said in one candidate’s video, “I, for the first time in my life, am getting active politically, because I think that the country is on the edge of a true abyss.” He’s campaigning strategically, to block Boris Johnson’s majority. “He described what he said would be ‘the catastrophe of a no-deal Brexit’ under Mr. Johnson.” – The New York Times

In the early 20th century, Spiritualism was at its peak, and so were fake psychics who fleeced people who just wanted to communicate with a dead loved one. Into the breech between weird and real stepped Rose Mackenberg, who “investigated more than 300 psychics and seers in the two years she worked for Houdini and many more after that. In a career that lasted decades and led her to testify before Congress, she proved to be quick-witted, adept with disguises and unblinkingly skeptical.” – The New York Times

LA’s MOCA employees now won’t need to go through additional certifying steps – or employer “education” either. MOCA Director Klaus Biesenbach said recognizing the union was “in full alignment with this vision we have set forth for our institution. Ultimately, we’re taking this step to come together as one team, one MOCA.” – Los Angeles Times

Peter Englund, the former permanent secretary for the Swedish Academy and a current member, said, ““To celebrate Peter Handke’s Nobel prize would be gross hypocrisy on my part” He is the only current member of the Academy with firsthand experience in Bosnia, according to a journalist, and Handke’s win has been met with horror by “politicians and writers lining up to condemn his denial of Serb atrocities during the war in the former Yugoslavia, as well as his presence at the funeral of war criminal Slobodan Miloševic.” – The Guardian (UK)

The styling is in the ties. And there are … let’s say a lot of different ties in this movie. Says one of the costume designers, “The language of how the tie greets the shirt greets the belt; the cut of the suit and how that translates across the years for each of these men, that was a real joy for me.” – The New York Times

Rachel Brosnahan, who plays Midge Maisel, says that season three changed things for her – and made the actor a better comedian too. “While the first and second season, most of the major stand-up was born out of something she was experiencing in her real life in real time, this new season takes me on the road. She’s a working comic now. And she’s having to learn to be a technically better comic, to write tighter jokes, to write jokes for different audiences who won’t necessarily understand or relate to what’s going on in her life.””- Los Angeles Times

That desire for usefulness has always been a knotty issue for performance art, since it is often both accessible (live and affordable) and inaccessible (challenging and unfamiliar). Intimacy and ritual seem to be buzzwords in the poetry and art world at the moment. – Times Literary Supplement

We can’t escape the question of what matters and why: the way we’re living is itself our implicit answer to that question. A large part of a philosophical training is to make those implicit answers explicit, and then to examine them rigorously. – Aeon

As many countries have continued to cut funding for the arts, Canada’s government has gone the other way and embraced culture and the idea of getting it seen around the world. Had the Liberal party lost in Canada’s October elections, a different attitude may have been taken by the country’s politicians. Instead a great deal of optimism has been generated through Canada Council for the Arts’ commitment to sending domestic work abroad. – The Stage

“The closure of almost a fifth of the UK’s libraries over the last 10 years comes against a backdrop of a 29.6% decline in spend … since the Conservative government implemented austerity in 2010.” The number of paid librarians and other staffers has fallen by more than one-third in the same period. – The Guardian

Bess Rothenberg, senior director of strategy and learning at the Ford Foundation: “The scale and momentum of the #MeToo movement compelled the Ford Foundation to take a long, hard look in the mirror. What should be our role in responding to abuses of power within the organizations we support? In preventing them? Had we been doing enough?” – Stanford Social Innovation Review 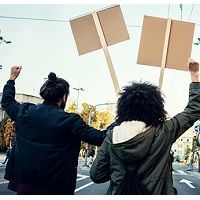