Science in the 2010s became more global and collaborative than ever before. These days, major breakthroughs are likelier to come from groups of 3,000 scientists than groups of three. – National Geographic

And that opera, Le Dernier Sorcier (The Last Sorcerer), was composed by a woman — Pauline Viardot, remembered mostly for being one of the century’s great mezzos. Amy Lorette Damron Kyle, a musicologist at the Sorbonne and a singer herself, compares Viardot’s Sorcier to one of opera’s classic passive princess/wicked queen stories, Mozart’s The Magic Flute. – The Conversation

“In classrooms and daily conversations, young people are changing the way they speak and write — replacing the masculine ‘o’ or the feminine ‘a’ with the gender-neutral ‘e’ in certain words — in order to change what they see as a deeply gendered culture.” – The Washington Post

These ten museums opened in 2019. We’re not saying they’re the best, but they sure are fun buildings to look at. – Dezeen

“I’m a politically minded person and have spent a lot of time thinking about poverty and income inequality. The idea of tackling this subject matter in the context of a symphony orchestra, which optically tends to be perceived as an institution that caters to people of privilege … I didn’t know exactly how to attack it. What I did was to treat homelessness and housing insecurity as symptoms of broader systemic inequality, and to try to implicate the audience in the story that I was telling and to really kind of hold their feet to the fire.” – Portland Mercury

“I am deeply grateful for the work in Potter and indeed Downton, but it wasn’t what you’d call satisfying. I didn’t really feel I was acting in those things.” – The Guardian

That’s not about radical parents or radical kids – it’s about changing theatre at its roots to reflect the reality of working parents in the industry. Not surprisingly, parents have some ideas, some practice, and some means-tested ways to get theatre much more integrated into the lives of parents and kids (and vice versa). – HowlRound

“In the future, we can expect computers to produce literature different from anything we could possibly conceive of. Our instinct is to try to make sense of it if we can. But when a new form of writing appears, generated by sophisticated machines, we may not be able to. As we learn to appreciate it, perhaps we will even come to prefer machine-generated literature.” – Nautilus

The hidden moments of reclaimed freedom that make any job bearable are being discovered and wiped out by bosses everywhere: That trick you used to use to slow down the machine won’t work anymore; or that window of 23 minutes when you knew your boss couldn’t watch you is vanishing. Whatever little piece of humanity survived in these fragments dies with them.  – The New Republic

Camus had sided publicly with the Hungarian uprising since autumn 1956, and was highly critical of Soviet actions. He also publicly praised and supported the Russian author Boris Pasternak, who was seen as anti-Soviet. – The Guardian

For English-speaking creative teams, there are obvious benefits to opening in Paris. The market is far less crowded than in New York or London, and star casting isn’t much of a factor, since most musical theater performers are unknown to the French audience. – The New York Times

“It took five years of active persuading, plus nearly two decades of water under the proverbial bridge, before choreographer Donald Byrd finally agreed to resurrect The Harlem Nutcracker. Instantly loved after its 1996 New York premiere, his Nutcracker was financially doomed by 2001 — and left some scars on its way out.” But this year, firmly ensconced at Seattle’s Spectrum Dance Theater, Byrd is at last ready to return to it. – The Seattle Times

“Eun Sun Kim, the South Korean conductor who made a powerful San Francisco Opera debut in June leading Dvořák’s Rusalka, has been named the company’s next music director. She will be just the fourth person to occupy the position in the company’s nearly 100-year history, and the only Asian woman to hold an artistic leadership role with a major North American opera company.” – San Francisco Chronicle

The 72-year-old public radio and network television veteran has been alongside creator Jad Abumrad at the center of the popular podcast/radio series for 15 years. “No end date has been announced, with Krulwich hinting to one episode being finalized for ‘next week’ and an eventual super-sized episode about ‘a world population puzzle’ as his remaining Radiolab duties.” – Ars Technica

“[The 42-year-old] was dismissed Thursday by two of the world’s most prestigious houses: the Royal Opera in London and New York’s Metropolitan Opera. His firing comes after an investigation by the Royal Opera, which determined that he had demonstrated ‘inappropriate and aggressive behavior‘ during an RO tour of Japan in September.” – NPR

“[Porgy and Bess], which opened the season in September, was scheduled to return on Jan. 8 for seven performances, through Feb. 1. On Thursday, the Met announced it would add three more, on Feb. 4, 12 and 15. Big repertory companies, which plan their crowded schedules years in advance, rarely have the flexibility to add performances to even their most successful shows. But the Met had an unexpected hole in its schedule.” – The New York Times

“The Arts, already an addendum to the Department of Communications and the Arts, will be merged along with the rest of the department into a new one with the unwieldy title of the Department of Infrastructure, Transport, Regional Development and Communications.” What’s more, Prime Minister Scott Morrison did not consult department head Mike Mrdak — and only notified him the afternoon before the announcement. – Limelight (Australia)

Richard Kostelanetz has produced many titles in his Archae Editions line of books over the past eight years via Amazon’s print-on-demand publishing service. But a few weeks ago they suddenly disappeared from the Amazon site. … – Jan Herman

Phil Kennicott: “The artists’ appeal, and the jury’s willingness to grant it, says a lot about the kind of art these particular artists make, which is political, documentary, socially engaged and deeply intertwined with activism. This wasn’t just about refusing the idea that one of them take home the 25,000 pound first prize while the other three received the 5,000 pound finalist awards. Rather, it was about giving one social concern priority over the others.” – Washington Post

“For millennia, Indigenous Australian communities have been passing down histories, knowledge, language and customs, largely through oral storytelling. But in a world of digital addiction, where even the most remote parts of the country are being infiltrated by smartphones, telling stories via screens is the new necessary: a way to both preserve tradition and reach out to the young.” – The Guardian

“Marie and Franz have a new guest at their Christmas Eve party this year. Emma Lookatch and Larke Johnson, both dancers in the Adaptive Dance Program at Joffrey Academy of Dance: Official School of The Joffrey Ballet, are alternating in the new role of Worker Girl. It is a permanent part created specifically for students with disabilities in Christopher Wheeldon’s version of The Nutcracker at The Joffrey Ballet.” – Dance Magazine

MoMA’s endorsement of unending growth is central to the advancement of corporate values that lie at the heart of the existential crisis facing not just it and countless other cultural institutions, but the planet itself. For more than two decades, MoMA has been in a perpetual state of aggrandizement to anticipate the imagined needs of the twenty-first century and future generations yet unborn. – New York Review of Books

Mainstream economists nowadays might not be particularly good at predicting financial crashes, facilitating general prosperity, or coming up with models for preventing climate change, but when it comes to establishing themselves in positions of intellectual authority, unaffected by such failings, their success is unparalleled. – New York Review of Books 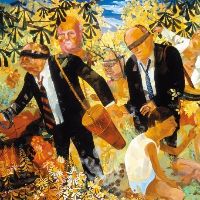