Back Before Valentino, One Of Cinema’s First Heartthrobs Was Asian-American
“America’s teenage girls and swooning housewives fell for his charms, but French intellectuals like the novelist Colette and Polish-born filmmaker Jean Epstein sang his praises too. … If People magazine had existed during the late 1910s, [Sessue] Hayakawa would have undoubtedly been declared the ‘Sexiest Man Alive.'”

How the British troupe Forced Entertainment dreamed up and put together Table Top Shakespeare, in which solo actors perform each of his plays, using the likes of a can of beans, a bottle of bleach, and a cheese grater to represent the characters. And no, it’s not (or not merely) a gag.

“Dozens of local artists were abruptly evicted Monday from their work spaces at the Bell Foundry building in the city’s Station North Arts District after city officials said they discovered a variety of safety violations in the two-story hub of theater, art and recording studios. The move … came days after a fire in an Oakland, Calif., warehouse used for art studios killed at least 36 people, a reality not lost on many tenants and supporters of the community workspace.” (includes video)

“Since the early 1980s schools have become ever more captivated by the idea that students must learn a set of generalised thinking skills to flourish in the contemporary world – and especially in the contemporary job market. Variously called ‘21st-century learning skills’ or ‘critical thinking’, the aim is to equip students with a set of general problem-solving approaches that can be applied to any given domain; these are lauded by business leaders as an essential set of dispositions for the 21st century. Naturally, we want children and graduates to have a set of all-purpose cognitive tools with which to navigate their way through the world. It’s a shame, then, that we’ve failed to apply any critical thinking to the question of whether any such thing can be taught.”

Well, normal for his place and time. What’s more, his buddy Max Brod, notorious womanizer, had them, too, if we can believe his journal.

“Whatever problems you might have with the idea of a Trump administration, it opens up the prospect of a real improvement in American arts policy.”

In the years between the 1925 Paris Exhibition (where the stye became famous) and World War II, Art Deco became as popular in Japan as it did in any other prosperous country. “The cultural hybridity was, in a way, a reversal of the one that emerged in Western Europe in the late-19th century, when Japonism swept through the region, captivating the Impressionists in particular.”

“One positive story the classical music field has to tell is a multi-tiered membership approach developed by The Cleveland Orchestra. Instead of building a one-size fits all membership program, the Cleveland Orchestra team identified distinct audience segments that fell through the cracks of their existing loyalty programs. Then, they went about crafting a targeted membership initiative for each of those groups: college students, young professionals, and “gap audiences” that hadn’t responded to traditional subscription offerings.”

Some of the reaction seems to be Poe’s Law in action (though you’d think the title – Bad Little Children’s Books: KidLit Parodies, Shameless Spoofs, and Offensively Tweaked Covers – would clue folks in), and some seems to be indignant virtue-signaling.

“The 27-year-old Ukrainian … has been cast in two hot upcoming titles: Kenneth Branagh’s all-star adaptation of Murder on the Orient Express and the spy thriller Red Sparrow from Fox, appearing alongside Jennifer Lawrence and Joel Edgerton.”

The auction house has acquired Orion Analytical and is folding the firm into its newly-created scientific research department. James Martin, the firm’s founder (and now a Sotheby’s exec), has helped the FBI in a number of art fraud cases, not least the Knoedler Gallary debacle.

Executive director Andrew Kipe says that the 29-year-old music director has
“really changed the conversation about the orchestra and its mission and direction. He has wanted the orchestra to do more than be in the concert hall giving concerts.”

The artifacts, which range between roughly 1,800 and 2,400 years old, were stored at the Geneva Free Port in 2009-10, before the current Arab civil wars and the rise of ISIS.

Okay – so we don’t quite know how Solange beats out Beyonce’s Lemonade for best album of the year. But the bigger question is how this eclectic hodgepodge of styles and genres gets sorted out into a big list that features Barbara Hannigan, Miranda Lambert, Rihanna, Chopin mazurkas, Kaytranada and Christopher Rouse. Just what is the aesthetic through-line here?

“Under Brown’s leadership, GIA’s membership increased thirty-four percent and the budget was nearly doubled from 2008 to 2017. The organization also saw a large expansion of its programs, including the development of webinars, research, workshops, and forums on a wide array of topics including arts education; support for individual artists; cross-sector creative work in medicine, environment, and corrections; and many more. The 2016 GIA Conference was the largest in the organization’s 32-year history.”

“‘This festival teaches even the little children, artless and simple, to be greedy,’ as one critic put it. ‘The tender minds of the young begin to be impressed with that which is commercial and sordid.’ The year was 400, and the anxious writer was the Cappadocian Bishop Asterius of Amasea.”

“Two years ago, in an essay on the persistence of the Frankfurt School, I wrote, ‘If Adorno were to look upon the cultural landscape of the twenty-first century, he might take grim satisfaction in seeing his fondest fears realized.’ I spoke too soon. His moment of vindication is arriving now.”

“Our findings suggest that those who pursue creativity, and produce significant creative contributions, may benefit from existential security in the face of death,” the researchers conclude. Artists follow their muses for a myriad of reasons, of course. But this research suggests that, whatever their catalyst, doing creative work — and especially getting recognized for it — conveys an invaluable emotional benefit.

What’s more, he’s the author of the play that became the Oscar contender Moonlight – Tarell Alvin McCraney, who himself graduated from Yale’s program just a decade ago.

Just two weeks after the sculptor won the first-ever Hepworth Prize, she’s won Britain’s most famous art honor. And, as with her Hepworth, Marten says she’ll share the Turner money.

Stephen Mooallem, formerly of Harper’s Bazaar and Interview, “said he wanted to improve the paper’s digital side, re-establish its cultural coverage and investigative reporting, and embrace the paper’s inherent ‘New Yorkiness.'”

This is the fourth anniversary of Dave Brubeck’s death at age 91. Under the heading, “Always remembered, never forgotten,”  … read more

The Tempest-Tost Find a Home (at Stratford-upon-Avon)

Wolfgang Muthspiel, Rising Grace (ECM) The Austrian Guitarist Muthspiel is the leader, but he and his sidemen are so wrapped together in the music on Rising Grace that they might have been billed as a … read more
AJBlog: RiffTides Published 2016-12-05

Ottawa’s National Arts Center has spent the past eight years raising $23 million so it could give the money away. Why? The NAC is a performing arts center, a presenter and home to several of the Canadian capital’s biggest arts groups. But it hasn’t been a traditional funder. At a time when arts groups are scrambling to support their own operations, why raise money to fund other artists’ work, particularly when it might never see your own stages?

It’s a brilliant move, actually. There are many ways to have impact in your field. Certainly producing or presenting great work is one of them. But there’s also tremendous power in being a convener of ideas and people, a connector of resources or an investor in work that you like. Engaging in artistic conversations with other artists and institutions outside your own walls broadens and challenges your own work.

How do you build constituency for your aesthetic? The aesthetic you produce on your own stages might not travel much beyond your building, even if it gets critical acclaim. But funding artists and work beyond your own fingertips extends your influence and promotes your ideas. It’s a bold bid for artistic leadership that extends NAC’s reach well beyond Ottawa.

“We’re looking for bold, compelling works that have a strong artistic team, a strong producing partner and ambitions to be national or international,” said Heather Moore, the veteran NAC artistic producer who will run the NAC’s new National Creation Fund. “This is not about the germ of an idea that doesn’t yet have a potential life. We’re talking about filling in that mid-development stage of a project that’s brewing, and that already has somebody intent on putting it on the stage.”

The main idea,NAC president and CEO Peter Herrndorf said, is to put enough cash into the hands of artists to make an exponential difference in artistic outcomes. “We want to get as much of that money into artists’ hands as possible, as quickly as possible,” he said.

“Michelle Dorrance is a new kind of tapper. Classically, tap is a matter of a cool, contained upper body suspended over a huge clatter down below—a contrast that is supposed to be witty and, in a great or even good tapper, is. (“My feet are producing twenty taps a second, in alternating rhythms? Gee, I didn’t notice.”) Dorrance supplies plenty of action in the feet, but meanwhile the rest of the body is all over the place. Her elbows fly out; so do her knees, in great, lay-an-egg squats. She looks like a happy little tomboy vaulting around in a tree. Now and then, she’ll put on the mood-indigo, darkness-in-my-soul expression sometimes seen in tappers, or, alternatively, the Vegas-y let-me-entertain-you expression, but both of them fall off her face pretty fast, because she is fundamentally unaffected.”

Even though Strayed hasn’t written “Dear Sugar” for years, people still ask her questions – one in particular right now being focused on a certain president-elect. Strayed: “I don’t have a crystal ball. … I think sometimes people ask questions not because they even believe there’s an answer but because they want to be heard.”

“Under the umbrella of [his production company] El Deseo, Pedro makes whatever movie he wants. A new one comes out every couple of years, as with Woody Allen, but no two Almodóvar movies are alike. His aesthetic has become harder and harder to pin down. Critics regularly announce that he has finally left behind his taste for gender games and melodramatic plots with murdered spouses, only to have his next movie prove them wrong.” 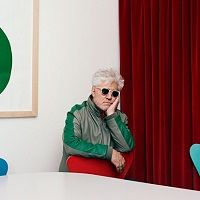