“Even now, 70+ years since John Cage’s seminal Suite for Toy Piano from 1948, the toy piano still feels like Duchamp’s upside-down urinal (Fountain): out of place on stage, it elicits giggles and scoffs, is the star of the show, and at least promises a memorable experience, musical and otherwise.” Yet now there’s an entire concert repertory for the little contraption. – NewMusicBox

“Black opera singers are now cast in a wide range of roles and great operas written by black composers have gained more recognition. Yet, Porgy and Bess has maintained its cultural status as the pinnacle of black opera, despite being written by and composed by white men and women — George and Ira Gershwin and Dubose and Dorthy Heyward. Dr. Jason Oby, the chair of the Department of Music at Texas Southern University and the artistic director for the Houston Ebony Opera Guild, joined The Takeaway to discuss Porgy and Bess and the legacy of black opera singers and composers.” (audio) – WNYC Studios

Unlike mainstream talk therapies, Dance Movement Therapy uses the entire body to approach the client primarily on a non-verbal and creative level. The body in motion is both the medium and the message. DMT recognizes the moving body as the centre of the human experience, and that body and mind are in constant reciprocal interaction. – The Conversation

Big donors have grown and small/medium-size donors have gone away. Empirically, this does not seem to have hurt total giving much in the recent past. However, what happens in the long run? Will bigger and bigger donors continue to bail out philanthropy? Will the elimination of the tax deduction for most former tax itemizers continue to erode household giving? – NonProfit Quarterly

“For the revival of his first professionally produced play, A Bright Room Called Day, open now at New York’s Public Theater, Kushner has in classic Kushnerian style wildly rewritten the script … In so doing, he’s created an impossible play that circles two impossible problems — how the left could have responded to the rise of Hitler, and how art can respond to our present moment — and offers no easy solutions.” – Slate

“From [his chemistry] studies came an idea that he could translate science into art by using polarized light to bring rainbow colors out of transparent plastic shapes. In the late 1960s he used this process to create kinetic, or moving, sculptures. … Over the next 50 years, Mr. Peiperl’s kinetic art would be displayed at the Hirshhorn, Kreeger and other galleries in Washington and at art spaces in New York, Chicago, Philadelphia and in Europe.” – The Washington Post

Of the more than 500 cultural professionals they surveyed, 78% said they were either “somewhat concerned” or “very concerned” about about philanthropic trends. A similar percentage said that the giving strategies for the next generation differed substantially from those of their predecessors. – The Art Newspaper

Don’t call it a name change, though. Museum officials say it is a rebranding that clarifies the missions of the joint institutions. And, they say, it has absolutely nothing to do with international protests over the Sackler family’s connection to the opioid crisis. – Washington Post

For some, buying records is no longer about owning the same piece of music as everyone else but owning a version of it that few others have. It reflects a change in contemporary relationships to owning music, says Sevier. “Owning a limited or special edition is doubling down on the closeness you feel to an album or artist. You can’t display your streaming history like a trophy.” – The Guardian

Increasingly there’s this repeated story in our country where actually a whole lot of people don’t get to profit off of the creative insights that they have. That is totally racially structured. That is totally class-structured. So this connection between race and wealth that I’m trying to establish is that the rules of who gets to profit from what they make are totally unequal. We can see this in [areas] that seem to be as frivolous as the makeup you put on your face or the clothes you put on your body. But it all trickles from this initial system of inequality. – Vox

He lays out two such rules in his new book, Loserthink. His first proposal, which he calls the “48-hour rule,” states that everyone should be given a grace period of a couple of days to retract any controversial statement they’ve made, no questions asked. “We live in a better world if we accept people’s clarifications and we accept their apologies, no matter whether we think—internally—it’s insincere,” he says. His other idea is the “20-year rule,” which states that everyone should be automatically forgiven for any mistakes they made more than two decades ago—with the exception of certain serious crimes. – Wired

Archaeologists using ground-penetrating radar found a big mound carved into a western Norwegian island — along with the remains of a “huge” ship as long as 55 feet, Paasche told The Washington Post, in a discovery that may tell new tales about how the ships evolved to become fearsome and agile vessels more than 1,000 years ago. – Washington Post

Some of Los Angeles’ selling points need to be reset. The idea of endless summers has shifted in the age of climate change. “It Never Rains in Southern California” has morphed into Bad Religion’s “Los Angeles Is Burning.” The carefree allure of rolling down the Ventura Highway used to be a cool thing to sing about. Now the drive is mostly a bumper-to-bumper slog. – Los Angeles Times

Jesse Green: “On the whole, queer art, which fully emerged from the closet in the 1960s and 1970s — around the same time people in great numbers did — has mostly concerned itself with its own moment, as if to say, ‘Here I am.’ … [Yet] another approach has been emerging in tandem. … The watchcry for these works isn’t so much ‘Here I am’ as ‘There we were.’ More trenchantly, they sometimes ask how the two ideas are, or aren’t, related. What is the queer past for?” – T — The New York Times Style Magazine

According to a new report from an international education company that tested 2.3 million volunteers in 100 countries, the level of English as a second language is highest in Northern Europe, Singapore, and South Africa and lowest in the Arab world and parts of Asia. – The Economist

“Garrett helped transform J. Paul Getty’s pet project museum, which the billionaire originally operated out of his own home, into what is now arguably the wealthiest art museum in the world.” – artnet

The abstract artwork, titled Orpheus and Apollo and created by sculptor Richard Lippold specially for Philharmonic Avery Fisher David Geffen Hall when it opened in 1962, was taken down for “maintenance and conservation” in 2014, something that all too few people had noticed. Now Lincoln Center and the Philharmonic have indicated that, when the venue’s reconstruction is completed in 2024, the hanging sculpture won’t be reinstalled “because of current safety standards that impact the wiring.” – Gothamist

“British theatre is incredibly resilient, yet radically different from when I took up my post at the Guardian in 1971. Even the job of being a critic has altered in all sorts of ways. … But if the process – and the people who get to write the reviews – has changed, the role of the critic remains much the same.” – The Guardian

“While [he] was not as famous as underground comics stars like R. Crumb and Art Spiegelman, his artistic influence was nonetheless felt strongly, especially among other gay cartoonists. In the early 1980s he was the first editor of Gay Comix, a series of occasional comic books … He then developed Wendel, an adventurous strip about a man and his lover navigating the early years of the AIDS epidemic.” Cruse won multiple awards for Stuck Rubber Baby, a graphic novel that we might describe today as autofiction. – The New York Times

The latest piece by choreographer Allison Orr — known for creating dances performed by forklifts, sanitation trucks, and the like — is From the Ground Up, made for Wake Forest University’s Facilities and Campus Services departments. Hundreds of people gathered at the Quad to watch lawnmowers waltz, housekeepers twirl and heavy equipment dance. – Doug Borwick

In some years, narratives emerge, about innovation or stagnation, retrenchment or inclusion, celebrity, politics, source material. But 2019 seemed especially all over the map. Shows were big and small, hopeful and cynical, wired and tired. If you believe in theater as relational to real life, then life in America right now is fractured, disordered, with occasional dance remixes. – The Guardian

” ‘Amenities’ seems inadequate to describe how transformative the improvements could be for performers and audiences. I’d argue that the physical details of a concert hall are crucially important for classical music, more so than for other performing arts. With theater and dance, there’s much to watch and stories to follow. Opera is in this category. But an orchestra doesn’t offer the same kind of visual stimulation.” – The New York Times

“The Turner has always been premised on there being a winner. The award garners publicity, feeds the bookies and, apparently, generates discussion. It is all, supposedly, good for the climate in which contemporary art gets talked about. But artists whose works and attitudes have nothing to do with one another are often pitted against one another for no good reason.” – The Guardian

“The [$8.8 million operating] deficit, which followed four years of small surpluses, exceeds the previous record shortfall of $6 million in 2012, when the orchestra was mired in a contract dispute between management and musicians that resulted in a 15-month lockout. Yet orchestra President and CEO Michelle Miller Burns described the organization’s financial position as ‘strong.'” And, it turns out, she does have a point. – The Star Tribune (Minneapolis)

The now-veteran mezzo (age 53) has been artistic director of the Salzburg Whitsun Festival since 2012, but in 2023 she will take over her first full-fledged company, the Opéra de Monte-Carlo. – The New York Times

“Slaughter grounds thick with buffalo remains and a savaging of Thanksgiving myths are two of the highlights in the new wave of indigenous art heading for Britain.” – The Guardian

“It’s funny to think of art that is so topical and of-the-moment having such a long history. It’s a big deal when any regional dance company turns 30, but especially remarkable for one that has built its reputation not with mainstream classics but with political, psychological, dramatic works about such fraught topics as immigration, slavery, domestic abuse and civil rights.” – Hartford Courant 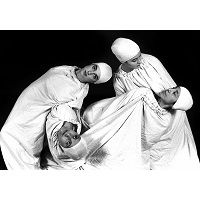