What we do know is that Aristotle viewed the present as something continually changing and that by the year 160, the Roman emperor-philosopher Marcus Aurelius was describing time as a river of passing events. And in the West, at least, many would still identify with these ideas. But physics tells a different story. – BBC

“On December 3, one day after Mira Dzhangaracheva resigned her post as director of the National Museum of Fine Arts in Bishkek, a commission of officials from the Culture Ministry confiscated half a dozen exhibits. Organizers the maiden Feminnale of Contemporary Art in Bishkek placed signs reading ‘censored’ in their place.” – Eurasianet

“Lyrics site Genius on Tuesday sued Google and LyricFind for $50 million, alleging they have been misappropriating its transcriptions for years. … [Genius] used a digital watermark to see if other sites were copying its product — and it spelled ‘redhanded’ in Morse code.” – The Hollywood Reporter

Like NYC’s Culture Pass, the new Experience Pass will let Free Library of Philadelphia cardholders reserve one free entry per year at some of the city’s cultural institutions. But the famous ones aren’t taking part (yet): the best-known of the 11 participating institutions are the Museum of the American Revolution and the Magic Gardens on South Street — along with the Mayor’s Box at the Wells Fargo Center, which means users could see 76ers and Flyers games. – Philadelphia Magazine

Venture to many blockbuster exhibitions, particularly on a weekend, and you’ll often be met with overwhelming crowds. Is there a surfeit of public interest in art? Are galleries packing in the crowds to maximise profit? And how best to meet the growing demand for public art without turning museums into amusement parks, complete with heavily managed queues? – The Guardian

“How is it possible that those of us raised on — or perhaps more accurately, raised by — Mister Rogers could have turned out to be so disengaged and sarcastic? Well, for starters, maybe because we are not as disengaged as we’re often described. (We are definitely as sarcastic.) But I think it’s also because the lessons Mister Rogers imparted are often placed, especially on the internet, into a general kindness and goodness box that doesn’t fully capture what he accomplished.” – New York Magazine

“The success of The Three-Body Problem” — the first translated novel to win a Hugo Award — “not only turned [author] Liu Cixin into a global literary star; it opened the floodgates for new translations of Chinese science fiction. This, in turn, has made Ken Liu a critical conduit for Chinese writers seeking Western audiences, a literary brand as sought-after as the best-selling authors he translates.” – The New York Times Magazine

A Q&A with Gia Kourlas “about examining his religious upbringing, performing the dances of a postmodern master while choreographing his own works and developing a close-knit dance family.” – The New York Times

During its 11-year run, “unadorned” has been the name of the game at Tiny Desk Concerts, whose appeal lies in the nakedness of its setup: no backing tracks, no Auto-Tune, no frills. The resulting performances — each taking place at Boilen’s actual desk inside NPR’s Washington, D.C. headquarters — offer viewers an intimate look at artists both emerging and major. – Billboard

Sure, it’s because of Jessica Fletcher, both an independent woman and a nice old lady who fights crime with a sharp eye instead of a gun. And the TV scripts were solid. Yet, observes Jon Land (who wrote that 50th novel), what made the franchise different from earlier crime series was the setting of Cabot Cove, Maine, “the kind of cozy place where nothing bad ever should happen, but always seems to.” – CrimeReads

“While this gesture is charged by the passion of a particular moment, it has huge implications for the future. It places the Tate and subsequent Turner Prize artists and juries in an invidious position. How can they now continue as normal? If the Tate wants the prize to go on, does it install new rules stating that there can be only one victor? That rather undermines this year’s winners.” – London Evening Standard

The four nominees had appealed to the jury to consider awarding the prize to them as a collective due to their shared commitment to urgent social and political causes. “At this time of political crisis in Britain and much of the world, when there is already so much that divides and isolates people and communities, we feel strongly motivated to use the occasion of the prize to make a collective statement in the name of commonality, multiplicity, and solidarity—in art as in society.” – Artforum

Like its more famous athletic counterpart, this international gathering, founded in Greece in 1994, happens (roughly) every four years in a different city. This year, for the first time, it’s in two locations, St. Petersburg, Russia and Toga, Japan, and it’s the longest and largest Theater Olympics yet, with 104 productions from 22 countries. – The New York Times

“Fontana, the first female writer on the show, … was perhaps second only to Gene Roddenberry, the series’ creator, in molding the sprawling Star Trek story-telling empire. … [She] wrote or co-wrote some of the most notable episodes of the original series, which ran from 1966 to 1969, and, with Roddenberry, co-wrote the pilot for its revival as Star Trek: The Next Generation in 1987.”. – NBC News

“The Church of St Savior in Chora, which was converted into the Kariye Mosque in the early 16th century by an Ottoman vizier, was designated a museum by the Turkish government in 1945. Its 14th-century frescos and mosaics are regarded among the world’s finest examples of Byzantine art. Turkey’s Council of State … ruled last month that the historic cabinet decision that made Kariye a museum was unlawful because a mosque ‘cannot be used except for its essential function’. … [President] Erdoğan vowed [during Istanbul’s municipal elections] in March to re-consecrate Hagia Sophia as a mosque.” – The Art Newspaper

From the Booker Prize to the Bad Sex in Fiction Award, this seems to be the year of shared accolades in the UK. The judges of the Turner, Britain’s leading visual art prize, split the honors between Lawrence Abu Hamdan, Helen Cammock, Oscar Murillo and Tai Shani at their explicit request, made “in the name of commonality, multiplicity and solidarity – in art as in society.” – The Guardian

“At a time when black creators are being celebrated as much as ever — from Hollywood to the fine arts — some are raising the question of whether black people are truly the main beneficiaries of the culture they produce. That theme is at the center of an exhibition opening on Wednesday in Miami, outside of the official Art Basel program, bluntly titled Who Owns Black Art?” – The New York Times

“Instead of filling The Sun’s pages almost exclusively with reports about crime and corruption in our city, thereby cementing its negative image locally and abroad, does The Sun not have a duty to also highlight and honor its amazing cultural life and support it every way possible, rather than just chide institutions for failing? – Baltimore Sun

It strikes me as strange to mourn a format, particularly when the new format has made storytelling more accessible and widespread than ever before. Virtual reality transcends literacy, language, ability and geography; it’s collaborative and adaptive and inherently empathetic, permitting us to walk any number of digital miles in someone else’s shoes; it’s even affordable, thanks to the team of rogue librarians behind @AlexandriaRising, who created the sliding-scale pricing system. – The New York Times

While it may be the right time for a newer or smaller gallery to try to get into the bigger fairs like FIAC, Frieze and Art Basel, the costs can be almost prohibitive. – The New York Times

The site’s editors wrote that the word “captures a sense of grappling with the survival — literally and figuratively — of our planet, our loved ones, our ways of life. … But, existential also inspires us to ask big questions about who we are and what our purpose is in the face of our various challenges.” (The runner-up: nonbinary.) – CNN 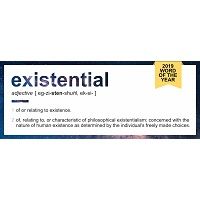