Elmar Hashimov writes about how he and his peers, the last generation of kids to grow up in the USSR, watched still-illegal American films (and learned English) on VHS tapes, dubbed on the down-low, inside parked transit vans tricked out with a TV and VCR. — The Atlantic

What always seemed most remarkable about the American Heritage Dictionary was its promise to be more discriminating than other dictionaries, and the evidence for this was always its panel of expert language users whose opinions were solicited on many contentious points of usage. This usage panel was presented as a major feature of the dictionary and became a point for endorsement and criticism. – The Weekly Standard

The current group of politically minded critics makes a different point. Greatness is a possibility, but only if you’re not politically benighted. The misogyny and racism of major authors don’t just make for bad politics; they make for bad writing. In parodying the stupid ways in which Updike, Philip Roth, or Ian McEwan describe women, feminist readers are offering a kind of aesthetic education — seeking to shame authors into no longer producing such horrible prose and less politically conscious readers into no longer appreciating it. – Chronicle of Higher Education

“When you walk through an exhibition in New York’s Museum of Modern Art, every step you take is part of a deliberate design that takes you from piece to piece in just the right way. And it all starts with a dollhouse-like version of the gallery and teeny-tiny art replicas called ‘chips.’ In this episode [of Slate‘s podcast Working], Jordan Weissman talks to Lana Hum and Mack Cole-Edelsack, director and senior design manager, respectively, of MoMA’s exhibition design and production department.” (audio) — Slate

Wait, what? Yes, after Sinclair fell afoul of the FCC, it’s Nexstar swooping in. “The deal would create a new king of local TV, unseating Sinclair Broadcast Group Inc. … Nexstar had been interested in Tribune last year before Sinclair had agreed to buy it.”

Whoa: “Researchers preparing for an exhibition on Victorian attitudes to childhood, called Seen and Heard, have found that Connie Gilchrist, the forgotten young musician in painter Frederic Leighton’s canvas entitled *The Music Lesson, was once the toast of England and appeared in many Christmas pantomimes in the West End of London as well as in countless burlesque shows” – oh, and she ended up as the Countess of Orkney. Not bad for a child born in a horrific Victorian slum.

With 32 episodes ordered for the talk show, and a reach meant to extend to 200 countries, Patriot Act is momentous for U.S. talk shows – and for Netflix. “Minhaj often uses phrases such as ‘our own community,’ or refers to the audience as ‘we,’ in his segments, as if everyone in the crowd shared a brown, Muslim psyche, like himself. A glance at the studio audience on any given Wednesday — the show airs every Sunday — indicates he’s not totally off.”

Glory Edim’s anthology Well-Read Black Girl got its start when she got a T-shirt with those words on it as a gift. Now she’s got a massive book club following, a book, a book tour – and the goal of bringing as many Black women writers with her as she can. “We can cherish and uplift black work and artistry across all genres in the literary space,” she says. “Also, we should be using social media and all its glory to uplift the new work that is being created.”

Whoa. The film about Queen Anne and two of her courtiers – and their rivalry – won “a record haul of 10 prizes, including best film, best actress for Olivia Colman, best supporting actress for Rachel Weisz and best director for Yorgos Lanthimos.”

As longtime artistic director Tony Taccone leaves and new AD Johanna Pfaelzer comes in, Berkeley Rep’s managing director, Susan Medak, explains how that transition is working. “Part of the culture is undeniably a result of Tony having been here for twenty-two years. … I’ve also been saying, ‘As long as Tony’s here, this is the way it will be. But let’s all remember that when Tony leaves, this may be very, very different.’ That’s been a hard thing for some people to absorb but very easy for others to absorb.”

When Nona Fernández delved into Chilean history in her novels, the reaction was “Why aren’t you writing about bulemia?” she says. Columbia writer Laura Restrepo, whose novel Leopard in the Sun was about violence between feuding drug lords, says a publisher told her she wrote like a man. “Misogyny is slow to leave the world of letters,” say seven authors – but this year, after decades, things seem to be changing.

Celebrities including Sting and Benedict Cumberbatch, the mayors of New York and London, and the former archbishop of Canterbury intervened with the Trump administration The Jungle was a hit in London, and “the creative team and producers were reluctant to move the play without all the cast members, saying their life experiences — several had lived in the Calais refugee camp being depicted — gave the show its authenticity. But trying to get two Iranians and a Syrian into Trump-era America to perform a drama that is inherently sympathetic to refugees was, to put it mildly, daunting.”

And for this, you can blame Uber.

Hengdian claims to be the world’s largest outdoor set – but there are 13 sets, and a creation of the Forbidden City that is only a bit smaller than the real thing in Beijing. 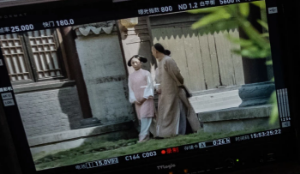