There is a real risk that scientific fact will eventually be reduced to just another opinion, even when those facts describe natural phenomena—the very purpose for which science was developed. – The Scientist

A video report on a prison choir in Argentina, founded by a psychologist to bring hope and encourage non-violent behavior, and an orchestra made up of migrant musicians in Rome. – Al Jazeera

“The play’s producers, Sonia Friedman Productions, declined to comment for this article, noting that the subject of Hermione’s race had been discussed at length when the play opened in London. But that was eight Hermiones ago. When asked to discuss the cultural significance of the casting decision in the era when diversity and inclusion have become priorities in theater, the producers rebuffed The Times‘ attempts to speak with the show’s director, actors or anyone else in the production.” – Los Angeles Times

The stock photo business is highly competitive, with Getty and its rivals, such as Adobe and Shutterstock, steadily cutting prices to keep market share. Last month, for example, Getty announced plans to move entirely to a “royalty-free” pricing model that would make stock images even cheaper for clients. But if lower prices have benefited Getty’s customers, they’ve also meant less money for stock photographers. – Seattle Times

Danville’s method relies on new reading science. It has roots in an old way of teaching but is based on new cognitive neuroscience research that has revealed how brains process sounds and symbols. It borrows from linguistics, the study of language and its structure. Students do not memorize lists of words for spelling tests, yet the average Danville fourth grader is spelling at the sixth-grade level. – Seattle Times

Retired journalist John Richards, 96, started the Apostrophe Protection Society in 2001 to make sure the “much-abused” punctuation mark was being used correctly. “We, and our many supporters worldwide, have done our best but the ignorance and laziness present in modern times have won.” – London Evening Standard

When a woman in a close-knit Jewish family gets divorced and moves in with her parents, her friends tell her she’s just like Mrs. Maisel. But she’s no comedian, she thinks. And then the first open-mic night beckons. – The New York Times

Khmer dance has ancient Buddhist, Hindu, and animist roots – and though it’s mostly performed by all female groups today, it used to be performed both by men and by women. Now, Prumsodun Ok wants to revive the male dances and to provide a means of expression for gay dancers. – BBC

Was it Scorsese on Netflix? Just Netflix in general – and Disney Plus, and Hulu, and and and? Or the weather? Whatever it was, the Thanksgiving box office took a sharp hit this year. – The New York Times

Do you remember ‘Cool Britannia’? If you don’t, or if the idea makes you cringe, that might partly be because of the PR disaster of the Millennium Dome’s opening night. “For a government famed for its supposed mastery of spin, it was about as bad as it could get. It crystallised the doubts that floated around the New Labour project: this spectacular container of not very much made an easy emblem of the government’s preference for style over content, its attachment to vacuous statements of modernity, its use of messaging and focus groups to deliver meaningless platitudes, its tokenistic approach to regeneration.” – The Guardian (UK)

Burgie, known professionally as Lord Burgess, said that the calypso hits he adapted and wrote for Belafonte “‘revolutionized music’ by introducing Afro-Caribbean rhythms to the pop mainstream.” – The New York Times

He was born and raised in Soviet-occupied Latvia and trained in what was then Leningrad; he became well-known in the West as music director of the Oslo Philharmonic and then the Pittsburgh Symphony. “In the first decades of this century he was frequently awarded the accolade of greatest living conductor. His tours in those years … with his two primary orchestras, the Bavarian Radio Symphony and the [Royal] Concertgebouw [Orchestra] of Amsterdam, were eagerly awaited events and rarely did they disappoint.” – The Guardian

Since the last bookstore closed, people in the town on Kodiak Island have had to use thrift stores and online purchases for their books. But two residents who moved back home to care for ill parents are changing that. One says, “I’ve been surprised to learn what a bookshop means to a community. … I inherently love books, and it was natural that that would be what we chose to pour all of our energy and passion into, but I didn’t realize how much people missed it in our town.” – Anchorage Daily News (Kodiak Daily Mirror) 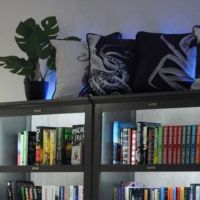