Code Listen is part of a multi-dimensional sequence begun in 2016, including workshops, discussions, music making and performances. Liu uses music to catalyze dialogue and healing around urgent issues of our times.  She seeks to reach beyond the traditional classical audience to a wider cross-section of the public. With Code Listen, Liu hopes to “create dialogue with homicide survivors and the wider community of people who have not (or think they have not) been directly impacted by homicide.” Her events see professionals joining with police officers, teens, school children and members of the public. Liu’s work challenges people towards reflection, innovation and change. – Exhale Lifestyle

“One of the biggest criticisms of the Peak TV era is the phenomenon of Netflix Bloat. We’ve all constantly got so much good television to watch that we’ve become much less tolerant when serialised programmes take their foot off the . … But with an anthology series, you can just dip in and out.” Problem is, “by their very nature, anthologies are notoriously patchy affairs. Every episode requires a brand new idea, and good ideas are hard to come by.” — The Guardian

A visit to the Zheen Archive Center in Sulaimani, where “two optimistic, broadminded brothers and an all-women team of crack manuscript preservationists are building a collection of books, manuscripts, and papers that have survived hundreds of years of language bans and the mass destruction of property” during Saddam Hussein’s anti-Kurdish pogroms and the attacks and occupations by ISIS. — The Believer

“Native people frequently note that the word ‘art’ is virtually unknown in indigenous languages. Today, making a living as an artist is mediated by market forces with demands of its own. At stake are complex dynamics that weave together identity and culture with non-Native expectations about value based on authenticity. This inevitably involves stubborn stereotypes born from lack of knowledge. It also means that the Native artist, no matter the genre or medium, wittingly or unwittingly is cast in the role of educator.” — Los Angeles Times

Spike Lee says, “This is a good time to be a filmmaker … the more places that stream, they need product. They need people, they need young people. And it gives filmmakers an opportunity because there’s just more outlets.”

Indeed, this was all a master class in PR spin. “It’s difficult to not see the WarnerMedia item as anything other than a previously determined property-maximization plan, reframed as a response to bad press.”

Afro-surrealist artist – and Ferguson documentarian – Damon Davis says, “We need to be able to imagine the world as we want to see it. … It can’t solely be based on anger because you’ll burn out.”

Most of us live in a state of general ignorance about our physical surroundings. It’s not our fault; centuries of technological sophistication and global commerce have distanced most of us from making physical things, and even from seeing or knowing how they are made. But the slow and pervasive separation of people from knowledge of the material world brings with it a serious problem.

The Hirshhorn Museum has an artwork that is generated and powered by visitors’ fingerprints and heart rates. Cool, right? But what about the data collected by this piece? Are you willing to just “give” away your fingerprint?

To understand the crisis liberal democracy faces today – whether we identify this primarily in terms of “populism” or “post-truth” – it’s not enough to simply bemoan the rising cynicism of the public. We need also to consider some of the reasons why trust has been withdrawn.

Contemporary work on music perception embraces a variety of disciplines and methodologies, from anthropology to musicology to neuroscience, to try to understand the relationship between music and the human mind. Researchers use motion capture systems to record people’s movements as they dance, analyzing the gestures’ relationship to the accompanying sound. They use eye tracking to measure changes in infants’ attentiveness as musical features or contexts vary. They place electrodes on the scalp to measure changes in electrical activity, or use neuroimaging to make inferences about the neural processes that underlie diverse types of musical experiences, from jazz improvisation to trance-like states to simply feeling a beat.

While it undoubtedly generates interest, what is actually gained from watching conservators working? Conservation has become an increasingly painstaking and intricate process, in which the conservator might sit for hours peering through a binocular microscope making, at the most, small twitching movements with a cotton swab or scalpel, or entering extensive documentation of observations on a computer. This has limited appeal for a visitor.

“[He] was one of a generation of artists who embraced the Minimalist credo, along with Donald Judd, Carl Andre, Dan Flavin and others. But while his peers continued to work within the genre’s austere limits, Mr. Morris went on to explore an astonishing variety of stylistic approaches, from scatter art, performance and earthworks to paintings and sculptures symbolizing nuclear holocaust. His detractors, noting his tendency to borrow ideas from other artists freely, questioned his originality and authenticity. His supporters saw in him a mind too restlessly alive to the possibilities of art to be confined to any one style.”

One thing is certain: if the case does go to court and Elizabeth Rowe prevails, the impact on the symphony world will be profound. While it is true that the law on which this case is based is limited to Massachusetts, there would likely be a strong effort on the part of many musicians to argue that the precedent should apply to them.

Anna Burns, who took the 2018 award for her novel of Northern Ireland during the Troubles, Milkman, suffers severe back and nerve pain due to botched surgery some years ago. “Thanks to the Booker, which includes a $64,000 prize, she may get treatment in Germany without having to worry about the cost. ‘If it’s successful, I’ll be able to write again,’ she said. ‘I haven’t written in four and a half years.'”

In a Q&A with David Patrick Stearns, the music director of the two institutions says of new operas in the works from composers Kevin Puts and Mason Bates, “We will be workshopping these pieces in collaboration with the Curtis Institute. The Philadelphia Orchestra will premiere the scores in a concert presentation prior to the full production at the Met.”

Mr. Nézet-Séguin, who had originally been set to assume the post in 2020, moved up his start date to take a stronger musical hand at the opera house after the allegations against Mr. Levine came to light. And although it will be a few seasons before he takes on his full workload at the Met and implements some of his plans for commissions and collaborations, he is already making his presence felt.

Mr. Morris was one of a generation of artists who embraced the Minimalist credo, along with Donald Judd, Carl Andre, Dan Flavin and others. But while they continued to work within the genre’s austere limits, Mr. Morris went on to explore an astonishing variety of stylistic approaches, from scatter art, performance and earthworks to paintings and sculptures symbolizing nuclear holocaust.

Jamaica applied for recognition of its musical tradition at a meeting of the UN in Mauritius this year. “It is a music that we have created that has penetrated all corners of the world,” said the country’s culture minister Olivia Grange.

After its Academy Award wins, “Shakespeare” became Exhibit A when people claimed that a studio can buy an Oscar. Miramax certainly waged a hefty campaign for the movie, but it’s likely the “buy an award” theory was invented by rival studios who lost out that year and assumed it was a matter of spending rather than taste; their claims received widespread coverage on the then-expanding internet. But if the theory were true, why did “Shakespeare” win only seven of its 13 nominations? Why not a clean sweep?

“The average top-price ticket across all West End shows is £117.52, up 19% compared with 2017. This is the first time the average top-price ticket has exceeded £100, since The Stage started surveying in 2012. … For the first time in six years, The Book of Mormon has been overtaken as the most expensive seat across the entire West End by Hamilton, which has top-end tickets costing £250.” 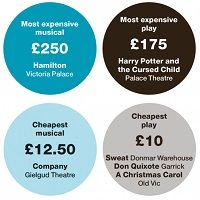