Says a former theatre student of Baldwin Wallace University’s Victoria Bussert, “Theatres have shut down everywhere, and this woman is just like, ‘Fuck that! We’re doing a play, we’re doing theatre. Give me hoops—I will jump through them, but I will make it work.'” – American Theatre

The urgency of this vision has never been more apparent than in 2020—amid a global pandemic, heightened focus on social justice and racial equity, a huge economic downturn, and a contentious presidential election. These issues have impacted every community across the country and devastated artists, nonprofit and for-profit creative businesses, educational systems, healthcare, and trust in government. And because of long-term systemic inequities, these challenges have more severely affected people and communities of color. – Americans for the Arts

The Scottish-American writer’s debut novel follows the title character, an impoverished boy in 1980s Glasgow, “as he attempts to care for his alcoholic mother, Agnes, whose descent into alcoholism coincides with her youngest son’s growing awareness of his sexuality. The novel is dedicated to Stuart’s mother, who died of alcoholism when he was 16.” – The Guardian

Katherine Chu and Juliet Petrus, both alumnae of San Francisco Opera’s Merola/Adler young artists’ program, have written “the first book to introduce Mandarin as a language for singing, with a detailed explanation for the creation of sounds and a system for learning them. … Singing in Mandarin combines a brief study of linguistics, notes about the history of China and Taiwan, the development and significance of Pinyin …, a wealth of information about Mandarin pronunciation, and scores with multilingual text of Chinese [art] songs.” – San Francisco Classical Voice

“Mr. White, who played the oboe, saxophone, bass and other instruments, performed and recorded for more than five decades” in classical and rock as well as jazz. … “He self-produced more than 40 albums of his music, encompassing contemporary jazz, classical oboe, funk, and rhythm and blues. He self-published [an] autobiography … as well as treatises on music, educational manuals and his original compositions and transcriptions.” – The Washington Post

“We remember and we forget. Lots of people know that marijuana makes us forget, and researchers in the sixties and seventies wanted to understand how. They discovered that the human brain has special receptors that perfectly fit psychoactive chemicals like THC, the active agent in cannabis. But why, they wondered, would we have neuroreceptors for a foreign substance? We don’t. Those receptors are for substances produced in our own brains.” – Paris Review

The knowledge sector’s insistence that productivity is a personal issue seems to have created a so-called “tragedy of the commons” scenario, in which individuals making reasonable decisions for themselves insure a negative group outcome. – The New Yorker

“I think that caused me to be really clear for myself about why I was doing what I was doing. I could not take into consideration how people would respond. That included funders and audiences. Part of the risk, then, is that maybe nobody will show up. But when I tried to make things that I thought would please people, I thought those pieces were disasters.” – Dance Magazine

“We talked to nearly 30 [Jeopardy!] contestants [from] over the past four decades — ranging from a player in the first episode to one whose winning moment went viral just earlier this month — about how Trebek became America’s most beloved game-show host.” – The Washington Post

Johanna Anderson said the situation had become so financially serious for university libraries that it was time for MPs and competition authorities to hold publishers to account. She cited the example of an economics book that costs £44 for a print copy but is £423 for a single e-book user and £500 for three users. An employment law book costs £50 for a hard copy, but is £1,600 for three users of the digital version. – BBC

At the beginning of the lockdown more than two weeks ago, the Paris mayor, Anne Hidalgo, pleaded – unsuccessfully – for bookshops to be allowed to remain open and asked the public not to use Amazon. The call has been echoed by the former president François Hollande. – The Guardian

“Some people were willing to forego their meagre ration of food and forget their fatigue to attend the artistic performances in the concentration camp. For me this is a potent reminder to challenge crude approaches to ranking basic human needs and the components of a decent human life.” – Aeon

Heidi Schreck’s What the Constitution Means to Me has become “the grandmother of [a] genre” that includes, just this fall, Kristina Wong for Public Office (about Wong’s run for a local commission in Los Angeles), Lessons in Survival (actors repeating, complete with pauses and tics, observations of prominent Black Americans about society), Denis O’Hare’s What the Hell Is a Republic, Anyway? (using the history of the Roman Republic to examine the American one), and Melissa Dunphy’s The Gonzales Cantata (an oratorio setting the 2007 testimony of George W. Bush’s Attorney General before the Senate Judiciary Committee). Jesse Green looks at these pieces and considers “what it means for performers to take public policy as their script at a time when policymakers seem to be taking public performance as theirs.” – The New York Times

He captured some of the most memorable journalistic images of key events of the late 20th century: the 1968 riots in Paris; the Troubles in Northern Ireland; the Biafran war in Nigeria; the Solidarity demonstrations in Poland; the first Gulf War and the burning of the Kuwait oil fields by retreating Iraqi troops. – The New York Times

Is Trump like King Lear, raging naked on the heath and desperately hanging on to the increasingly diminished trappings of power even as they are stripped from him? Or is he more like Bartleby the Scrivener, the inscrutable model of passive resistance who one day declines to do any more work or indeed leave the building, declaring: “I would prefer not to?” – The New York Times

The arts exist as a smaller bubble within the larger bubble of liberal media culture. And doubling down on affirming the sense of enlightened cultural superiority has larger potential negative consequences. – Artnet

It became evident to me that companies that had a strong relationship with their audience base before the pandemic had seen continued support. Theatres like Cape Fear Regional Theatre, which specializes in “edutainment” (a combination of performance and education), received an outpouring of verbal support from parents who were overjoyed that their child could go to a sanitized and physically distanced afterschool environment and have a sense of normalcy. – HowlRound

The most radical change that instant information has made is the levelling of content. There is no longer a distinction between things that everyone knows, or could readily know, and things that only experts know. – The New Yorker

“I don’t think you necessarily have to own it to appreciate couture. It’s like art. I don’t really like when people talk about fashion as art. Fashion is fashion. Art is art. But yes, I don’t think that you have to own art in order to appreciate art. You can go to a museum and you can appreciate paintings and whatever you like. So why not for couture? – Washington Post

In June of 2015, a pair of hobbyists carrying metal detectors came upon a hoard of extremely rare gold coins and jewelry, in astonishingly good condition, that came from the old Anglo-Saxon kingdom of Mercia and had almost certainly been buried by the marauding Vikings who plundered it. Great Britain has fair but strict laws governing the discovery of ancient treasure — laws that these gentlemen had skirted when they stumbled on the hoard and flouted after they found it. As Rebecca Mead reports, the men came to a predictably bad end, but much of the treasure is still missing. – The New Yorker 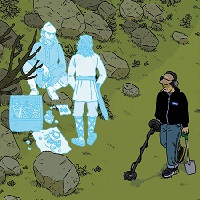