“As cities, counties, and states update outdated bridges, upgrading their lighting systems to LEDs is inevitable. With that move comes the opportunity to throw in some low-cost civic razzle-dazzle.”

Collins Dictionaries’ choice was Brexit. Their Oxonian colleagues didn’t opt for Brexit or for any variation on Trump; what they did choose is all too relevant to both.

At issue is a digital artwork showing an image of the Virgin Mary: press a button and it shatters. (The artist says the piece is about iconoclasm.)

“They are dark and bleak and often end in death. Some double as articulations of the political exceptionalism of ordinariness itself. Most, though, do something more basic, and more pessimistic: They assume the fundamental dirtiness of politics, and the related idea that any hope we’ll have of purifying the system must come from outside of it. They leave very little room for optimism about the hulking beast that is “the establishment,” very little room for hope that the system in place—one populated by career politicians—can take compassion and make it scale.”

Scott Timberg follows the trail, from Cohen’s discovery by Judy Collins and then Fairport Convention through Gen X grunge and alt-rock up to today.

The 93-year-old, who was the orchestra’s music director for 19 years and remains beloved there, had surgery following the stroke on Sunday.

“The companies with the financial resources and the political clout often impose a uniformity on the consumption of the music they believe is popular and therefore profitable. Given the ubiquity of their total command of the internet, the “world” becomes their colony and the “popular” tastes rule, again to the detriment of the indigenous music, but also to art music and to any other music with a limited audience and appeal. This scenario has forced indigenous music and even our beloved ‘classical’ music into competing with everything—sports, popular music, even each other.”

Turns out that the habits, discipline and creativity of dancers offers excellent lessons for business leaders…

Time was that St. Louisans said “good marning” and ate “carn on the cob.” Then along came I-55 and the Northern Cities Vowel Shift.

“Specifically, they found the mean annual income for male artists was $63,061, compared to $43,177 for their female counterparts. After further crunching the numbers, they report that a variety of factors that could influence income — including age, education, one’s specific artistic discipline, and the number of hours worked — only accounted for about one-third of that difference.”

“For the artists to figure out a way to be in a conversation with this audience — a whole community of new eyes — is really exciting. Navigating that common space and figuring out what can be done to engage with this crowd while also what can be done to make things happen outside of that space.”

The incoming music director of the Metropolitan Opera, Yannick Nézet-Séguin, writes a tribute (with anecdotes) to his predecessor, James Levine.

He combined the mordant blues of his native Mississippi with sophisticated jazz rhythm – and he became a sort of minor deity to the ’60s and ’70s rockers who covered his songs. And those songs could be biting: “What Do You Do After You Ruin Your Life?”, “Your Mind Is On Vacation (But Your Mouth Is Working Overtime),” and “Everybody’s Crying Mercy.”

It’s the second-highest price ever paid for a Munch (after you-know-what). Yet it was the only bid on the painting, and that was by a party that guaranteed the sale. In fact, the entire evening was disappointing sales-wise.

The man Yo-Yo Ma considers a mentor became BSO principal in 1964 and co-founded the Boston Symphony Chamber Players in 1967.

Your organization sucks at ‘community’ and let me tell you why

by Ronia Holmes, Assistant Director of Communications for Arts + Public Life at the University of Chicago … read more

Mose Allison has died at the age of 89. A Mississippi pianist, singer, composer, songwriter and sometime trumpeter, Allison made his New York debut in the 1950s as a bebop pianist. … read more

Propwatch: the lace in Giselle

It’s only a moment. Giselle, a migrant seamstress made rootless by a changing world, confronts the dauntingly affluent Bathilde. Their encounter ripples with instinctive distrust (unwittingly, each loves the same guy; this is ballet). … read more

Bill Marx looks at the Wall Street Journal and New York Times’ cutbacks in arts coverage: “Too many of today’s arts editors and reviewers embrace a lilliputian vision of arts criticism, a crabbed sense of its possibilities. I teach a class at Boston University on writing arts criticism, and can testify that most of these wanna-be critics have not read any reviews that date earlier than 2000.”

“Traditionally, the humanities (history, literature, art, philosophy, etc.) have provided a place for broadening life in the democracies. Today universities have become a site for a bitter struggle between no-nonsense job training and the grander possibilities of the imagination.”

“You can find aspects of vagueness in most words of English or any other language. Out loud or in our heads, we reason mostly in vague terms. Such reasoning can easily generate sorites-like paradoxes. Can you become poor by losing one cent? Can you become tall by growing one millimetre? At first, the paradoxes seem to be trivial verbal tricks. But the more rigorously philosophers have studied them, the deeper and harder they have turned out to be. They raise doubts about the most basic logical principles.”

The art market has expanded enormously, but despite many schemes, selling art online in a big way has been elusive. “Most of its incumbent players recognise that technology is powering the sheer volume of interest in the market, but believe that, for now, it is more of a tool than a game changer.”

Performances are now cancelled through the first week in December. 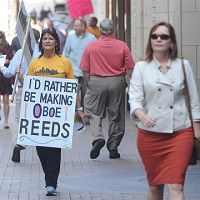